'The Budget will have to be substantially re-cast as soon as a new government takes charge after the elections.'
'Both revenue and expenditure numbers will have to be trimmed -- and then may better reflect the deceleration of economic activity caused by slowing consumption trends,' points out T N Ninan.
Illustration: Uttam Ghosh/Rediff.com 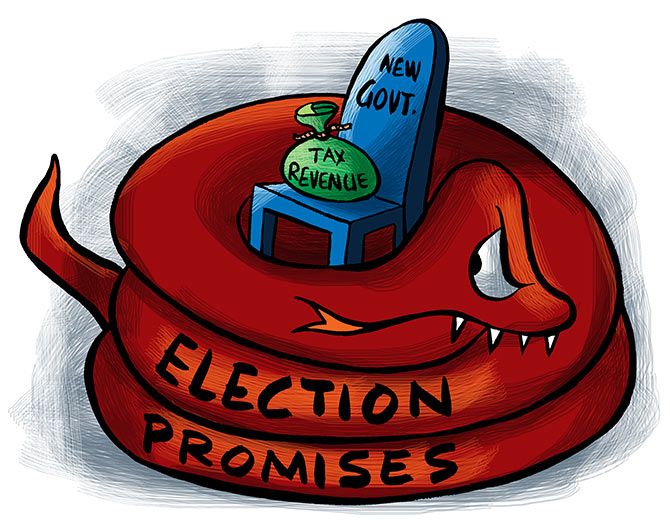 The tax revenue numbers recently published are a shock.

They show a shortfall of Rs 1.6 trillion, when compared to the revised revenue numbers for 2018-2019 presented to Parliament three months ago.

That represents over 0.8 per cent of gross domestic product.

Some of the shortfall would have been compensated by a last-minute squeeze on expenditure, reported at the year-end to have been about Rs 60,000 crore.

Taking that as accurate, the fiscal deficit numbers for the year would have gone up from the reported 3.4% of GDP to about 3.9% -- clear slippage from the levels of the last two years.

The numbers are a shock for a further reason: The Centre's revenue growth clocks in at only about 6.2%.

It is understandable if this falls short of the ambitiously budgeted revenue growth of 19.5%.

What is more worrying is that growth in gross collection (including the states' share), at 8.4%, falls short of GDP growth (in nominal terms, ie including inflation) of 11.5%.

In other words, the trend of an increasing tax-GDP ratio has been reversed.

Some of the shortfall may have been on account of the progressive cutting of rates for the goods and services tax.

But there is the possibility that real economic growth (adjusted for inflation) may be less than the officially reported 7%.

The implications for the current year are grim.

On the real revenue base that has emerged, tax collection would have to grow 29.1% in order to meet the new year's Budget numbers.

Since that is impossible, the Budget will have to be substantially re-cast as soon as a new government takes charge after the elections.

Both revenue and expenditure numbers will have to be trimmed -- and then may better reflect the deceleration of economic activity caused by slowing consumption trends.

Since much of government expenditure is on pre-committed items like interest payments, subsidies, salaries and pensions, the axe will fall (as it did late last year) on investment in the physical infrastructure, an important driver of growth so far.

In terms of the growth outlook, some factors have improved -- like the global economic situation, and receding prospects of a US-China trade war.

Oil prices have climbed, but various oil exporters may up output to neutralise the stoppage of supplies from Iran.

Domestically, the monsoon prospects are less than optimal, while two lead sectors (aviation and automobiles) have taken a toss and a third (telecom) has seen value destruction, even as construction remains dependent on government spending.

The financial and corporate sectors have come through the worst of the twin crises of bad loans and excessive debt, and credit has picked up.

But much cleaning up remains to be done, and further systemic shocks cannot be ruled out.

Monetary policy has tried to support growth, but the Reserve Bank's rate cuts find no echo in a liquidity-constrained market for a variety of reasons, including the level of government borrowing.

This is a sobering context in which to consider the promises of expansive handouts as part of the election campaign: Loan write-offs, cash payouts, and possibly a higher food subsidy.

As should be obvious, there simply isn't the fiscal space for all of this, or indeed any of it.

When the limits of monetary policy are being tested, the fisc has to be in contractionary mode -- especially since the official deficit numbers conceal off-balance sheet borrowing.

As it is, the ratio of government debt to GDP remains above the limits reckoned to be desirable.

The danger is a post-poll government being tempted to go the other way, taking comfort from moderate inflation and opting for expansionist policies in order to deliver on unaffordable election promises or in pursuit of unrealisable growth objectives -- precisely the kind of policy heresy being heard currently in some other countries.