'Achche Din has become an albatross around Modi's neck'

'The middle class stood by the BJP, especially after demonetisation, and they expected something in return.'
'Some section of the BJP believes the middle class is condemned to vote for the BJP as they have no other choice.'
'They think they can treat them any way, still the middle class will run to vote for it.'
'That's what the Budget seems to convey.' 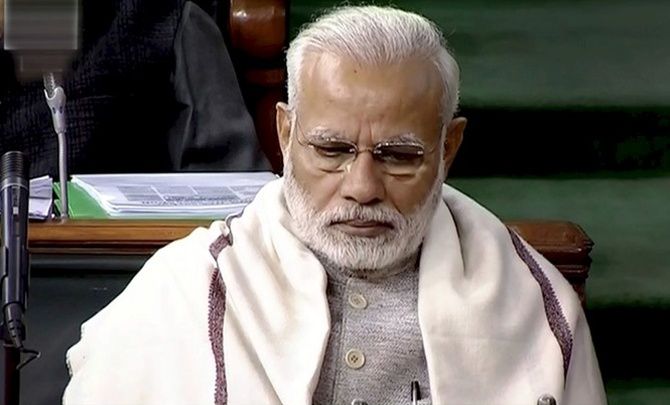 "Giving Rs 40,000 standard deduction and taking away other benefits worth Rs 35,000. And increasing cess. These are all tactless decisions. You either give or not give, but what Jaitley has done is irritate the middle class," M R Venkatesh, chartered accountant, political commentator and lawyer, tells Rediff.com's Shobha Warrier.

What were your first thoughts after Finance Minister Arun Jaitley finished presenting the Budget 2018?

Let us look at the two big schemes announced in this Budget -- one, the national healthcare scheme, and the other the Minimum Support Price.

You may not have planned the last mile at the time of Budget, but one should have a broad plan for such a scheme like national healthcare for 50 crore people.

You do not give these details post-Budget or six months later as it robs the Budget of its sanctity.

I would have expected him to be more precise and embellish his Budget with more details. That's why I say it could have been packaged better.

Since both schemes need a budget and time to be implemented, don't you think if they had announced them earlier in the term, we would have seen some results by now?

I am very much in favour of the healthcare scheme, but I feel increasing the MSP is not the right way to address the agrarian crisis.

If you want to address the agrarian crisis, you have to first look at the most important needs of farmers like water, electricity, crop insurance, fertiliser, etc.

Only when all these are addressed, they can produce crops and when crops are produced in excess, an increase in MSP makes sense.

Some 80% of our farmers are small and marginal farmers and an increase in the MSP will benefit only 20% of the farming community which are mostly in Punjab and Haryana.

When 80% of the farmers are not producing sufficiently to bring the produce to the market, how is an increase in MSP going to benefit them?

Another issue that we cannot forget is that, if you increase MSP, prices of agricultural produce will increase and that will lead to cascading effect on inflation.

In fact, the government has benefitted from lower inflation in the last three years as it has not recklessly increased the MSP.

You should understand that nothing comes free in economics. Cause and consequence are inter-linked.

The government has a 5-year mandate and they can do anything in the five-year period.

Yes, I don't think these schemes are going to bring instant benefits for the BJP politically as it will take at least six months for the rollout for the healthcare scheme to happen.

As for MSP, the kharif crop will happen in September-October.

Another thing is, to implement these schemes, you need the NITI Aayog, the central government and the state governments to work together, which is a tall order.

Won't the farmers understand that the government announced the schemes with only elections in mind?

According to me, an increase in MSP is aimed at the Jantar Mantar lobby and the Lutyens media, and it has nothing to do with agriculture.

It is just a political management of the situation.

Instead of yielding to the lobby, the government should have increased availability of inputs like water, electricity, seed, etc.

When there is no water in Thanjavur or in Karnataka, where is the produce?

They should have addressed issues like water availability, water storage, drip irrigation and credit improvement. Then an increase in MSP makes sense.

Other than a pat on the back by the finance minister saying the salaried middle class paid more taxes, the middle class was ignored in the Budget. Do you feel the angry middle class and urban India which has stood by the BJP till now will desert the party in 2019?

I agree with you that the middle class is disappointed and their disappointment is palpable.

The middle class stood by the BJP, especially after demonetisation, and they expected something in return.

The questions they ask are, we pay taxes honestly year after year.

We have never evaded tax. What is it that we got?

But to evaluate a Budget merely on increase in personal tax slabs would also be ridiculous.

Also, giving Rs 40,000 standard deduction and taking away other benefits worth Rs 35,000. And increasing cess.

These are all tactless decisions. You either give or not give, but what he has done is irritate the middle class.

Don't you think the BJP is taking the middle class for granted?
After the Budget, HRD MInister Prakash Javdekar said the middle class is happy as what they want is better roads, better educational institutions, better hospitals and not tax cuts...

I guess some section of the BJP believes that the middle class is condemned to vote for the BJP as they have no other choice.

They think they can treat them any way, still the middle class will run to vote for it. That's what the Budget seems to convey. At least that is what I decipher from the Budget.

But let me hasten to add that Javdekar is right to a certain extent about not increasing the slabs, but he has also to explain where are the roads he promised last year with our taxes?

Where are the excellent educational institutions?

Where are the low-cost housing?

If there was extraordinary development in 10 places like smart cities coming up, people may even say, increase my taxes, I don't mind.

But where do you see such extraordinary development?

As I have been repeatedly pointing out, the bureaucracy is virtually not able to deliver. And that is adding fat to the fire.

The government has to deliver. It cannot give excuses. People want results.

If things don't happen, they have to get it done. That's why they are elected.

In the Budget, the finance minister did not directly talk about creating jobs.
With the GST almost in place and recapitalisation of public sector banks with stress on the MSME sector, do you think he expects buoyancy in the economy and the job scene to improve?

By putting money on infrastructure, railways and recapitalisation of banks and GST in place, you can expect more people to get employment.

If 7.5% growth is going to take place, some employment creation will automatically happen.

Today, for 7.5% growth, you will not have 7.5% increase in employment for a variety of reasons and you cannot blame him for that.

But definitely some growth in employment will take place.

What the FM can do is to improve the overall economic mood like whether a person can set up a factory easily, whether he can go ahead without being harassed by various officials, etc.

In reality, even today pain points exist while investing in India. The fact is, those pain points are still not addressed properly.

Yes, there is an overall improvement, but the pain points still exist in many industries.

India is so huge that we have to address each industry separately.

Now I see a huge crisis coming in the software industry. My complaint is, they are not looking at this in a systematic manner, but only in a general way.

Who will be happy with this Budget?

Probably, the farmers of Haryana and Punjab.

Mr Modi promised millions of jobs in 2014. He also promised to present a report card while facing the people in 2019. What kind of report card will he present?

No prime minister in India can ever win an election solely based on economic performance.

People have won elections only by emotionalising the electorate.

Even if you have created jobs, it is impossible to provide 100% jobs in this country. There will be many people grumbling about not having enough.

The fact is, you cannot have milk and honey flowing on the roads. There is no economic utopia.

Even if you have 10%, 15% growth, people will be unhappy and dissatisfied. That's the kind of expectation everybody has.

An average Indian now wants the roads of Singapore, healthcare of Canada, efficiency of Germany... That's the kind of aspiration level people have now, thanks to Narendra Modi. Paradoxically that is coming to haunt him now.

The very people who remained silent for six decades now want action in a jiffy. It would seem that it was Modi's fault that he promised such Achche Din and raised the aspiration levels of the people!

Achche Din was never defined and each person defined Achche Din according to his own imagination.

Now, Achche Din has become an albatross around the neck of Narendra Modi.

With a young and impatient population on one hand and a dysfunctional delivery mechanism on the other, Modi has his job cut out.

If elections are called today, the BJP will be at a disadvantage because there is a feeling that the government has been unable to deliver certain economic policies.

But how will the situation be in 2019, nobody can say as elections are not fought on economic issues alone.

Yes, economic performance is a major issue, but there are many other issues too.

Let me reiterate no prime minister can ever win based solely on the economic performance of his government alone.