Mr Modi should be conscious that it was his choice to slash the number of tax-payers from 60 million to 15 million, notes T N Ninan.
Illustration: Dominic Xavier/Rediff.com The prime minister has drawn attention to the fact that only 15 million people in India pay income tax.

He is right to complain, since more than that number buy two-wheelers in a year.

The total two-wheeler population is about 180 million.

It is therefore not unreasonable to expect that someone earning enough to own a scooter or motorbike should be paying income tax.

Unfortunately, less than 10 per cent do.

So Narendra Damodardas Modi is right to complain, but he is the wrong person to be doing it.

For, while Mr Modi puts the blame on citizens for the small number paying tax, asking them to pay taxes honestly, he should also be blaming himself or his finance minister of 2019, who in the run-up to the Lok Sabha election that year exempted from tax all those earning up to Rs 5 lakh.

That allowed a reported three-quarters of all tax payers to get out of the tax net.

Pre-election giveaways are par for the course, but Mr Modi should be conscious that it was his choice to slash the number of tax-payers from 60 million to 15 million.

In the US, a single person starts paying income tax at an income level of about $12,000, which closely parallels the level of the poverty line for an individual.

Couples filing together must earn twice that before they are obliged to pay tax.

Importantly, the tax-paying threshold is about $25,000 for a four-member family, broadly the same level as the poverty line for such a family.

There is logic to these numbers.

The implicit principle seems to be that once you are above the poverty line, you should pay tax.

That is the picture in the UK as well.

While the country has many definitions of poverty, tax kicks in at broadly the level of poverty line income, which is about 12,000 pounds.

Compare this with India, where the tax-paying threshold is now multiples of the income for a family at the poverty line.

It is also twice the level of the household income for an average family of four, at about Rs 2.5 lakh.

This figure was in fact the tax threshold till a year ago, before it was doubled to Rs 5 lakh.

The primary problem, therefore, is not with the taxpayer; rather, it is with the tax rules that have taken the tax threshold to much too high a level.

You would quadruple the number of people paying tax if the tax threshold were to be reverted to its earlier level.

There is an issue with the tax rates as well.

India starts with 5 per cent, whereas in Britain the lowest rate of tax is 20 per cent.

In the US, it is 10 per cent at the federal level, plus varying rates at state levels.

Here, according to the latest rules, you have to reach Rs 10 lakh, or four times the annual income of an average family of four, before you start paying tax at 20 per cent.

The fact is that income tax rates in India kick in at too high an income level, and at unusually low rates.

The government's other failure, it would seem, has been to carry through the cross-checking of tax returns with the spending and saving habits of the individual concerned -- like foreign travel, vehicle ownership and level of electricity consumption.

Since the permanent income tax number has to be disclosed for most high-value transactions, effective cross-checking should have been able to catch most tax evaders.

While it is indeed true that demonetisation and other measures sharply increased the number of people filing tax returns, the overall situation today is manifestly disappointing.

The prime minister is therefore right in what he said.

But it is his government that has added to the problem.

And it is in its power to change the situation -- if it has the stomach to ignore the inevitable howls of protest from a very vocal middle class. 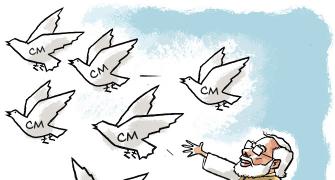 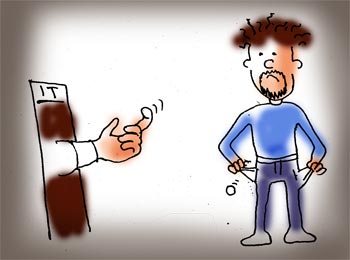