News
Business
Movies
Sports
Cricket
Get Ahead
Money Tips
Shopping
Sign in  |  Create a Rediffmail account
Rediff.com  » Business » Why is unemployment in India so 'volatile'?

'In India, a large proportion of the labour force does not have a regular job.'
'People are mostly employed as daily wage workers, agricultural labourers, small farmers and self-employed traders.'
'These move in and out of "jobs" fairly rapidly.'
'It is the high proportion of these workers in India that makes unemployment volatile,' explains Mahesh Vyas.
Illustration: Dominic Xavier/Rediff.com

The unemployment rate fell to 5.6 per cent during the week ended October 29.

Given that the unemployed are of the order of 25 million, this implies that a few million people move in and out of being employed or unemployed.

Are such changes for real?

Do people move in and out of employment in such large numbers over a week?

Or are these changes a reflection of sample changes from one week to the next?

Vivek Moorthy, economics and social sciences professor at the Indian Institute of Management, Bangalore, raised this question to me in a recent conversation.

He pointed out that volatility of the unemployment rate in most developed countries is quite low. A small change in the rate indicates a change in economic conditions.

In fact small changes can move markets. In comparison, the month-to-month volatility in India is much higher than in the US -- too high for comfort.

Professor Moorthy's observation is bang on, but his concern may not be.

No wonder the Indian financial markets don't give a penny. They have been on a nearly perpetual roll.

No one quite knows why they keep rising relentlessly, but nobody cares because it's making many rich and who would like to spoil such a profitable party.

Back to Professor Moorthy's question on volatility of the unemployment rate.

It is true that the unemployment rate in India is a lot more volatile than in developed countries.

We study the period January 2016 through August 2017 since this is the period for which we have data for India, thanks to the BSE-CMIE partnership in producing such statistics.

We compare the volatility of monthly series of unemployment rate over this 20-month period.

Interestingly, this period can be divided equally into a pre-demonetisation and a post-demonetisation period as November 2016 sits exactly at the centre.

Over this period, volatility of the monthly unemployment rate in India is much higher than in Organisation for Economic Co-operation and Development countries.

The coefficient of variation was 8.3 times higher. But this period contains multiple shocks of demonetisation and the goods and services tax.

It could be useful to see the volatility before these shocks became effective.

During the 10 months of January through October 2016, volatility of the monthly unemployment rate was 7.7 times that in OECD countries.

So, the high relative volatility cannot be explained by the shocks.

The post-demonetisation period did see a substantial increase in the volatility of the monthly unemployment rate.

The coefficient of variation increased from 8.8 per cent (pre) to 23.5 per cent (post).

Since there is a huge difference between the pre- and post-demonetisation periods, the overall coefficient of variation is even higher at 32.5 per cent.

During recent times no country has faced economic shocks like India has and therefore it is not a good idea to compare its data for the entire period with the others.

But it should be perfectly fine to make such a comparison for the period before demonetisation.

The coefficient of variation for India during this period is 8.8 per cent. The closest among OECD countries is Hungary at 7.2 per cent.

It is apparent that high volatility is not uncommon. It is the nature of employment that plays an important role in determining volatility of the unemployment rate.

In India, a large proportion of the labour force does not have a regular job. People are mostly employed as daily wage workers, agricultural labourers, small farmers and self-employed traders.

These include the assortment of plumbers, masons, cargo loaders, badli workers, etc. These move in and out of 'jobs' fairly rapidly.

It is the high proportion of these workers in India that makes the unemployment time-series volatile.

What is useful to see in the monthly unemployment rate series is that there is a trend. It is not random. It therefore does carry useful information.

But I'd like to not waste Professor Moorthy's observation. It would be useful to add a new series to the unemployment rate -- one that is based on only the organised sector. We should expect low volatility in this. 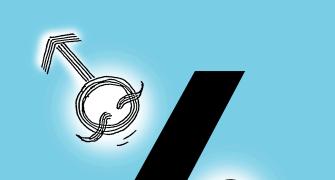