US equities resume uptrend amidst surging dollar and crashing commodities

A resurgent US dollar is the key feature of the current scenario and its value continues to drive other markets, from euro, yen to the INR.  Most currencies continue to seek lower valuations against the greenback. This trend is likely to continue until the dollar peaks out by yearend at around 89 as opposed to 84.5 right now, says Sonali Ranade

The interest rate cycle continued its ponderous upturn. The churn is far from over and yields on 10-year US Notes flared up to 274 basis points. We may be headed into yields as high as 300 bps pretty soon. The fixed income markets continue to be in a flux while equity markets now appear to take rising yields as an affirmation of future growth of GDP. Commodity markets continue to tank with rising yields.

A resurgent US dollar is the key feature of the current scenario and its value continues to drive other markets, from euro, yen to the INR.  Most currencies continue to seek lower valuations against the greenback. This trend is likely to continue until the dollar peaks out by yearend at around 89 as opposed to 84.5 right now.

A rising dollar and higher interest rates are roiling commodity markets. A brief look at the CRB Index shows we may not have seen a bottom in the commodity markets as yet despite the long downtrend underway for the last two or more years. There is scope for further price and time correction in most of them, including crude.

Wave counts suggest we may be in the middle of the last rally up in the US markets before an intermediate correction sets in. For that view to be negated, we will need new tops in this rally that are five per cent or more higher than previous tops. Considering the mature bull markets we are in, that may be unlikely. Hence those playing longs should keep tight stop losses and look to exit.

Back home, the $-INR dominates news flow. For the immediate term the worst may be over in terms of rupee depreciation but yearend values are likely to be nearer 65 than 60. Expect Indian equities to rally to 6300 and then correct along with the rest of the world equity markets. 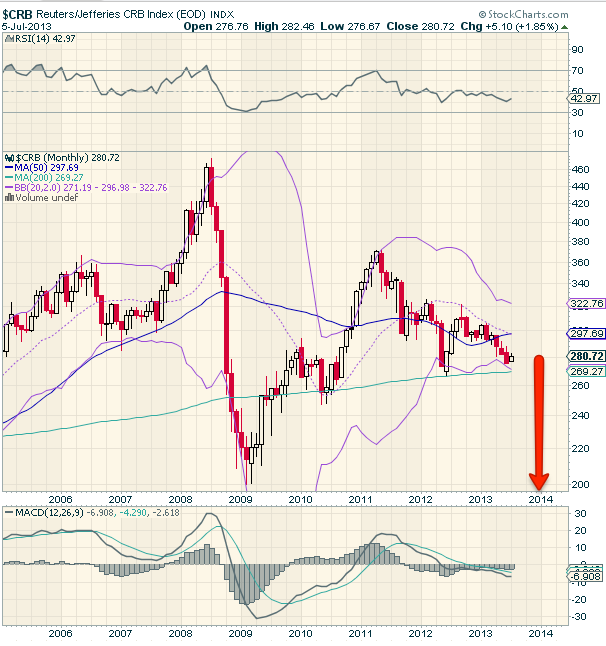 CRB Index [Commodities]: The Reuters/Jefferies CRB Index closed the week at 280.72. The monthly bar chart alongside shows commodities could correct a lot more from current levels before we get to a bottom. The chart is presented just to give a perspective to the ongoing correction in commodities. Not all commodities in the Index will correct at the same time. But clearly, it is too early to call a bottom in commodities as some have been suggesting. 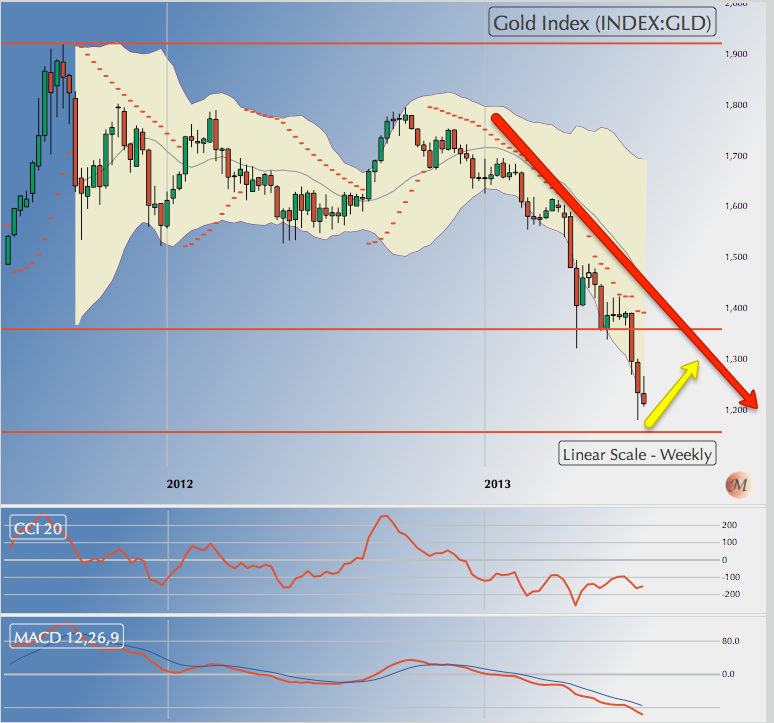 Clearly, the long-term bearish trend in gold is not over and we could see multiple attempts to take out the 1160 support going forward. We may not see a robust counter-trend rally in gold until early next year. Silver: Silver closed the week at $18.81.  What is noteworthy is that silver made a new low of $18.19 and rallied up to retest the $20 as the new overhead resistance and then fell from there to close at 18.61.  Expect silver to take out the $18 mark next week. As noted earlier, there isn't any appreciable support for silver below $20 all the way to $14. A gold like collapse in silver prices appears likely on the charts. 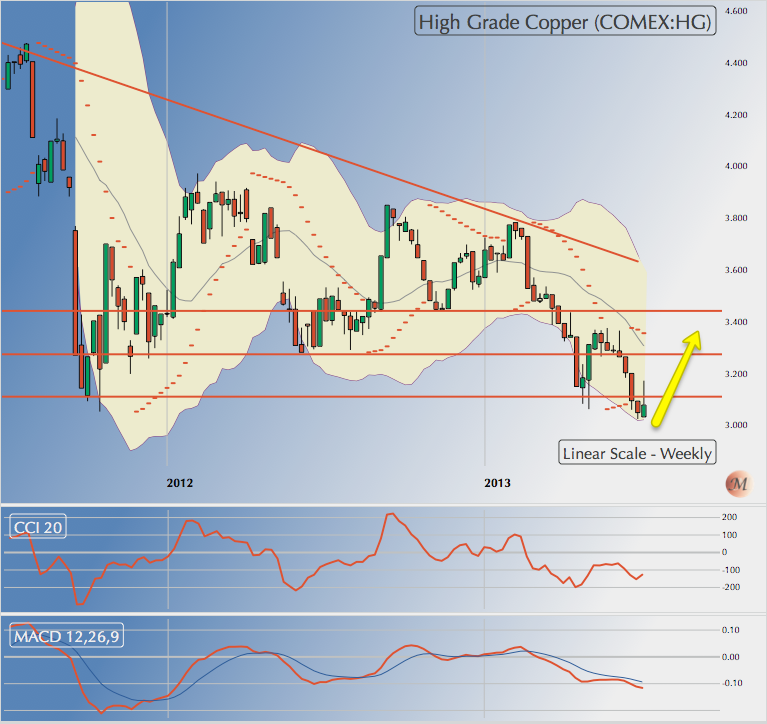 HG Copper: Copper closed the week at 3.065 after having rallied up to 3.1745 from its recent low of 3.0725. There is nothing on the charts to suggest that the downtrend in copper is over. The metal appears headed to retest its long-term uptrend support in the region of 2.50. A breach of the crucial support at 3.0 would confirm this prognosis. On the other hand, a short counter-trend rally to 3.40 can't be ruled out altogether. The odds favour a breach of support at 3.0. 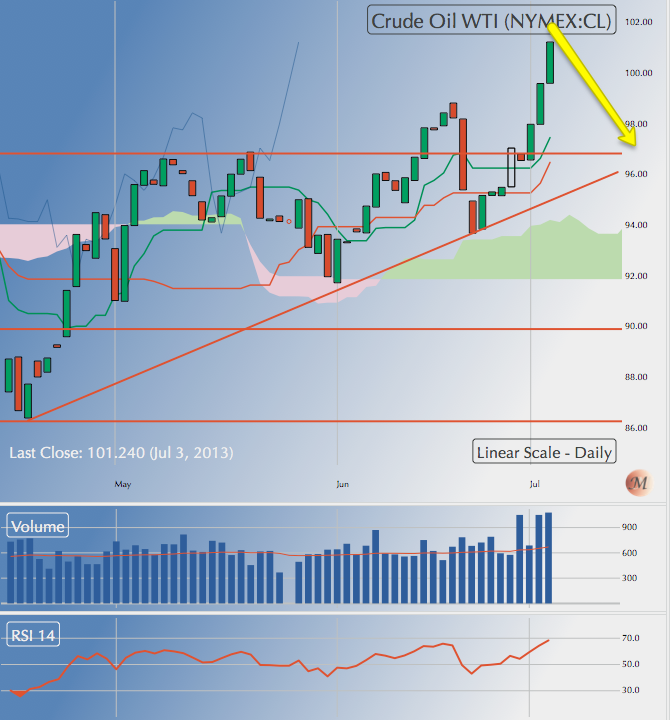 WTI Crude:  WTI crude closed the week $103.22. First overhead resistance from current levels lies at $106.50. It is highly unlikely that crude will take out this resistance in the current rally. On the contrary, crude is more likely to cool off and head down to retest support at $98.50.  Crude is over-bought. It has never strayed this far out from its 200 DMA in recent years. First support below $98 lies at $96. 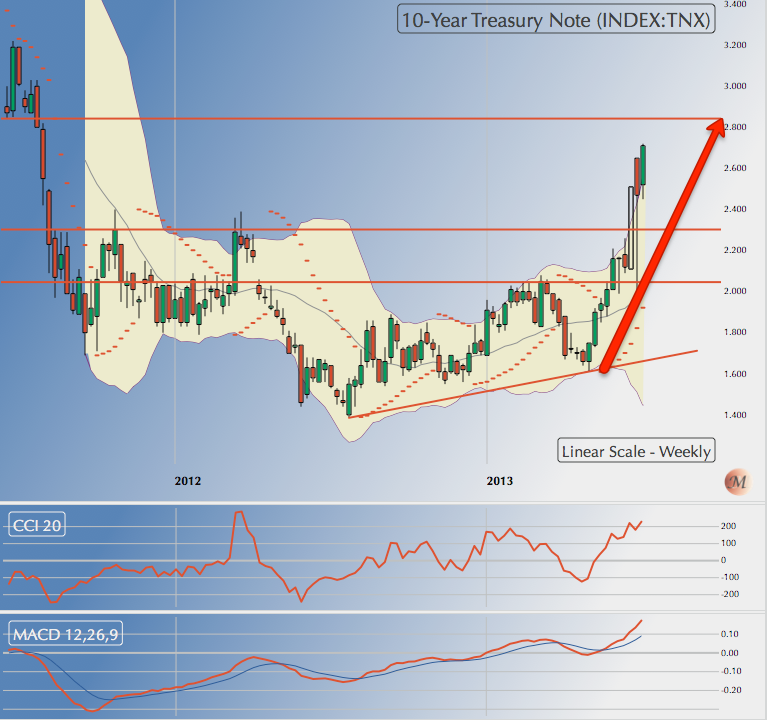 Yield on 10 Year USTs: The bond markets were back in turmoil after a short respite.  The yield on 10-year Notes flared up to 274 basis points roiling commodities and bonds. The weekly chart of yields alongside indicates that the markets want to test the yields right up to 285 basis points which is the first major overhead resistance. Markets do overshoot and a yield as high as 300 bps may be on the cards in the next few weeks. The almost one-way rally in yields from 160 bps to 300 bps signals a tectonic shift in the interest rate cycle whose full effect is yet to ripple through all asset classes. There is no guarantee that yields will peak out at 300 bps for now. 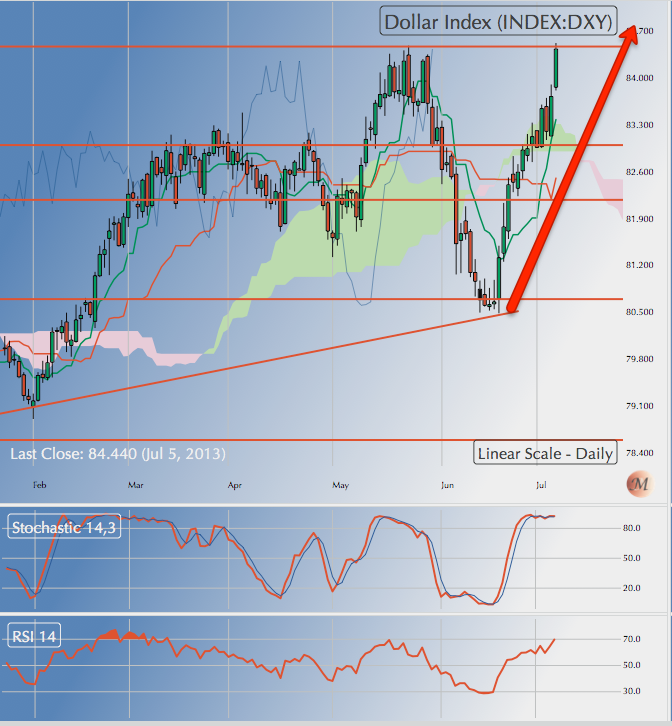 US Dollar [DXY]: The DXY is clearly over-bought and at a significant overhead resistance, having closed the week at 84.6890. DXY has another major resistance at 85 and may pause there to consolidate a bit. However, the uptrend is unlikely to halt there. DXY is in the initial stages of a Wave V up whose target could be in the 89 region. 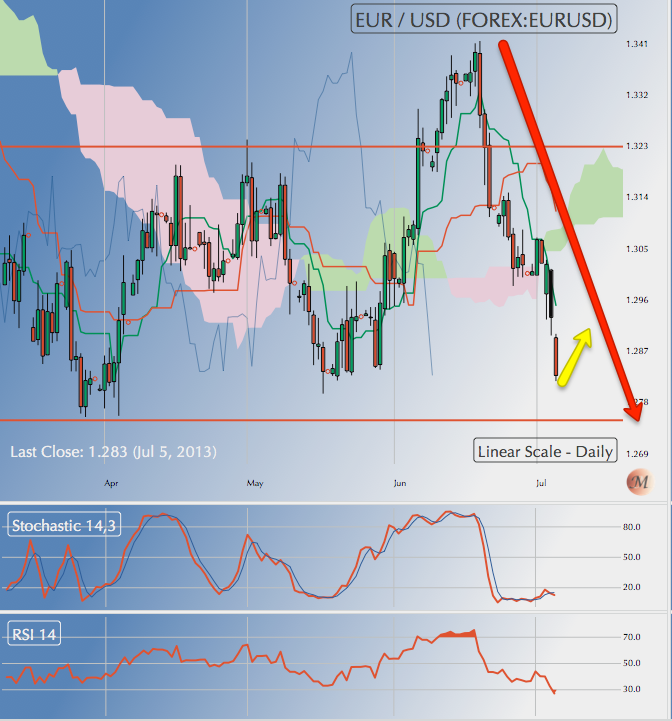 EURUSD: With the dollar in such a strong uptrend that other currencies are tanking, and the euro is no exception. EurUsd closed the week at 1.2830 slicking through the rally’s trend line support at 1.30. With this the euro has clearly signalled its intention of testing 1.27 support. In fact, EurUsd could head to as low as 1.24 after a brief counter-trend rally from 1.27 early next week. 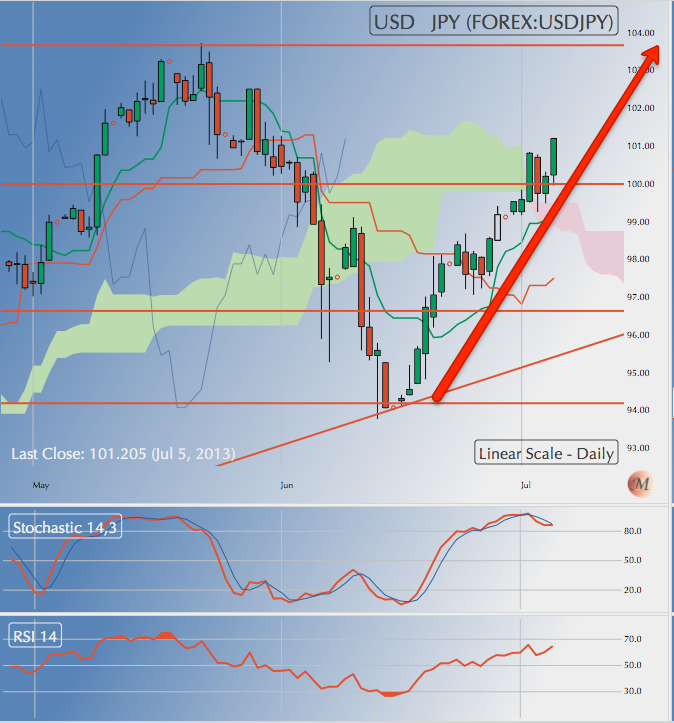 USDJPY: The UsdJpy chart is a mirror image of the DXY chart. As mentioned last week the dollar is headed to 103/104 yen and is likely to trace out a cup-and-handle from the previous top at 103. The absence of any meaningful correction to the rally from 94 indicates much turbulence ahead for the UsdJpy pair as it gets caught between a resurgent dollar and Abenomics. I would not be surprised if the 103/104 yen level is breached. 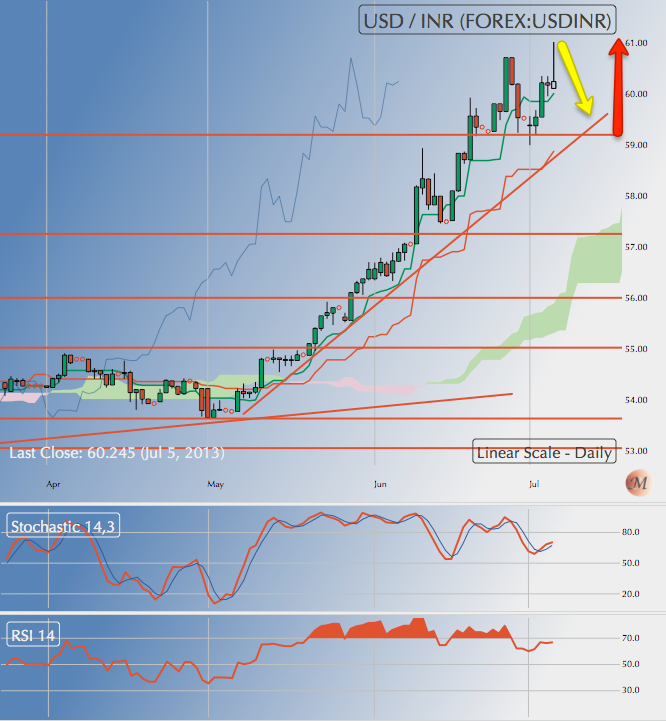 USDINR: INR has many a reason to seek lower levels against the dollar. India allows investment inflows to mask the true INR value as determined by trade flows which is rank bad practice over the long-term.  The RBI needs to seriously rethink the myths its has been perpetuating. Worth reminding the RBI that [a] in terms of “value added in India” our software and services exports of $50 billion a year as the equivalent of about a trillion dollars worth of merchant exports from China.  This value created in India and paid for in dollars is what drives growth in domestic consumption. Playing with these exports is more ruinous for India than anything else; and [b] Philippines has the fastest growing GDP and services exports in the world thanks to the RBI’s wrong-headed exchange rate policies in the past. You just cannot allow the competitiveness of services exports to deteriorate without tanking the domestic economy.  Furthermore, the RBI must look to the weakest link in the export chain to determine INR value and not listen to industry leaders like TCS/Infy. The majors have a vested interest in eliminating domestic competition from small exporters and at the margin it is the weakest player that must remain competitive for India’s exports to grow. The RBI has been talking INR rates to the wrong people!

That said,  INR is clearly following trends in the value of dollar abroad. After a brief correction, the UsdInr pair closed the week at 60.215.  In terms of wave counts and time, the pair has much more scope to the upside. My sense is that the pair will follow the DXY as the latter trends higher. Maintain my estimate of 63.50 to 65 INR per dollar by end of this year. 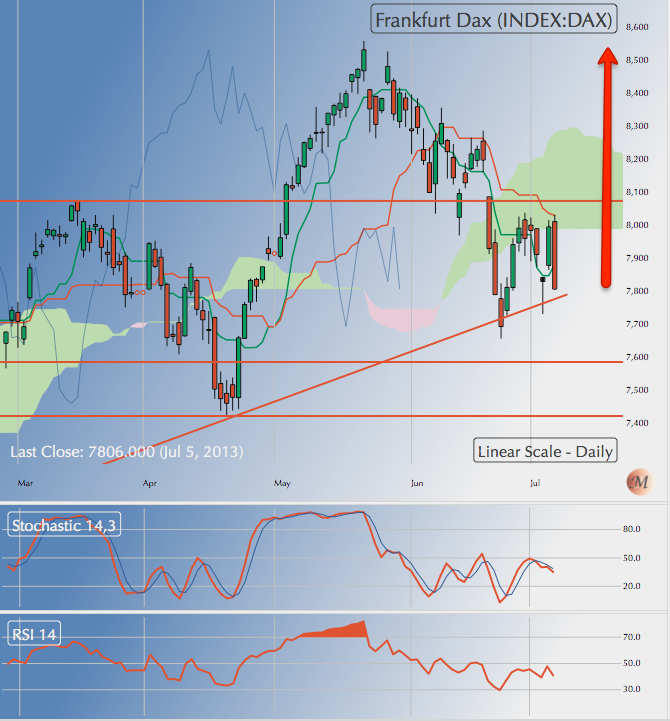 DAX: The DAX closed the week at 7806 after having retested its 200 DMA at 7700 during the week. With this, my sense is that the correction in the index from the top of 8557.86 has been completed and the index is likely to resume its uptrend back to the previous top early next week. Too early to say if we will see a new top. But a retest of 8560 is very much on the cards. 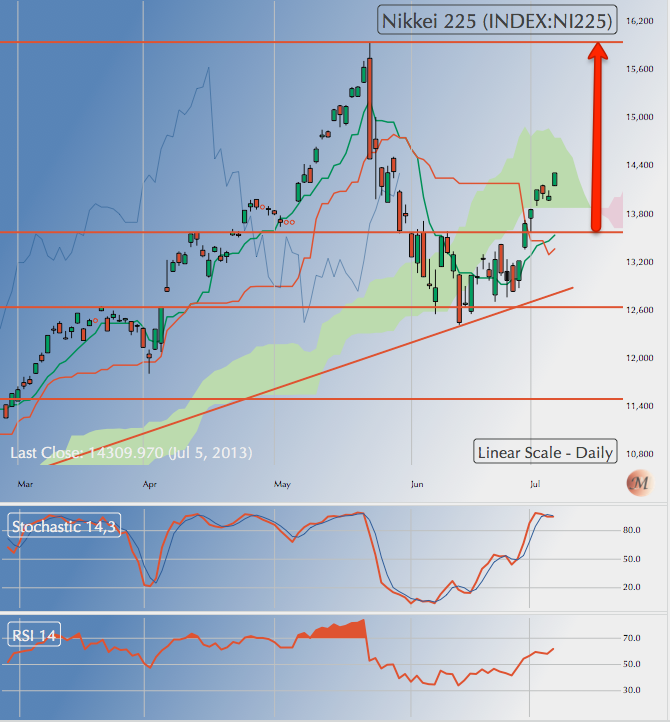 NIKKEI 225: The NIKKEI closed the week at 14309.97. First resistance from the current level lies at 16000 and the index appears headed there. Barring minor corrections on the way, there is nothing on the charts to stop NIKKEI from getting there. 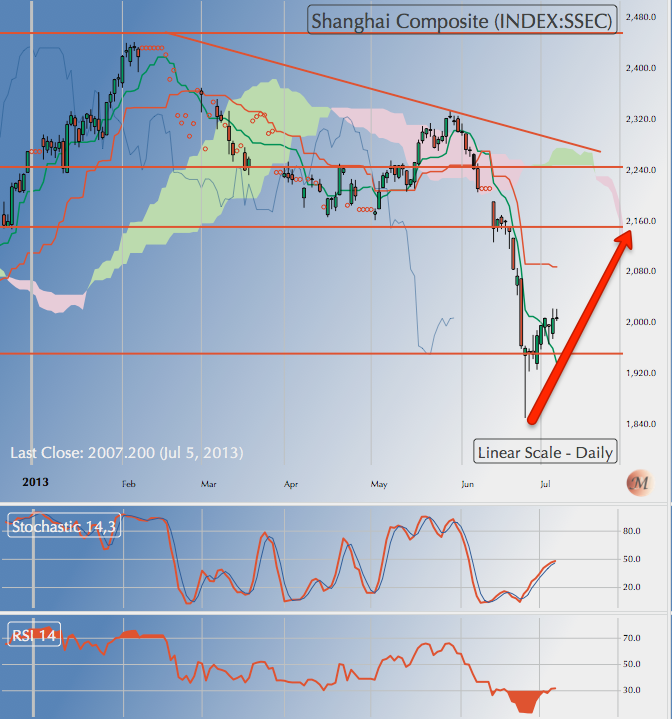 Shanghai: Having emphatically clarified that 1920 is not a true bottom, Shanghai has been in a counter-trend rally and closed the week at 2007.20. Shanghai appears headed towards 2240 region which is its 200 DMA. Shanghai’s counter-trend rally now underway could see it test 2450 before long. While the index hasn't bottomed out, the counter-trend rallies are likely to be as strong as the corrections that follow. Avoid shorts, play long. 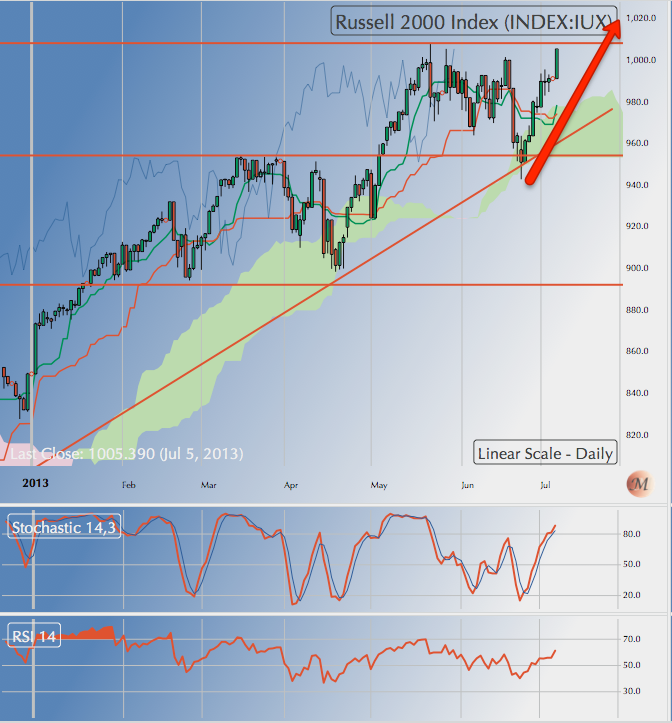 Russell 2000 [RUT]: RUT closed the week at 1005.39 just a bit short of its previous top of 1010. That the mid-cap space in the US is much stronger and in such fine fettle speaks for the direction  in which equities are likely to head from hereon. Note, SPX and DJIA present a comparatively weaker structure at this point which could be a bear trap.

NASDAQ 100: Nasdaq 100 closed the week at 2963.22, just atop its 50 DMA.  First overhead resistance lies at 3000 followed by the previous top at 3050.  While not as strong as RUT, the technical picture for Nasdaq 100 is much stronger than SPX or DJIA. Will we have a new high? Possible but unless we have a substantially higher new high its utility is moot. 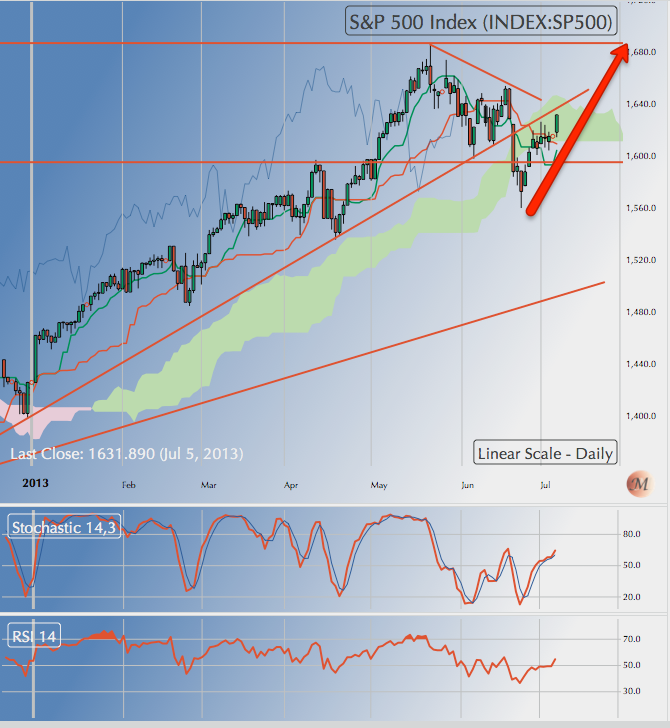 SPX:  SPX closed the week at 1631.89, just atop its 50 DMA at 1625. First resistance lies at 1655 followed by the previous top at 1687. A retest of the previous top at 1687 is almost certain. A new high can’t be ruled out. However, unless we get a substantially higher high [five pc or more], the current rally may be the last of them for a while.  Time for extreme caution in this rally. Keep tight stop losses. 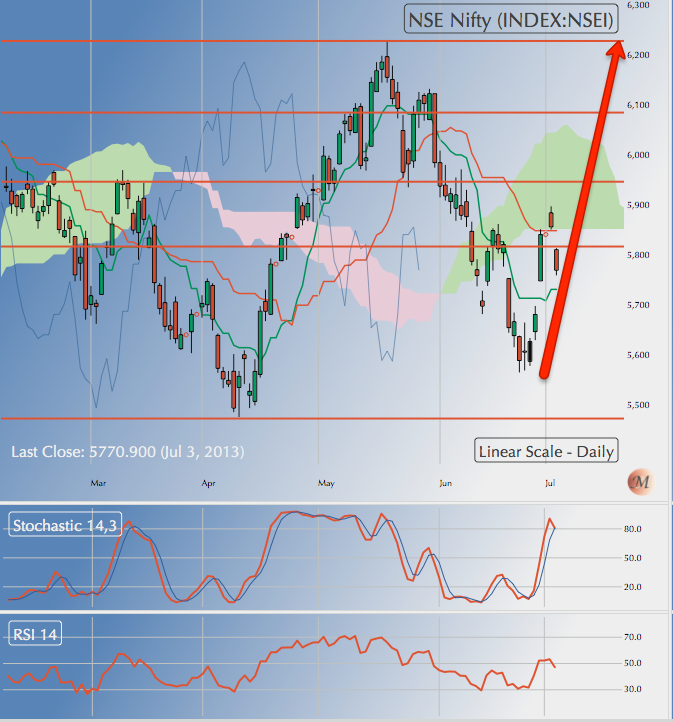 NSE NIFTY: The Nifty closed the week at 5867.90 after having tested support at 5750 during the week. The close was above the 200 DMA but below the 50 DMA which lies at 5925. Nifty is headed in a counter-trend rally to the previous top of 6250 and there is no logical reason not to expect a new top.  However, this is a counter-trend rally and even if we get a new top, it is unlikely to sustain for long. Nifty's rally to 6300 is tradable but keep in mind the reversal likely from 6300 along with the rest of the world's equity markets. 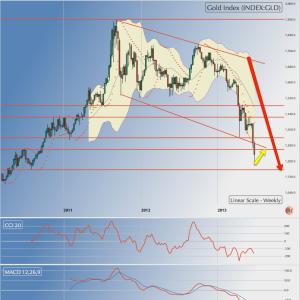 The upturn in the interest rate cycle cracks SPX and DAX