A few notifications is NOT reforms Mr PM!

For two decades while we continuously talked of infrastructure, power, ports, airports, irrigation, railways, roads, sewer systems, public transport, skill development, education, et all we also realised that our governments has very less vision to structure it, very little political will to carry it and far less managerial band-with to deliver such projects on time, writes M R Venkatesh.

I must confess that I was stumped by this tweet from my friend. It read "NRIs have been the bane of India." What was indeed intriguing is that this friend had a healthy regard for NRIs. In fact, for a few years he was himself an NRI and had returned home after an extended stint abroad. 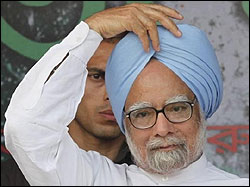 The second part of the tweet was a kicker. It read - we have been done in by Nehru, Rajiv and Indira - in short NRIs [s for Sonia?]. Believe me, this allegation, is more structural than personal.

It is not new either. For decades several political commentators of all hues have been consistently holding the view that the Nehru-Gandhi family is responsible for India underperforming on her potential.

Let me hasten to add that the issue is not about corruption that has bled the country by the billions if not trillions. Rather, it is all about the cumulative impact of Nehruvian economic thoughts - read socialism - on our approach to building the nation post independence. It may not be out of place to mention that Nehru was greatly influenced by Lenin and Stalin, dictators of Soviet Russia.

How much have Nehruvian thoughts cost the country? Posing that question in his provocatively titled article "The unimaginable trillions India lost to Nehruvian socialism," [http://www.niticentral.com/2012/09/the-unimaginable-trillions-india-lost-to-nehruvian-socialism.html] Atanu Dey does some smart calculation and tells us that the aggregate GDP of India for the period between 1950 to 2010 would be approximately USD 25 trillion at current prices.

Now posing a counterfactual scenario, Dey calculates that had we adopted an alternate set of economic policies that ensured an average economic growth rate of say 6 per cent for this period (in contrast to the actual 2.1 per cent achieved during this period), the aggregate GDP would have been a staggering $145 trillions.

Dey summarily concludes that "Nehruvian socialism" has cost us around $120 trillion so far. A staggering sum indeed considering the fact that the annual global GDP is approximately $60 trillion even as on date.

The interesting fact about economists is that they can endlessly argue with a "what if" scenario. Needlessly to emphasize a 7 per cent growth assumption since independence would throw a much higher potential loss as much as a 4 per cent assumption would result in a lower figure.

"The issue therefore is not hypothetical growth rates. Ask a wrong question and you would indeed be confronted with a wrong answer. The crucial issue in my considered opinion is - did Nehru err in adopting socialism post independence? The answer to such profound questions whose answers span across generations cannot be answered with a binary yes or no.

Economic policies not cast in stone

"The Commanding Heights: The Battle for the World Economy" a seminal work by Daniel Yergin and Joseph Stanislaw brilliantly captures the flow of economic thought in modern times beginning with the collapse of globalization in the early twentieth century coinciding with World War I, rise of communism, socialism and ultimately free markets.

Socialism, in their analysis seemed to be the dominant economic narrative in those heady times post World War II. In retrospect, it was natural that after a war of that magnitude which devastated entrepreneurship across continents, governments had to necessarily step in to boost investment, provide confidence and encourage consumption. Government interference was not by choice, it was the only possible idea then.

Countries considered as the free markets champions now like the US or Britain too adopted socialism. This was not ideological but strategically done with cold calculations behind it.

Yet one needs to understand that economic policies are not cast in stone. No wonder countries jettisoned socialism at the earliest available opportunity or when they found it to be unworkable. And when countries found that government occupying the commanding heights of their national economy was proving to be counter-productive, they did not hesitate to recalibrate their position.

But India? We endlessly debated (till the crisis stuck us in 1991) on what needed to be done by our Government, (including on how, where and when) while the rest of the world liberalised and became globally competitive. East Asian and Latin American countries are a classical case in point.

That is one part of the story. Those who critique Nehru should not forget that some of the educational, infrastructural and scientific institutions built by Nehru and "Nehruvian Socialism" have indeed stood the test of time.

Therefore to blame Nehruvian Socialism as a stumbling block to our attaining economic nirvana is a specious argument. Contrast this with the legacy of Dr Manmohan Singh, probably debated in 2050; you will understand what I mean.

The problem was not entirely with Nehru (as was the case with his daughter Indira and her son Rajiv) but that his thoughts continued to dominate decades after his death is the crux of the issue.

Let me elaborate. Health care in communist Cuba is indeed far better than most advanced countries. Health care is equally good in Canada - a country that has adopted market economics. As Deng Xiaoping said that he does not bother whether a cat is black or white as long as it catches the mice  implying what matters is deliverance, not ideology.

In contrast to such pragmatism displayed by global leaders, Nehru and his acolytes are guilty of being ideological fundamentalists. Importantly, the legacy of Nehru is that he left behind an intellectual ecosystem that has skewed understanding of India.

If government was to occupy the commanding heights of the national economy till 1991, post 1991 it was simplistically assumed by our economists that foreigners would come and build India. In the process the aam admi, at best was condemned to receive some doles [MNREGA for instance] from the government. This is how UPA views its role in national economy.

Naturally, when India faced an economic crisis in 1991 as it does now, these economists are unable to suggest alternatives except to increase in FDI limits.

More specifically, the central idea that drives our economic policy formulations (including the liberalization process) is that modern India cannot be build by Indians. This is the core of Nehruvian thinking. It is this thought that is the mother of all debates in India. If it were government officers then, it is supposed to be managers from MNCs now.

Little do we realise that a country of India's size and complexities cannot be built with foreign capital or even for that matter, technology. These can at best supplement, not replace, domestic initiatives.

Post socialism, does that explain why we sold the idea of foreign capital coming into our manufacturing to ourselves? Pray why only manufacturing? That was simply because Indian manufacturing was not considered world class and perhaps rightly so. And the solutions? Foreign capital and foreign technology!

When that did not materialise as anticipated we rationalised that China will be the factory of the world while we in India will be the global services provider. We are now told that we are inefficient in services too, especially in retail. And the solution? Once again foreign capital and foreign technology!

In all this, little do our economists factor the in-efficiency of our government that has defeated businesses - manufacturing or services, foreigner or domestic - within India? Where is the question of India emerging as an economic super power if businesses (foreign or domestic) are defeated at home?

Let us not forget that on ease of doing business index we are constantly slipping as we do on Human Development Index. On both counts it is government - not the private sector in India or for that matter definitely not MNCs - that will have to act forthwith and remedy the situation.

It is not that we do not know all this. For two decades while we continuously talked of infrastructure, power, ports, airports, irrigation, railways, roads, sewer systems, public transport, skill development, education, et all we also realised that our governments has very less vision to structure it, very little political will to carry it and far less managerial band-with to deliver such projects on time, within budgeted costs and assured quality. As a result, all these tall talks have translated to very little action.

Surely, when government delivers on infrastructure and acts as a facilitator for business, it shall be genuine reforms. To effectuate this, the government has to enact more laws, repeal existing ones as much as demolishing old infrastructure while creating new ones.

Since this requires demonstrable leadership, UPA under Singh seem to take a short cut - a few notifications here and a televised address there are supposed to be Reforms. How silly! In the process it has abdicated its responsibility on governance.

In short, Dr Singh, the economist, believes and wants us to believe that Japanese company manufacturing its products in China, imported into India and distributed through an American company is reforms!

May I ask him where is Aam Admi in all this? 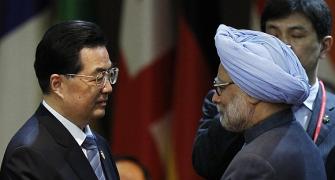 How India must deal with an ascendant China
Lost a towering pillar of our strategic community: PM

'Pathetic attempt' by PM to defend FDI in retail: BJP 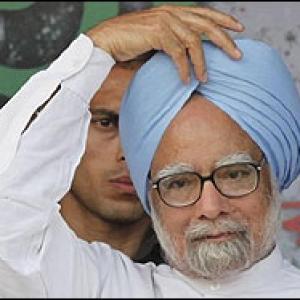 SPECIAL: A few notifications is NOT reforms Mr PM!