'Considering that an Internet company's market value is largely determined by its direct access to consumers for digital services, and largely served outside a sovereign country's control, it would appear reasonable in trade terms to discuss fees for a seat at the proverbial 'table' of opportunities in the largest open consumer market,' argues Venki Nishtala.
Image: Dominic Xavier/Rediff.com 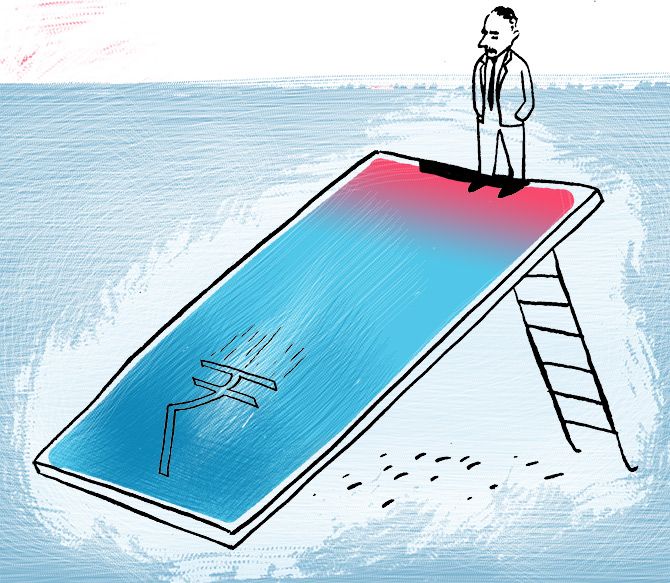 The news nowadays is that the current account deficit (CAD) coupled with high global oil prices seem to have reduced India's attraction as an investment destination.

In layman terms, the amount of dollars that India spends more than it earns or receives into the Reserve Bank of India's foreign currency (US dollar) reserves, is called the CAD. We need to maintain dollar reserves because the Indian rupee isn't allowed to be traded outside India.

One way to increase our dollar reserves is to export a lot more goods and services from India.

Over the past 25 years since the reforms, Indian IT services companies, through some great process innovations, have grown the market from nearly nothing to around 100 billion dollars a year. Similarly, the gems and jewellery industry contributes sizeably to our export earnings.

We also get huge remittances from Middle-Eastern countries, from Indian workers employed there repatriating and investing their savings in India.

All the three sectors also leverage the labour wage arbitrage which isn't sustainable.

The three sectors and the allied services of real estate, hospitality and services sectors have created a base of consumers in India with reasonable spending capacity.

The telecom reforms have added significantly to the growth of the economy and GDP.

Our ability to grow the economy is limited by the capital expenses that we can incur without increasing the fiscal deficit.

In other words, our revenues have to increase dramatically.

The tough measures of demonetisation to formalise and tax parallel economies and the streamlining of taxes through GST have laid bare the harsh truth -- that there is only so much one can squeeze from the current economy by way of taxes.

In the meantime, there have been unprecedented investments or deals in the e-commerce sector all with an eye on the future growth potential.

India is the largest of the emerging markets and with China discouraging foreign multinationals to benefit their own, the English-literate, if not speaking, Indian consumer market is a major draw with the hurdles of Foreign Direct Investments in retail e-commerce having been overcome through consumer acceptance and demand besides innovations of doing businesses with and in India through Indians.

The telecom companies, in contrast to the Internet businesses, were licensed entities at the outset, licensed by the government to operate with conditions of revenue share, to offset the revenue losses through privatisation of public sector industries.

No, taxes weren't enough, the government needed a share of the revenue.

To explain the industry and State-owned economy strategy, a large part of the banking sector which was private had been nationalised a couple of decades earlier, to allow the government reach the banking services to the masses.

The telecom industry, run by the department of telecom, was the biggest public sector failure saddled with huge costs and meagre revenues.

The government reformed the industry and outperformed itself, garnering valuable fees through licensing telecom companies and rationing valuable spectrum at premium through some very innovative regulations such as selectively auctioning spectrum needed for data services, now known as the 3G/broadband auctions.

The spectrum auctions provided barriers for less-capped entities to enter the market and, not surprisingly, led to consolidation where we now see only players with strong balance sheets surviving a low-ARPU market.

At a seminar a few years back, the Telecom Regulatory Authority of India asked whether OTT players, like WhatsApp and Skype, can threaten the telecom industry and their voice revenues. Many opined that the telecom industry earns revenue largely through voice and there is no market-failure situation to warrant intervention to protect telecom companies and license such OTT services or at least block them, as was demanded by the telecom industry.

There were niggling doubts whether the regulation was fair towards incumbents who paid huge license and spectrum fee. But given the degrading quality of mobile services and virtually non-existent broadband Internet, did not provide much support to incumbent telecom service providers' demand to reduce the fee of spectrum.

This writer opined at that conference that regulation was strangulating the telecom players and recommended measures to improve internet infrastructure -- laying of common optic fibre infrastructure in urban areas (not just gram panchayats) by the government, by extracting the value from BSNL and MTNL infrastructure through rights-of-way (ROW) already available to them, and thereby lower the operating costs for the telecom companies.

But, quite dramatically, it took just a couple of years for India to turn from a data-services deficient country to a market with largest mobile data consumption and also a big market for smartphones, with a huge upside for growth.

That was so because a large domestic investor with seemingly unlimited balance sheet leverage, created a brand new technology infrastructure a generation ahead of the incumbents.

Over the last few years, reduced oil prices, continued growth of services sectors and a majority government made India look very bullish to financial investors and multinationals looking for new markets for growth.

Such a mood emboldened the government to undertake some very bold reforms and focus on ease of doing business in India, even indulge in promoting usage of tools of multinational companies -- Twitter, WhatsApp etc.

Nothing seemed to derail the Indian economy until the oil prices went up 10% and the rupee depreciated 10% in a couple of weeks's time. But everyone recognises that we have reformed irrversibly and any import control measures might just be demonstrative in the short term, to show that the government is awake to challenges and isn't in denial any more.

So we have a free market economy, a capitalist's paradise, but some industries like the airlines and even the telecom sector face severe challenges with a weakened Indian rupee against the dollar.

Airlines need stable if not cheaper fuel costs and telecom companies have to continuously expand and upgrade infrastructure to meet consumer demand and stay competitive.

Unlike in the past, the services industries, IT, gems and jewellery, textiles, etc may not help us get extra foreign currency needed because each is faced with challenges of its own -- cloud services blunting the edge of IT services, smaller and highly competitive countries like Bangladesh, Philippines, Vietnam, Indonesia, etc competing for textiles, BPOs and the stagnant middle-east labour market.

Should our virtually free market economy also be opened for free?

But such arguments can mature only if economic and civil conditions sustain even in the near term, for the growth of the market.

So, should the participants in the market be asked to reimburse the sovereign a fee for participation?

Considering that an Internet company's market value is largely determined by its direct access to consumers for digital services, and largely served outside a sovereign country's control, it would appear reasonable in trade terms to discuss fees for a seat at the proverbial 'table' of opportunities in the largest open consumer market.

Consumers for a digital services business are as valuable as coal is for a power plant, as electromagnetic spectrum is for wireless telecom services, as right-of-way is for laying wired broadband infrastructure, each of which are well-accepted revenue sources for a government.

A parallel to the model is a local body government charging for hoardings or billboards used by advertisers -- higher the consumer density, higher the cost of billboards.

Interestingly, while I was researching if such an argument is plausible, I stumbled on a recent paper (external link) in the United States, which argues for a market access charge for trading in US dollars, to regulate appreciation of the US dollar.

Even a small access charge, it is argued, will help reduce the trade deficit of the United States with China.