Any debate on real issues facing the economy is always welcome. So we welcome Yashwant Sinha's concerns on the state of the economy.

Prime Minister Narendra D Modi has acknowledged that the first quarter GDP figures are a cause of concern. The economy has problems such as private investment, financial institutions' distress and employment. But we have to look at what the government is doing.

One can always have a contrarian view and get statistical data to back it up.

It is therefore not surprising that Mr Sinha chose the wrong figure of Rs +65,000 crore as input tax credit demand under GST, although the returns for input tax credit claims have not yet been filed.

These assumptions of tax credit demand are based on IGST figures alone and therefore wrong estimates.

Second, the negative impact of demonetisation was due to the initial liquidity crunch. With fresh currency in circulation by June-end 2017, this was a short-term pain.

Also, currency does not have shades of black and white. Black money is determined only on the basis of ownership.

This is a prerequisite for successful implementation of the goods and services tax. Once the benefits of GST, such as input tax credit and removal of the cascading effects of tax are implemented, consumer prices will come down.

With better tax compliance, the government can also lower indirect tax rates. This indication has already been given by the Union finance minister.

The complete online structure of the GST Network, after full implementation by December 2017, will bring ease of doing business, EODB.

Once initial transactions are uploaded into the system, other information will be transmitted automatically.

With online registration, returns, assessment and refunds without intervention by tax personnel, the day-to-day life of businessmen will become hassle-free.

Similarly, more and more processes, including e-tendering, are being done online through technological innovation. So, Mr Sinha's question of raid raj is limited to tracking black money and corruption cases.

For the first time the government has made a concerted bid to enhance manufacturing in India with EODB. The World Bank has recognised 20 economic reforms of the Modi government that will be considered in this year's international ranking.

It has helped attract foreign direct investment, which is now at an all-time high of $62 billion. This indicates faith in the future of the economy.

A major criticism of the previous UPA government was policy paralysis and lack of ownership of problems. The current government is active on all fronts.

Twenty such meetings of Pragati have led to a cumulative review of 183 projects with a total investment of Rs +8.79 lakh crore.

The UPA government compromised loans from public sector banks. The present government has inherited the NPA problem along with several macroeconomic destablising factors -- high inflation, a fiscal deficit of over 4.5 per cent of GDP and falling GDP growth.

The government is now identifying and resolving NPAs through Pragati, the Insolvency & Bankruptcy Code and the Benami Properties Act, which was passed 28 years back but was not notified.

India is among the world's fastest growing economies, the seventh largest economy by nominal GDP and the third largest by purchasing power parity (World Bank, 2015). But the benefits of this growth are unevenly distributed.

As per the Global Wealth Report, 2016, the top one per cent of our population has over 58 per cent of the total wealth of the country.

Large-scale corruption is the main cause of uneven growth. Curbing corruption and eliminating black money is a key mandate of the present government.

Mr Modi's initiatives to fight this menace include the setting up of a special investigation team; the Foreign Assets Declaration Scheme; renegotiation of bilateral treaties on double taxation avoidance agreements with Mauritius, Cyprus and Singapore; the Income Disclosure Scheme (IDS) I & II; the Benami Transactions (Prohibition) Amendment Act (2016); demonetisation; deregistration of shell companies and GST.

These efforts have helped establish a clean business environment.

The gloom is nowhere in sight, with healthy foreign exchange reserves, the current account and fiscal deficit under control, a strong rupee, healthy tax collections boosting government revenue, corruption and crony capitalism under check, a leak-proof and targeted delivery mechanism for financial participation and a proactive government committed to structural reforms.

Mr Modi may be criticised for squeezing too many reforms into a small time span. He believes in accountability, has created a performance matrix, and is setting tough targets.

He was voted to office to change the status quo and create a new normal. That is what his government is doing. 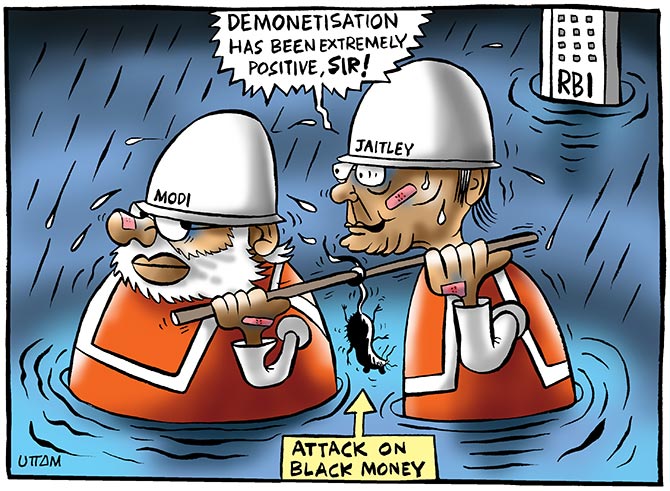