We can only solve the inequality and growth problems if we allow the private sector a sense of security that will permit them to mobilise investment.
And for that the private sector must be a partner of the Revenue, not an enemy.
Until then, India will continue to slide, under Modi, further back towards the dark days of the 1970s, says Mihir S Sharma.

The tragic passing away of V G Siddhartha, the founder of the Cafe Coffee Day empire - and a lot else besides - has led to much discussion on whether India and the Indian state is growing less friendly to entrepreneurs, industrialists and business.

Siddhartha mentioned, in what appears to be a note he left behind, that he was facing harassment from the income tax authorities.

The I-T office has strongly denied this, but this is not being generally believed.

Many see their decision to block Siddhartha’s access to his Mindtree shares at a time he needed to sell them as targeted harassment.

But the concern being expressed today goes beyond the specifics of this case.

It feeds into a general fear that was born at the time of the government’s anti-black money rhetoric, which then blossomed into a draconian law.

In the last Union Budget, the finance minister announced that the super-rich would pay more in tax.

This is in general not a problem for many people.

But, again, the messaging around the tax increase - a return to the noises made by the Centre’s faux-socialists in the Indira Gandhi era - was disturbing.

Put that together with other measures in the Budget and since.

For example, companies now will be vulnerable to criminal prosecution if they fail to spend 2 per cent of their profits on corporate social responsibility.

How is a mandatory payment out of profits anything less than a tax?

And why is the government levying a tax on companies for the benefit of NGOs?

This is merely a way to direct more cash to the ideological affiliates of the ruling party, and to siphon away shareholder money to build up a Hindutva-vadi establishment in parallel to the state.

The Budget also included increased powers for some tax officials - men of the Customs, for example, are now given the power to detain individuals if they perceive a threat to the “interests of the Revenue”.

Some things have definitely gotten better over the past few years - there has been a concerted attempt to reduce the initial human-to-human interaction in the tax process for example.

But it is also true that there is a widespread sense that the government intends to wring business for every paisa it can.

High officials of the government and senior members of the ruling party have been complicit in creating that impression.

The simple truth is that India can ill afford this sort of atmosphere at the moment.

We are going through a years-long crisis of investment from which we have yet to recover.

Unless private investment increases, India will not return to the high-growth path that is necessary to create jobs and prosperity.

But private investment will not recover if you choose to scare away investors.

Do we want to create a system like China’s, where the government lives in fear of capital flight on a massive scale?

Already the government has extended criminal provisions of the black money law to include non-resident Indians, presumably because it feels that too many people are leaving the country and think they are doing so to evade prosecution.

This is a clear misdiagnosis of what is going on.

Even if individuals themselves are not leaving the country, they are seeking to diversify their interests and sources of income geographically.

Some years ago, the scion of a well-known business house - when I asked him about their future business strategy - said that all he was interested in was ensuring that a majority of the group income came from overseas.

This, he said, was purely a play to minimise political risk.

If Indians themselves are chary of investing in India for fear of harassment, why would any foreigners do so?

The government is so short of money - thanks to the failure of its implementation of the Goods and Services Tax - that it is both concealing the true state of the fisc and looking around for soft targets that it can bully for more money.

In India, business is always a soft target.

It feeds into a larger sentiment, that has been growing since the anti-corruption movement and that was kicked into high gear by demonetisation, that the rich have been protected for too long and that the Narendra Modi government will be able to kick them into shape.

Nobody can deny that India has a problem with inequality.

But it also has a problem with state arbitrariness and a lack of understanding of property and individual rights.

We can only solve the inequality and growth problems if we allow the private sector a sense of security that will permit them to mobilise investment.

Until then, India will continue to slide, under Modi, further back towards the dark days of the 1970s.

Much is made today about “the interest of the Revenue”.

But the true interests of revenue lies in growing the economy.

And for that the private sector must be a partner of the Revenue, not an enemy. 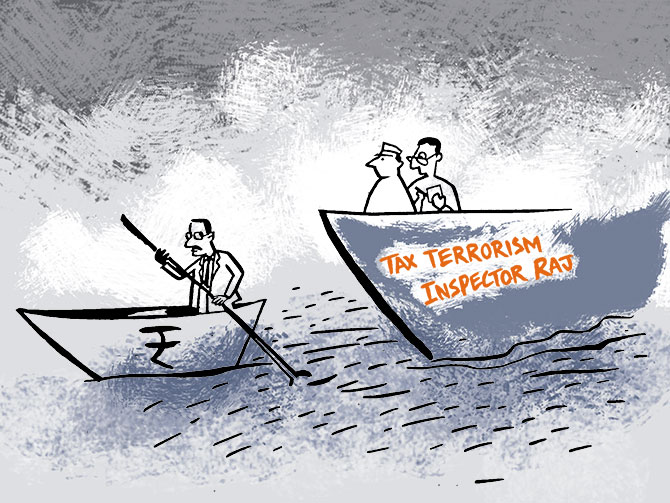