News
Business
Movies
Sports
Cricket
Get Ahead
Money Tips
Shopping
Sign in  |  Create a Rediffmail account
Rediff.com  » Business » How the 'pundits' got everything wrong

Whatever Mr Modi’s other shortcomings be, his consistent efforts to motivate have created an aura of positivity, hopefully stable.

He has also shown that he is not averse to taking decisions with possibly negative implications for him, says Shreekant Sambrani. 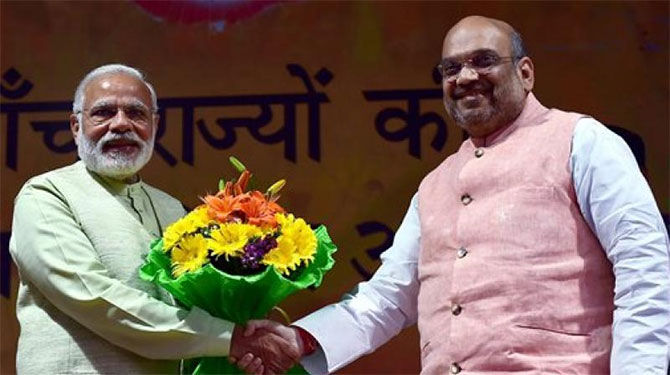 The clearest takeaway from these elections is the BJP’s dominance of Indian politics and in turn, that of Prime Minister Narendra Modi and party president Amit Shah. Photograph: PTI Photo.

No, this column is not about Rahul Gandhi, Akhilesh Yadav, Mayawati, the Badals, Arvind Kejriwal or Harish Rawat. Nor is it about some psephologists who could not predict the Bharatiya Janata Party landslide win in Uttar Pradesh and Uttarakhand.

It is about the professional commentariat. Most were incredulous when presented with exit poll findings on sundry television channels a couple of days before the long-drawn out suspense of the state assembly elections finally ended on Saturday.

They readily joined the chorus when the party faithful thundered, “Remember Bihar! Remember Delhi!” But some anchors had smartly pre-empted them by owning up those blunders in advance.

One cannot fault the parties and their leaders for being sceptical about the exit polls. They had fought long and arduous campaigns, unlike any prior in state elections. They could ill-afford to throw in the towel at the first signs of trouble.

The pundits had watched the scene equally long and claimed domain expertise on the basis of their earlier work. They were expected to offer better justification for their disbelief than saying that the projections did not square with their personal observations (possibly blinkered) or discussions with friends and associates (most likely supportive of with shared pre-judgements).

The clearest takeaway from these elections is the BJP’s dominance of Indian politics and, in turn, that of Prime Minister Narendra Modi and party president Amit Shah.

This will continue for some years, since there is no challenger in sight, if for no other reason.  While the Congress is on a dramatic, possibly terminal, decline, the BJP’s ascendance is indisputable, regardless of one's professed ideology.

The reasons for this are not hard to discern. For a decade, India suffered a regime led (nominally) by a mumbling prime minister and his bungling ministers. The result was a rapid transition from an aspirational to a despairing India, and its diminishment internationally.

Whatever Mr Modi’s other shortcomings be, his consistent efforts to motivate have created an aura of positivity, hopefully stable. He has also shown that he is not averse to taking decisions with possibly negative implications for him.

Those are the reasons for the ready, almost enthusiastic, acceptance of demonetisation. If it were a case of stoicism of the masses or schadenfreude, as some have tried to explain this enigma, surely there would have been some electoral cost.

This was not seen anywhere, from Gujarat to Manipur and from Punjab to Odisha, in recent state and local-body elections. The fact that the BJP has retained very nearly its entire 2014 tally of Uttar Pradesh assembly segments shows the extent of popular support for the measure.

That tells us that most commentators were at least premature, if not altogether mistaken, in their interpreting the crowds they saw waiting for cash after November 8 last as mass disapproval of note bandi.

Dr Manmohan Singh was uncharacteristically intemperate in his language in calling it “organised loot and legalised plunder”. His unsubstantiated assertion of a negative impact of at least 2 percentage points on GDP won him no converts and besmirched his reputation as an economics jagadguru.

P Chidambaram held forth from every available forum and claimed that remonetisation would take at least seven months. In a little over half that time, as of mid-March, over 80 per cent of the currency has been replaced and liquidity appears to be no problem any longer.

So the imminent collapse of the economy, much feared by many learned commentators, some of whom later spoke on elections as well, was a case of some exaggeration.

We must await revised GDP estimates later this quarter and the next to see if the same is the case of the awe and distrust that have accompanied the numbers released so far.

The point common to the scepticism expressed about exit polls and demonetisation is that these events presented scenarios beyond the ken of the commentators.

Their initial reaction of disbelief sprang from their inability to reconcile their past experience with seemingly unlikely outcomes of these unforeseen events. But that hardly inspires confidence in their capacities to display the spirit of rational enquiry and a mind open to entertain all possibilities.

Another example of this is the assertion of a liberal commentator adept at reading the writing on the wall to the effect that Uttar Pradesh had slipped back into identity politics from the earlier high of aspirational voting. The results show how little caste and community influenced the electoral outcome.

An entirely unplanned consequence of these election results is the sleeplessness they are causing in all probability to the present owner-occupant of one Matoshree bungalow in Bandra east, Mumbai.

On the reckoning of the trends of the last three weeks, it would be well nigh impossible to deny the BJP an outright majority and more if Maharashtra were to face a mid-term poll now.

The powers that be in the party might just be tempted to exercise that option as an effective answer to the continued needling from a recalcitrant “ally”! 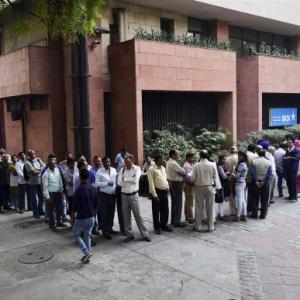