The use of RBI capital to strengthen public sector banks will have many positive implications for the economy -- and a few manageable downsides, points out R Jagannathan. 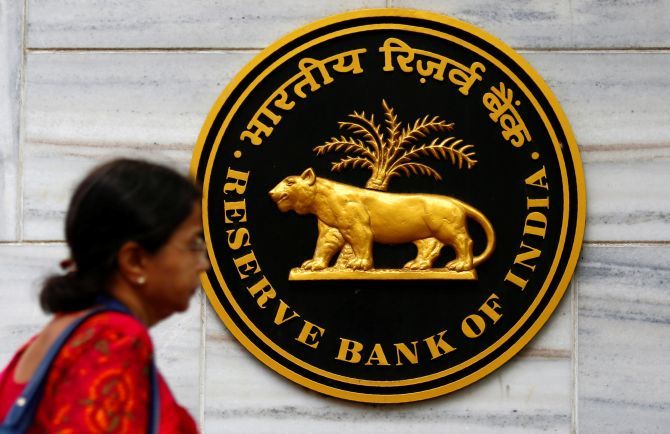 The former chief economic adviser to the government, Arvind Subramanian, has stuck to his guns and said the Reserve Bank of India has excess reserves to the tune of Rs 4 trillion to Rs 4.5 trillion, and some of it should be used to recapitalise banks, provided they are reformed.

In an interview to The Times of India, Dr Subramanian said: 'RBI should put the money only for recapitalisation of public sector banks, conditional on all the reforms being undertaken, otherwise it is money down the black hole. I started the excess reserve view a few years (ago). I am pretty confident that it is Rs 4-4.5 trillion.'

Dr Subramanian's caveat, that the RBI's capital should not be used to finance fiscal profligacy, is well taken.

What the RBI needs to think through before the next board meeting is this simple idea: What conditions should it seek to impose on the running of public sector banks while agreeing to return some of the reserves to government.

This is also what the joint government-RBI committee, to discuss the issue of excess reserves, will need to ponder.

The conditions for releasing capital to public sector banks could include the following:

The use of RBI capital to strengthen public sector banks will have many positive implications for the economy -- and a few manageable downsides.

Assuming, say, Rs 1 trillion of RBI capital has to be used to recapitalise public sector banks, it will actually make things better for the economy.

The bulk of the RBI's reserves (that is, extra capital) lie under two heads:

One is the currency and gold revaluation account (just under Rs 7 trillion), and the other is Rs 2.5 trillion in contingency and asset development funds.

A transfer of the RBI's capital to the government would have to happen through one of these two options, or both: One is the sale of dollars, and the other is the sale of gold.

Profits from these sales will be needed to reduce the reserves and show the proceeds in the P&L account for distribution to the government.

The implications will be the following.

One, the sale of dollars, or other foreign currency assets, will strengthen the rupee.

This will benefit importers, especially of oil, and holders of debt designated in foreign currency.

It will impact export earnings negatively, to some extent, especially the IT sector.

Two, the sale of dollars will negatively impact liquidity in the money market, since rupees will be bought through the sale.

It will necessitate liquidity enhancement measures, including possibly a reduction in the cash reserve ratio (CRR) of banks.

This will improve banks' profitability, as CRR is a non-interest bearing asset.

Three, the sale of gold may marginally weaken domestic prices of the metal, but it will bring immediate cash without any negative monetary impact.

Sale of gold in the domestic market will help reduce imports, thus helping the current account deficit (CAD) in some way.

Since yields of securities will fall when rates are cut, banks could see higher profits in their treasury portfolios.

With additional capital coming in from the RBI, banks will be able to begin lending more just when corporate profitability is improving.

It will strengthen the economic rebound.

Five, a fall in foreign currency reserves will likely create some concerns about the current account deficit and its financing, but this may be countered by higher dollar inflows into the markets.

Foreign investors tend to like currencies that are holding up well against the dollar.

Policies to woo capital will need to be agile in the initial phase of currency sales and capital return to the government.

Net-net, a return of capital from the RBI will be more positive than negative for the economy, especially if it helps turn the tide on credit growth and economic expansion. The only issue is negotiating the conditions the government needs to agree on reforming the public sector banks before accessing this capital.

By arrangement with Swarajya
R Jagannathan is editorial director, Swarajya