'The Modi government needs some big private sector trophies to affirm its anti-corruption credentials before the polls.'
'So on whose neck will the sword fall next?'
'To that extent, the outing of the ICICI Bank-Videocon story is cathartic,' says Shekhar Gupta. 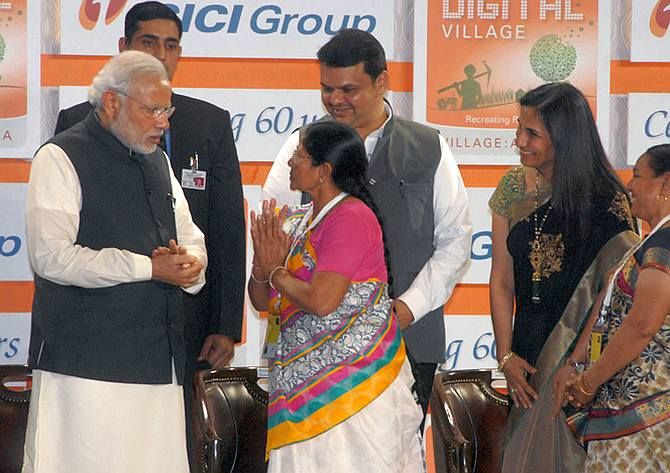 Delhi and Mumbai, we keep saying, are like two sovereign republics yet to establish diplomatic relations with each other. That situation hasn't changed very much.

The relative power of the two varies, depending on just one variable: The strength of the government in Delhi.

The cities, for clarity, are mere metaphors for the power establishments, one representing politics and the other legacy, old-economy Indian entrepreneurship and the financial world still pretty much controlled by a small ecosystem of friends and families, interconnected with marital, ethnic, caste (and sub-caste or clan) ties, plus IOUs.

This is like India's permanent capitalist and financial establishment. It doesn't change.

Regimes change in Delhi. Even if we take 1989 as the cut-off (when India's permanent single-party rule ended) Delhi now has its eighth prime minister.

The ruling parties or arrangements have swung between the deep secular Left -- H D Deve Gowda's Cabinet had two Communist Party of India ministers holding key positions, home and agriculture -- for the first and last time ever; and the unabashed Hindu Right, when the Bharatiya Janata Party won a full majority without even one Muslim or Christian MP elected.

Mumbai can usually find its way around any political establishment.

It knows the tactics and instruments.

It also has patience, helped along by the presumption that regimes in the capital change.

It doesn't, therefore, bother too much interfering in the 'internal affairs' of the other republic.

Legacy Corporate India decided it was time for a regime change and that they were capable of bringing it about.

There were three forces driving it.

First, some of the better entrepreneurs were fed up with the policy paralysis, and denial of environmental clearances or fuel linkages after they had borrowed billions and put plants on the ground.

They wanted a functional, pro-business government.

Second, and I say it with great care, where India's old capitalism comes from, there isn't much love lost for Muslims and never mind that 'My best friends are Muslim'.

So, can we now have a government that will be pro-business and also show the Muslims their place?

The third, and the most important factor, therefore, was that option was available.

Corporate India got more involved in 'Mission Modi' than at any time in national politics.

Mumbai thought it had found its man for Delhi.

It believed it succeeded and there were whoops of celebration. That ended quickly.

Four years on, it has now turned into suspicion and fear.

Mumbai is finally, and deeply, frightened of Delhi. Old-timers say the fear is like in the months of V P Singh's raid raj.

The fact, however, is that nobody has been raided yet. So what are they complaining about?

At one level, it is the frustration of jilted lovers. This isn't the government Narendra D Modi had promised us.

Nor is this the Narendra D Modi of Gujarat we had voted, rooted and contributed for.

An important and positive factor with the Modi government is that lobbying mostly doesn't work in Delhi anymore.

His isn't a government that believes it owes anybody anything.

Big business doesn't like it. They want him to be like he was in Gujarat, with open doors to them and a big heart.

But after coming to power, Modi has shifted his politics to where the votes are. And the businessmen don't count.

The tough fact is, never in our economic history, not at least since 1991, has big business been so powerless.

There is also a more complex side to this.

As a consequence of Modi resetting his politics as a champion of the poor and a corruption fighter, the taxman has been given unprecedented powers.

Tax terrorism of today, if you hear the same businessmen who contributed heavily to his campaign -- and are still putting money for him in electoral bonds -- is worse than anything they remember, they say.

Tax departments are being given targets to meet and much greater powers than before.

Almost everybody has a horror story, either his own, or something 'we all keep hearing'.

It isn't in the nature of corporate India to speak anything other than paeans of praise for any government.

A couple might just have whispered some criticism of demonetisation but were chastened by a slap on the wrist -- just a friendly phone call from Delhi.

This government, though, isn't mostly to blame for it, most debts turning bad were given or ever-greened in the United Progressive Alliance's time, especially in the go-go years of 2009-2012.

The rot in the system was known for at least three years, but left too late to be resolved.

Several things came in the way of timely resolution: First, the change at the top at the Reserve Bank of India, and then the shock of demonetisation before the new governor had settled down.

Barely had that debris been cleared when the goods and service tax was pushed through.

The system had not been prepared for any of these changes and therefore got fully consumed in dealing with these.

The bank bad-debt resolution was kept for the government's last year.

Today's stress and distress are a combination of all these factors: Of being dumped by the political establishment you thought was your own, tax terror and frozen credit.

This entrepreneurial fear and loss of morale are for real, and most inopportune when good corporates are seeing profits and demand rise.

Steel, in the dumps not long ago, is booming and so is cement.

The bankruptcy process of the first 'dirty dozen' is proceeding well and banks should see sizeable amounts coming back, especially from steel companies.

At the same time, 12 of the 21 public sector banks are so broke that the RBI is closely monitoring any lending by them.

One, IDBI, is now a basket case. And those that can lend are hesitant, for fear of visits by the Central Bureau of Investigation and the Enforcement Directorate long after they retire.

In this environment everybody is over-correcting, from banks to borrowers to the RBI.

The latest example is the circular the central bank issued in February debarring any restructuring except through the bankruptcy process after a set timeframe.

Nobody wants to take chances, least of all the RBI.

The silent new governor was never allowed (or chose not to allow himself) to build the stature for the job. The government is now trying to get this circular diluted.

As we noted earlier, none of them has been raided or prosecuted criminally yet. But, first Vijay Mallya and then the Nirav Modi-Mehul Choksi duo have given corporate India a foretaste of criminalisation of economic offences.

Phobias rise not from reality, but illusion.

The most popular current illusion is: The public sector banks are in a mess.

The Modi government also needs some big private sector trophies to affirm its anti-corruption credentials before the polls.

So on whose neck will the sword fall next?

To that extent, the outing of the ICICI Bank-Videocon story is cathartic. The whistleblower's 2016 letter had been floating on the power-WhatsApp circuit for weeks.

Many would feel relieved that it's out in the open now so all sides can have their say.

Phobias, as we said, are often not based on reality. But they can be a reality as this one is.