News
Business
Movies
Sports
Cricket
Get Ahead
Money Tips
Shopping
Sign in  |  Create a Rediffmail account
Rediff.com  » Business » Has Modi given up on the economy?

'The government has given up its focus on economic growth because it it not something Modi has been able to fully understand.'
'This explains the extraordinary focus on divisive politics by the BJP even at a time when the world's most important man in visiting India,' notes Aakar Patel.
Illustration: Uttam Ghosh/Rediff.com 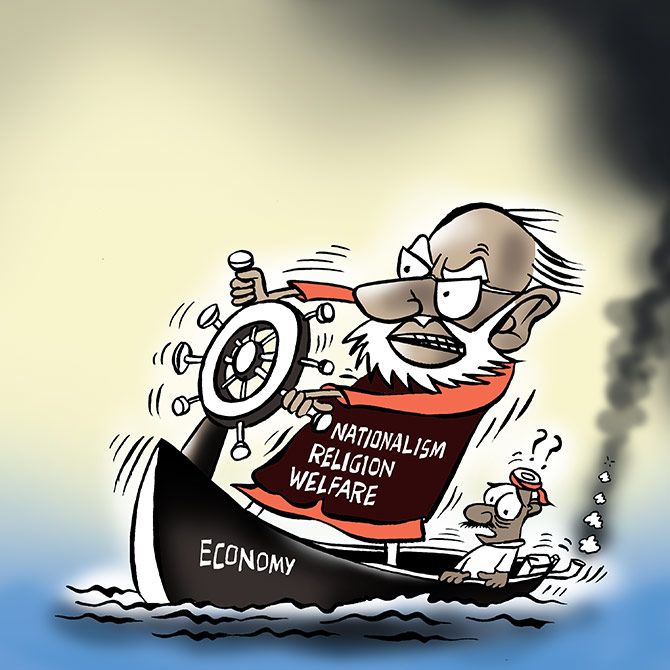 India's economic growth has slowed down further to 4.7% in the third quarter of the current financial year.

This is the slowest in six years.

The finance minister says this is not a poor number and is an indication of stability, meaning she is relieved that it hasn't got worse.

Her bureaucrats have assured the country that this is as bad as it gets, and have called it a 'bottoming out, meaning that growth will naturally escalate on its own from here on.

Unfortunately, this is not true.

This is not a bottoming out.

And this is even if we accept the government's figures, which many around the world are now sceptical of.

The government itself says that its full year growth for 2019-2020 will be 5% and that means that Sitharaman expects growth in the current quarter to slow further to 4.6%.

Outside of the formal sector, data has been difficult to collect credibly in India.

Further, the formal sector has been hammered over the last year.

It has had two consecutive quarters of negative growth in both sales and profit.

The Centre for the Monitoring of the Indian Economy says that corporate sales declined by 1.2% in the October-December 2019-20 quarter (having declined by 2.8% before that) and profits before tax shrunk by 10% (compared to a shrinkage of 60% in the previous quarter).

None of this is an indication of bottoming out and it would be stupid of the finance minister to herself believe what she is saying to cheer up the rest of us, that we will naturally start growing from here on.

Some of the other details that came out were that gross fixed capital formation, meaning investment, was minus 5.2% over the previous year.

It was minus 4.2% in the previous quarter to it is declined further.

The government expects that for the full year it will be negative meaning less money invested this year than the last.

Electricity production has shrunk and that is one of the best indicators that the economy is in deep trouble.

China's ministers have a similar problem of poor data (though better than India's, of course) to monitor economic growth.

To simplify this, one of the leaders Li Keqiang developed a respected method of assessing growth and it was merely to look at three easily reliable numbers: Railway cargo volume, bank loans and electricity consumption.

On all three, India is trending negative.

The manufacturing sector contracted again, which is astonishing given that the primary focus of economic growth by Narendra Damodardas Modi himself was his fancy Make In India scheme.

Not only is it not delivering, manufacturing as a percentage of our GDP is actually shrinking.

Unemployment is at 8% now and has been hovering around that figure for a long time.

The government has refused to release its own figures on this because they show that this is the worst performance on this front by any government in five decades.

There is further trouble down the line for the government.

It has refused to release the data it has already collected and now it also has a problem of collecting household data.

In Hyderabad earlier this month, enumerators from the National Sample Survey Office collecting data on how much families spend on domestic travel were confronted and stopped from working.

People are genuinely fearful of the linkages between the National Register of Citizens and this is the fault of Modi and Amit Anilchandra Shah for not having assured people.

The NSSO joint director in Hyderabad said she would not be able to deliver the survey to the government in the time frame given and it is possible that it may not be delivered at all, such is the atmosphere in the country today.

Without the data, the government will have no meaningful way of corrective action.

You can only do the right thing when you know what the wrong thing is.

The Modi government has put itself in the position where its ideological agenda on citizenship is now directly affecting its ability to tweak and take corrective measures on the economy.

The other truth is that the Indian government has given up its focus on economic growth because it it not something Modi has been able to fully understand.

This explains the extraordinary focus on divisive politics by the BJP even at a time when the world's most important man in visiting India.

The coverage across the world that we have received for the violence in Delhi is among the worst in decades.

Our reputation is mud and will need to be rebuilt.

And we have to do so in a period which is going to be turbulent.

Global trade has taken a hit this quarter with the coronavirus.

Stock exchanges across the world have been battered.

But several states, including incredibly BJP-controlled Bihar, have said they will reject Shah and Modi's NPR scheme.

The government will also face neighbourhood level agitations like in Hyderabad once the enumerators fan out, producing more turmoil.

India is in the worst position economically and socially it has been for a very long period.

I would say going back to 30 years ago when we had both the Babri movement and pre-liberalisation crisis happening at the same time.

And this time we do not have the leadership to be able to steer us through it. 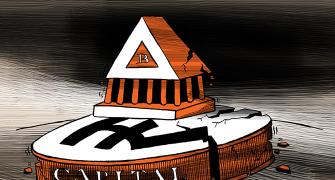