The structure of the rallies that unfold will determine if they make new highs or not, and there is scope for new highs, says Sonali Ranade

The big move underway in the markets is the reversal in the interest rate cycle after a bull market of 30 years in bonds. It has caught seasoned investors like PIMCO and Bill Gross on the wrong foot. This week we look at the yield on 5-year treasury notes that are poised at a critical level of 1.080 per cent.

A cyclical turn in the interest rate cycle is much like turning a giant super tanker. It is a process that takes time. There are reports of significant outflows from bond funds in the US. Rather difficult to say where this flood of money will head but a bit of it is sure to head towards equities and perhaps gold. Smart money will be looking at the falling commodity prices! [Remember I said it first!]. While commodities will undoubtedly correct a bit more, smart money will look to buy the lows for a counter-trend rally in commodities of the sort we see in gold.

The US dollar hasn’t finished its run-up and the price correction may be over. Expect a rally in DXY to finally precipitate the bottoms in commodities. The time-cycles point to a final denouement in mid-August.  The EurUsd  could surprise by rallying even as DXYrallies! Will the yen take that much of a fall to sustain a simultaneous rally in DXY and the euro? It’s happened before, though not for very long.

Equities have clearly finished their current corrections and are all set to resume their bids for new highs. The structure of the rallies that unfold will determine if they make new highs or not. There is scope for new highs. But recall my warning last week. The ensuing rally could be the last before we see an intermediate correction spanning months that could take 20 to 30 pc  off equity indices.

So tread and trade with extreme caution and tight creeping stop-loss limits. 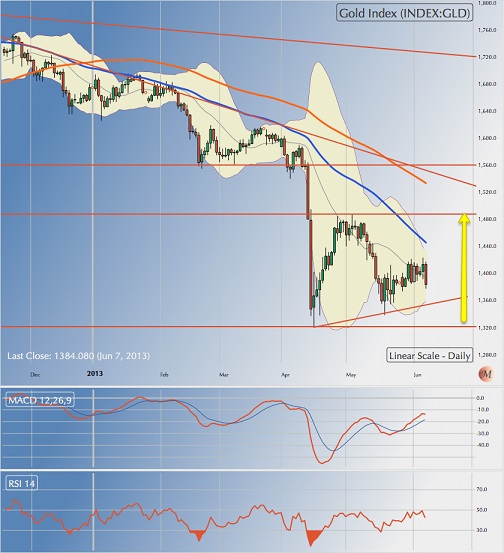 Gold: It continued its uptrend as expected, making a high of $1423.30 before closing the week at $1383. While there will be sharp corrections, the uptrend should continue for a target of about $1500 in the next six to eight weeks. However, long term gold continues to be very bearish. 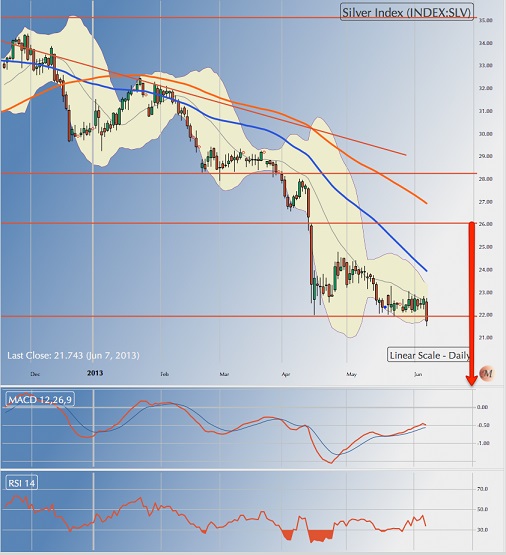 Silver: It closed below the $22 support for the first time after 2010 and confirms my view that the bottom in silver lies much below current levels. Silver closed at $21.64.  We are approaching a collapse in silver prices over the next two to four weeks. I would be surprised if the $20 floor held up in the next fall. 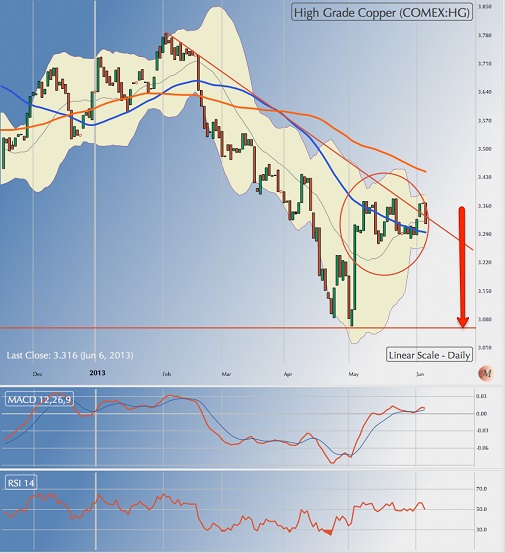 HG Copper: It closed the week at 3.2685, just below its 50 DMA. Copper could retest its floor at 3.00 over the next few weeks as all commodity markets correct in sync. 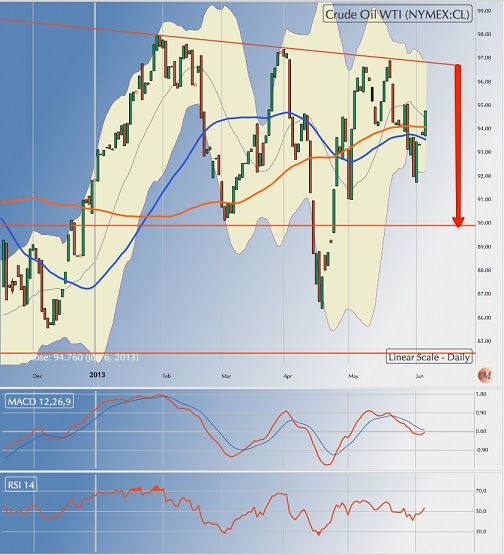 WTI Crude: It closed the week at $96.03 after making a low of $91.26 during the week. Crude appears to have bounced off its 200 DMA at $91.50 which would normally be considered bullish. But I think the reactive move up is deceptive and crude is more likely to fall than rise. Expect the fall towards $90 level to resume early next week.  Bearish. 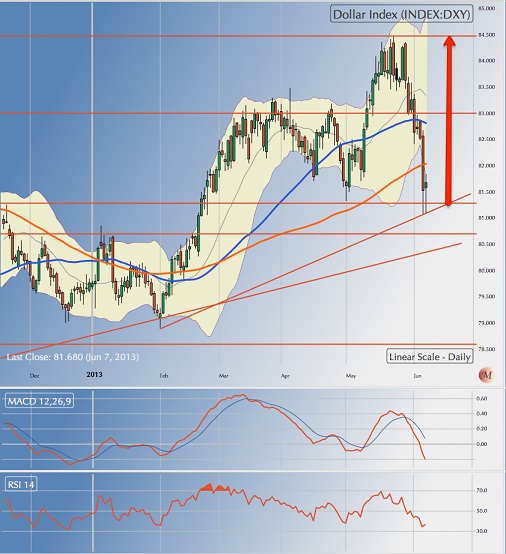 US Dollar Index: The DXY bounced off its support from 81, which is also its 200 DMA, to close the week at 81.66. Barring a few more sessions of sideways movement, the correction in DXY is complete and we could see a sharp move up towards 83 levels over the next week. Remain bullish on DXY for a target of 87/88 by October-end. 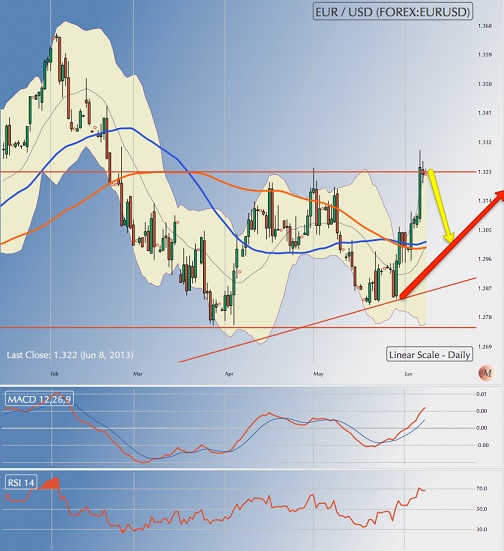 EURUSD: The EurUsd closed the week at 1.3220 after making a high of 1.3304 during the week. The movement confirms my view that EurUsd isin an intermediate [but reactive] uptrend to test 1.35 levels.  However, the movement will be jagged and marked by sharp corrections.  Expect the EurUsd to retest support at its 50/200 DMs in the 1.30 region before moving up again. 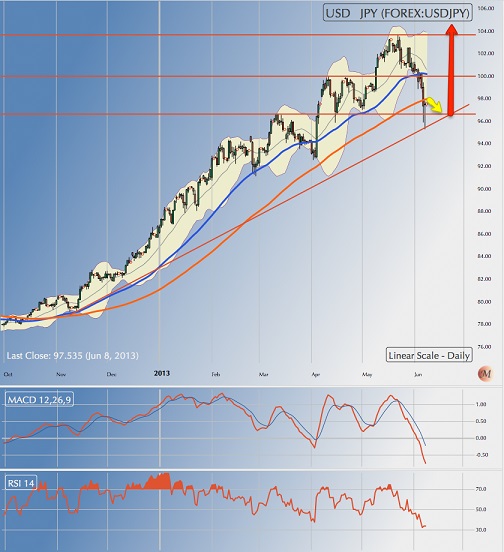 USDJPY: The UsdJpy closed the week at 97.53 after making a low of 95.02 yen during the week. The UsdJpy has strong support at 94 followed by more robust support at 91, which is also its 200 DMA. I don’t think the dollar rally in the yen market is over and we will see new highs. Expect some base building at 91/94 levels before the rally resumes. 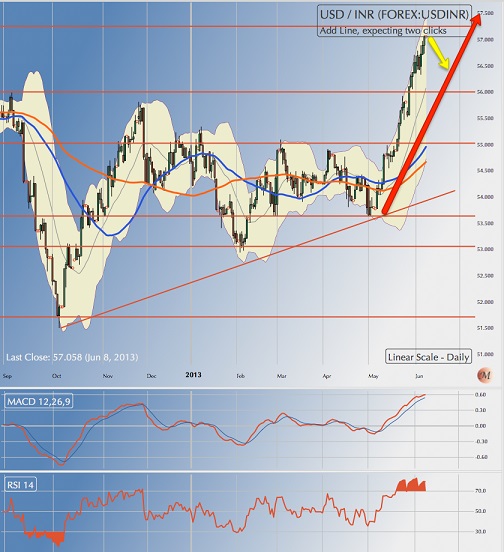 USDINR: The UsdInr finally disclosed its true intentions after much deception. It closed the week at 57.05. Much more deception lies ahead and I don’t think the INR 57.30 top will be taken out in a hurry.  Indeed, we must expect the dollar to build a base over 56 [possibly 55] before making a serious attempt to take out INR 57.30. 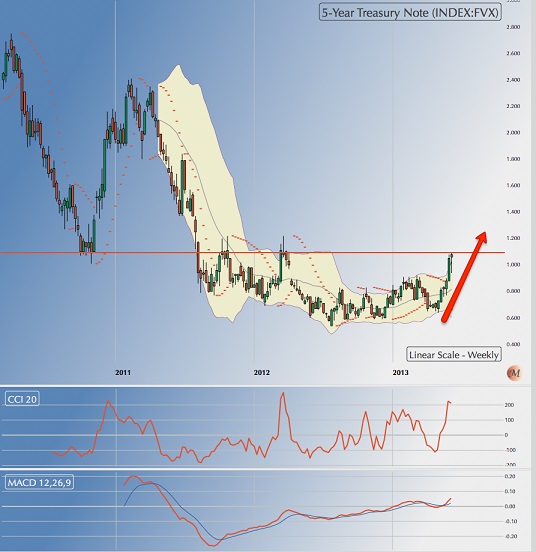 Yield on 5 year USTs: The US interest rate cycle continues to turn up across the maturity spectrum slowly but surely. The yield on 5-year treasury notes is poised at a critical resistance level of 1.085 pc. I expect the level to be pierced to the upside after a few days of consolidation just below the level.  The move will further accentuate the flight of money from the short end of the bond funds. Where the money will go remains moot! 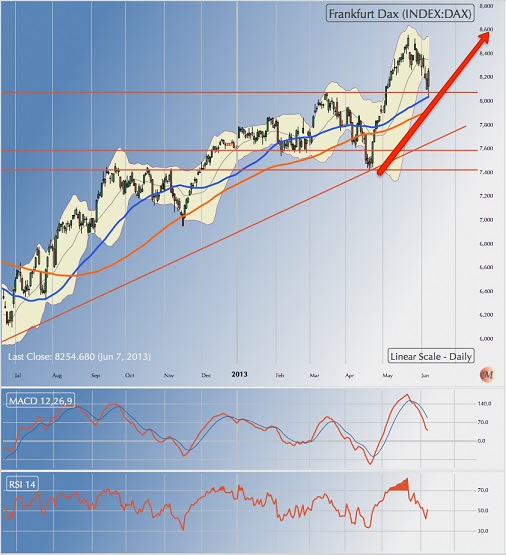 DAX: The DAX closed the week at 8254.68 after bouncing up its 50 DMA at 8040. With this bounce, the correction in DAX from the top of 8530 isessentially over. After a few days of sideways consolidation, expect the DAX to reach for the previous top. The nature and structure of the rally from here will tell us if DAX will make a new high. 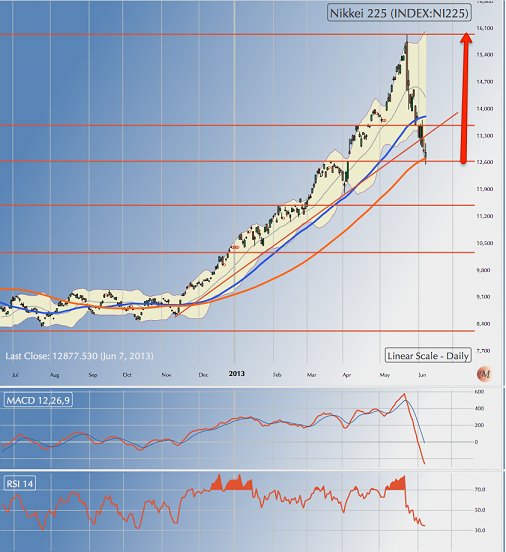 NEKKEI 225: The Nikkei closed the week at 12,887.53 after making a low of 12548.20, which was my anticipated support for this correction. With this the price correction in Nikkei is over barring a few days of sideways consolidation above 12600. We can expect Nikkei to resume its bid for a new top, 16000, after such consolidation. 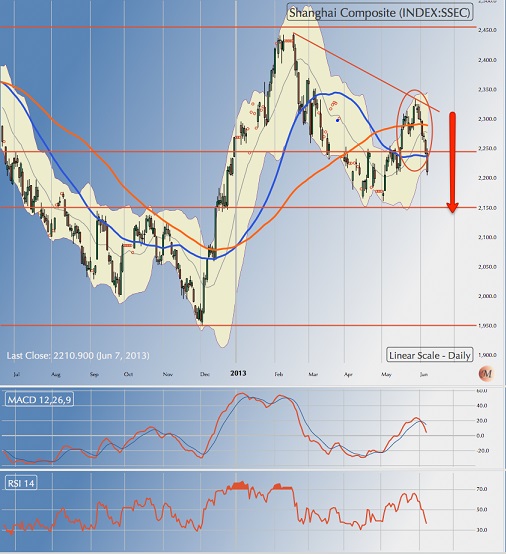 Shanghai Composite: As expected, Shanghai turned down last week and closed the week at 2210, well below its 200 and 50 DMAs. At the minimum, we can expect Shanghai to retest its first support, 2140, over the next week. Shanghai is in a critical region in terms of price and time. A price collapse and a new low are both possible over the next three to four weeks. Bearish. 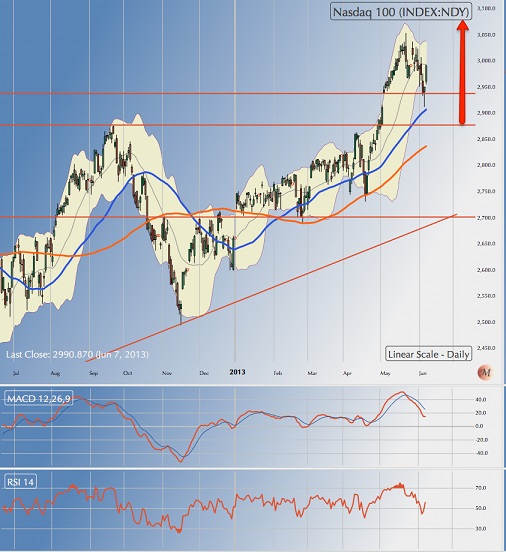 NASDAQ 100: The Nasdaq 100 closed the week at 2950.30 after bouncing off its 50 DMA at 2900. With this, the correction in Nasdaq from the top of  2999 is complete.  Expect the Nasdaq to resume its bid for a new high after a day or two of sideways consolidation. Whether we make a new high or not will depend on the structure of the next rally. 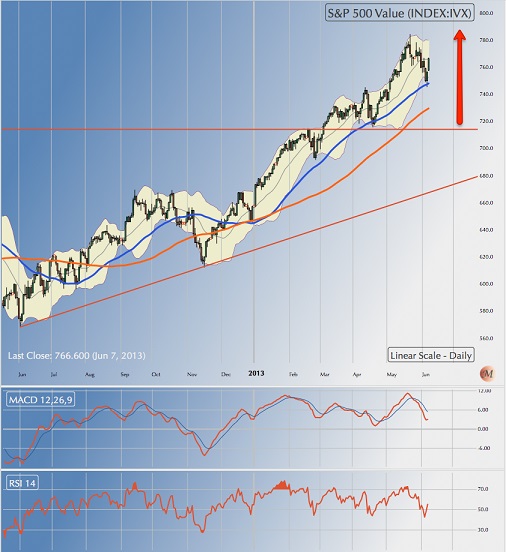 SPX: The SPX bounced smartly from its support at 1598, which is also its 50 DMA, to close the week at 1643.38. With this the correction from the top of 1687.18 is over and we can expect a determined bid for a new top from the SPX. I will stick my neck out and say that the SPX will likely make a new high by mid-August. A lot of things converge on that time-frame. 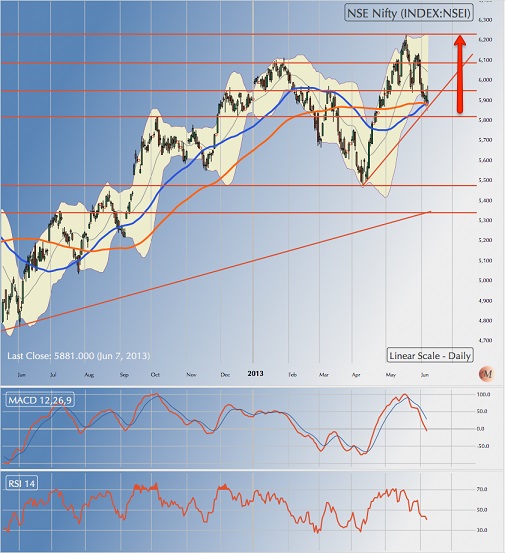 NSE NIFTY: The Nifty closed the week at 5881, just above its 50 DMA and close to the anticipated support for this correction at 5850. The Nifty could test 5800 early next week but is likely to rally towards 6300 after that. I would not be surprised to see 6300 pierced to the upside but not by very much. Mid-August deadline doesn’t exactly apply to Nifty but I would not bet on Nifty resisting the world equity trends long after that date. 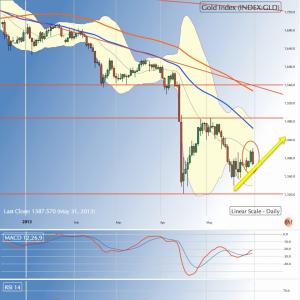 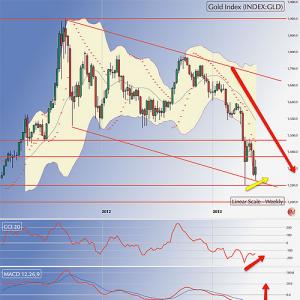