Now that the coronavirus induced economic mess has provided the occasion, opportunity and possibly time, too, the government should re-visit various industry-centric policies and identity those that are sustainable, whether as a ‘Make in India’ or a ‘Use in India’ project, says N Sathiya Moorthy. 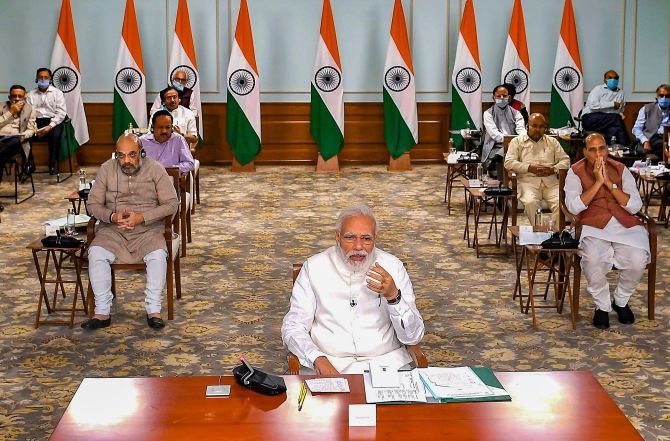 IMAGE: Prime Minister Narendra Modi interacts with floor leaders of the opposition and other parties in Parliament, to discuss the coronavirus pandemic and the government’s efforts to contain the fallout, via video conference, on April 8, 2020. Photograph: PTI Photo.

With all-round confusion prevailing over the government’s well-intentioned decision and the RBI’s directives for commercial banks to re-structure EMIs and interest, it may be time they consult the end users about what would help them over the short, medium and long-terms, when it comes to help absorb the coronavirus-driven economic and fiscal shocks, even if partially.

For one thing, the capital-intensive, low-profit airline industry may welcome it if the government declares that they need not pay the AAI rentals for parking their aircraft in the tarmac and hangars of various airports across the country. The government may have to consider even cutting down the price/duties of aviation fuel once the airliners become air-bound.

There may be other concessions this particular industry may want, which only they will be able to tell the government. However, yes, individual airlines may have different priorities, depending on the state and status of their own fiscal and economic health when it all got stalled.

Then, there is the media industry. As if taking it out on the media for their unstinted and at times abstruse backing for the government and leadership of Prime Minister Narendra Modi, Congress president Sonia Gandhi has suggested stopping government advertisements for two years.

On paper it may not be a bad idea, if and if only the industry had been doing well pre-coronavirus. That was not the case with any industry or any sector in the country, starting with the public sector and government’s own economic health.

Media insiders say that for two years in a row, the industry has been losing an average 15 per cent in ad revenue, before the virus struck. They heave a sigh of relief that the pandemic problem came in only towards the end of the financial year.

However, coming in the aftermath of an ‘un-sympathetic Budget’, they expect to lose another 15 per cent in fiscal 2019-20. They are unsure and unclear about what to expect in the current fiscal, which commenced formally in the midst of the coronavirus threat and nationwide shutdown.

Both these, for instance, are seen as high-profile, high-end industries. But they also employ a lot of skilled, semi-skilled and unskilled workforce, which goes beyond what is visible to the naked eye. For instance, the media industry is supported by ad agencies, and together they only reflect the health of the other sectors, which place those advertisements in newspapers and on television.

While other sectors seek and obtain fiscal concessions and credit at the instance of the government, the one way and possibly the only direct way for governments, both at the Centre and in the states, to help the media industry meet their half-way costs is through what is generally known as ‘government ads’. Needless to point out, governments pay a low tariff, compared to commercial, industry ads, even otherwise.

Yet, Sonia Gandhi may have a point. Once the coronavirus is behind the nation, and the government needs to look at sector-wise support for industries to stand up, it may have to draw up a more transparent and market-oriented pricing policy for government ads, and also market it with state governments.

At the end of the day, it all means that the media industry is like any other industry, with its inherent ups and downs when it comes to economies of scale. They are not there just to market the nation and ‘nationalism’ as their forebears did at the time of the freedom movement, and even later.

It is also no more of a brick-by-brick building up of readership loyalty and circulation without much reference to the economies of scale. Media industry, today, is not only competitive. It is even more capital-intensive, from the very word ‘go’.

But then, these are only two industries where the problems are beginning to become visible. The construction industry took a hit very long ago. Post-coronavirus and ahead of the US presidential polls later this year, there could be competitive campaigning for ‘Make in America’ adventurism. It could mean loss of more jobs for India and Indians, including on the home front, as the issue goes beyond H-1B visas and cover out-sourcing even in the much-coveted IT sector.

Now that media speculation is centred on the possibility of an extended curfew/shutdown/lockdown, it may be time that various departments of the governments, both at the Centre and the states, went back to doing their respective part of damage assessment and damage-control. They need to acknowledge that a lot of things went wrong with the management of the economy pre-coronavirus, and should not seek to push them all under the carpet.

Unless it happens, there is little or no chance that the economy could recover, sooner or later. There are visible issues inherited pre-coronavirus. One is what economists have called ‘structural issues’, which this government did not seek to address, leave alone possibly accept, either.

Sticking to Trump-ism and sacking economic advisors of the government is no healthy or healthy substitute for intention to fend off, then fight off the economic hiccups.

Truth be acknowledged even at this late hour, even the much-maligned bank NPAs were/are only a symptom of a deeper malice. The malice is a two-way street, but the government seems to be satisfied addressing only one of them. That is to fix responsibility and accountability for the absence of due diligence in the banking industry, unlike in the past.

The other issue is typical of the overall industry pattern of growth and development. The question, for instance, should have been: ‘Is the airliner industry as a whole all that sustainable as was being made out to be? How many airliners and aircraft and airports does India need, and more importantly, the Indian customer/consumer can support?’

That was/is a policy-decision that only the government could have taken, and should take at least at this late hour. Now that the economic mess has provided the occasion, opportunity and possibly time, too, the government should re-visit various industry-centric policies and identity those that are sustainable, whether as a ‘Make in India’ or a ‘Use in India’ project.

Even without it all, it was time the government revisited the nation’s economic direction, policies and programmes, from the day it shifted gears to usher in a market-centric ‘economic reforms’ agenda. Within five years of it all, Manmohan Singh, who piloted the entire scheme with a missionary zeal, admitted that what India needed was ‘reforms with a human face’.

Translated, it meant that the ruling party cannot push reforms without an eye on elections.

In the overall context, the Modi government should also reconsider the two-year cancellation of the MPLAD funds for parliamentarians. In times of crises like the present one, parliamentarians and state legislators may have links to local and localised issues on which the governments at the Centre and in the states cannot be expected to identify projects and provide funds.

Now that PM Modi has begun consulting with Opposition parties and state chief ministers, possibly for the first time in his six-year-long career as prime minister, maybe he should also consult economists and sociologists to give a new and all-acceptable spin to the nation’s economic policies and management.

Industry and sector-wise hiccups and coronavirus crisis apart, the nation needs the kind of consensus that held through the P V Narasimha Rao and Vajpayee regimes, but not afterwards. Incidentally, if there is enough money in middle-class Indian pockets to invest in stocks and shares that FIIs and FFIs fancy, maybe there is that much money available for the government to encourage the local industry to tap.

That kind of ‘protectionism’, not stopping with social media calls for all Indians to be ‘Be Indian, Buy Indian’, may hold the answer for the nation’s economic perils, over the medium and long-terms.

So what if the nation has to revisit the reforms process from a new perspective? After all, mid-term correctives are common and necessary. This has not been done in this case, going beyond addressing constituency interests, as Manmohan Singh’s UPA-I & II did, and the Modi dispensation followed up so very diligently and sincerely. 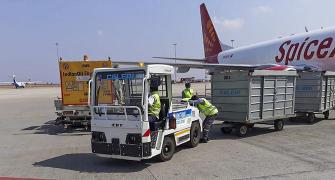