Will shale gas become a game-changer for India?

The UK shale gas 'pad allowance' would cut tax on production income by about half to 30 per cent, notes Kunal Bose. 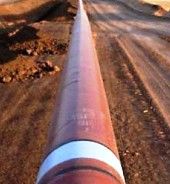 Experts across the world feel India, largely dependent on imports of oil and gas, is still not involved in fracking, another term for hydraulic fracturing of shale gas and tight oil.

Here, such a revolution would be kick-started only when the government comes out with a policy encouraging enough for private groups to put money in exploration and production.

So far, the US and Canada are two major success stories of the revolution.

Seeing the potential of shale gas, Reliance Industries moved early to secure a foothold in the Marcellus shale reserves in the US.

The venture has proved rewarding for Reliance, with gas prices in the US being market-determined. Reliance will, therefore, scale up its US shale business by investing about $5 billion in the next three years.

Now, encouraged by the two success stories across the Atlantic, the UK is set to join the fracking brigade; recently, the Treasury of that country proposed major tax incentives in this field.

The UK shale gas 'pad allowance' would cut tax on production income by about half to 30 per cent.

In doing this, the UK government must have been encouraged by the British Geological Survey's announcement that the Bowland shale gas resource beneath Lancashire and Yorkshire is at least 50 per cent more than the combined reserves of shale in Barnett and Marcellus, two of the largest fields in the US.

But, as is the case with India, the green community in the UK has risen in protest against shale gas extraction.

Drilling of wells for shale gas recovery could potentially have negative consequences on the local environment.

In the US, because of government assurances and breakthroughs in technologies allowing gas and tight oil recovery from shale without causing any significant disturbances to the environment, the new energy has become a booming business.

However, a few European countries such as France and Bulgaria, while sitting on significant shale gas reserves, have nothing to do with fracking.

He voices popular sentiment, not substantiated by facts, saying, “Gas prices in the US don't take into account the damage to the environment that would be a burden for future generations.”

But, taking a cue from their counterparts in the UK, a growing numbers of French businessmen are trying to convince their government the new energy source could be a catalyst to improve competitiveness in the country's economy, creating new jobs and reversing industrial decline.

According to the International Energy Agency, France and Poland have the greatest potential

for recoverable shale gas in Europe.

In a Polish village, locals are laying siege to a plot of land to stop energy major Chevron, which has the government's backing, from shale gas exploration.

In 2010, Chevron's seismic tests had led to water pollution in some wells.

Hopefully, a slip on the part of Chevron or the jaundiced views of some governments on pumping out shale gas wouldn't have prejudicial influences on New Delhi, as it writes a shale gas policy.

Equally importantly, local communities that would have to put up with fracking must not be given an environment protection guarantee alone; economic benefits are also important.

On the latter, India would do well to take a look at the UK government’s proposal that shale gas and oil drilling groups provide at least 100,000 pounds (Rs 97.5 lakh) for each fracked well, along with at least one per cent of the overall revenue.

All this money would be earmarked for local community welfare.

Earlier, Minister for Petroleum and Natural Gas Veerappa Moily had told Reuters the shale gas policy he was framing would be a ‘game changer’ for the country. Concerns of green activists could be mitigated by employing the right technologies.

There is no reason why India, the world's third-largest energy consumer, shouldn't move fast enough to reap the benefits of the most significant 'energy innovation' of recent times.

According to the US Energy Information Administration, in 2011, India's shale gas reserves stood at 63 trillion cubic feet (tcf).

Six basins -- Cambay in Gujarat, Assam-Arakan in the Northeast, Gondwana in central India, Krishna-Godavari onshore on the east coast, Cauvery onshore and the Indo-Gangetic basin -- are the most promising, in terms of recovering shale gas.

The National Geophysical Research Institute in Hyderabad has identified 28 sedimentary basins with shale gas resources several times more than the US agency estimate.

The point is as we have seen in the US through a decade and, recently, with the UK, the resources front keeps changing dramatically, with intensifying exploration.

Since 2011, the world's technically recoverable shale gas resources have risen from 6,622 tcf to 7,299 tcf and shale tight oil from 32 billion barrels to 345 billion barrels.

In India's search for energy security, shale gas must be given the importance it deserves.