News
Business
Movies
Sports
Cricket
Get Ahead
Money Tips
Shopping
Sign in  |  Create a Rediffmail account
Rediff.com  » Business » Why dollar will strenghten against the rupee 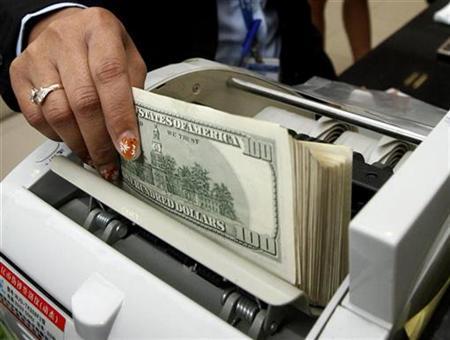 The reasons the dollar is up are structural - and it may underpin a revival of the India story, notes Akash Prakash.

The dollar has been strengthening for some time now. Since this rally began in July 2014, the dollar has strengthened against 32 of the 33 major currencies of the world, the sole exception being the Chinese yuan.

The worst affected currencies have been the rouble, the New Zealand dollar and the Brazilian real, all of which have weakened in excess of 10 per cent.

The rupee has been one of the most stable currencies in this period, down only about 2.5 per cent.

The stability of the rupee has been linked to India's improving macroeconomic outlook (a better current-account and fiscal position), to the credibility of the Reserve Bank of India, as well as to the relative calm in United States treasury markets.

Given the nature of portfolio flows into India so far this year, wherein debt flows at $20 billion have swamped equity inflows of $14 billion, the relative stability of the rupee is more dependent on calm in United States fixed-income markets than any dollar move.

Debt flows tend to be faster money than equity, and can vanish as quickly as they come in. Remember the taper tantrum of May-August 2013, in which the rupee fell by 30 per cent, peak to trough: it were debt outflows that caused the initial run on the rupee.

Equity flows were actually still positive in that period and non-disruptive. Policy makers need to keep a watch for any disruption in global fixed-income markets, which could spook debt investors, and cause money to flee emerging markets.

While there is now a general consensus that the dollar will continue to strengthen, what may surprise is the extent of the move and the reasons underpinning it.

As many research analysts, most notably at HSBC, have pointed out, past episodes of dollar strength have some common patterns:

•United States economic growth and its outlook tends to be far stronger than its major trading partners'.

•The outlook for monetary policy in the United States will be far tighter than its peers.

•Some type of global shock adds to the allure of the dollar.

•The dollar rally only falters when the United States current-account position becomes unsustainable.

If we look at the state of affairs today, then most of the above conditions are fulfilled.

There is no question that compared to the European Union (EU) and Japan, the growth outlook for the United States is far more robust.

Forecasters are upgrading their growth and employment numbers for the United States, while simultaneously reducing them for both the EU and Japan.

Even on monetary policy, while the United States Federal Reserve will have to begin raising rates in the coming six months, we are expecting some form of quantitative easing to commence in the other two regions.

A triple-dip recession in the EU and it's impact on the European financial system could be the economic shock that will catalyse a further surge in dollar strength. However, the biggest crisis facing most of the developed world today is the threat of deflation. Globally, inflation is currently above target in only eight of the 34 major economies of the world.

If we look at forecasts for 2015, only three countries out of these 34 are expected to have inflation above their respective central-bank targets.

In most of these countries, rates are already near zero, and, thus, will have limited impact in pushing inflation higher.

The only tool left to fight deflation is a falling currency. Currency weakness is being used as a tool to import inflation.

Given the relative economic strength of the United States, and the pervasive deflationary pressures almost everywhere else, it is the only currency against which others can depreciate.

No other country is willing or able to accept a stronger currency. China may be the exception, given its need to rebalance its economy, but its currency is not freely convertible and not yet accepted as an alternative to the dollar.

If the dollar is clearly going to strengthen, the next question is, by how much? As pointed out by HSBC, the average dollar rally has been about 20 per cent, and lasted for almost a year.

The rally would also typically fizzle out due to the United States current-account deficit widening to unsustainable levels.

Today, the United States current-account deficit has narrowed from over six per cent in 2008 to about two per cent and, given the shale revolution, looks unlikely to worsen in a hurry.

Any dollar appreciation will not be stopped by current-account woes. It is also a fact that the dollar itself has weakened about 20 per cent, after the commencement of the two bouts of quantitative easing.

Since the start of the current move, despite all the strong-dollar talk, the trade-weighted dollar has only strengthened by about five per cent.

If the typical 20 per cent move is any barometer, there is clearly a long way to go for the greenback. Unconstrained by current-account deficit issues, the dollar could easily overshoot.

If we are entering a period of a much stronger dollar, that has obvious implications for global commodities, emerging-market assets, and even Indian companies and their hedging policies.

A strong dollar has historically been bearish for both commodities and emerging-market assets, and both are likely to come under pressure.

India stands out as being a major beneficiary of weakening crude oil and other commodities, and this may further underpin the India bull story.

A gradual weakening of the rupee, entailed by a strengthening dollar, may also impact sectoral choices in equity portfolios.

Both software and pharma exporters', as well as other exporters', profitability and relative attractiveness will be enhanced in such a scenario.

Those Indian companies sitting on large piles of unhedged dollar debt need to quickly hedge and not be lulled by the stability of the rupee over the past few months.

There is no getting away from that. As long as the United States fixed-income markets are stable, we should see no undue pressure on the rupee; but weaken it will, if for no other reason but to maintain its relative value in trade-weighted real terms. The Reserve Bank of India may smoothen the fall, but it will not prevent it.