News
Business
Movies
Sports
Cricket
Get Ahead
Money Tips
Shopping
Sign in  |  Create a Rediffmail account
Rediff.com  » Business » The global economy - are we there yet?

The global economy - are we there yet?

It is a wonder how pervasive and long-lasting the damage can be from a balance-sheet crisis, says Suman Bery. 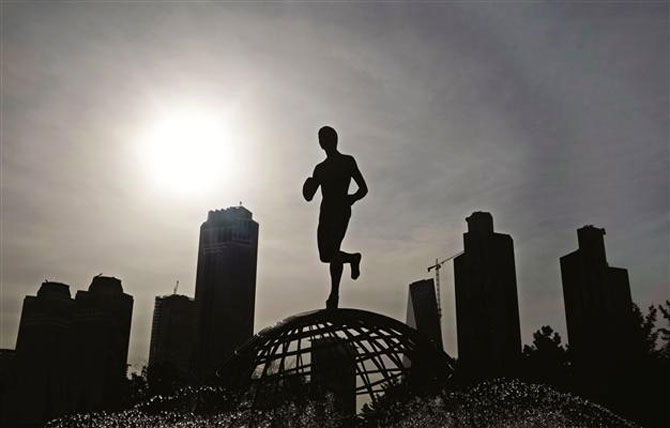 The semi-annual meetings of the IMF and the World Bank generate an outpouring of commentary on the status and prospects for the global economy. The flagship of this flotilla is the World Economic Outlook1 (WEO) published by the International Monetary Fund, but the major commercial and investment banks generate parallel commentaries as fodder for client events held on the sidelines of the meetings.

The Spring Fund-Bank meetings took place earlier this month, and what is striking the very different tone of the various assessments that were on offer. Commentators agreed on the major developments shaping the global near-term outlook.

These include a strengthening economy in the United States; a cyclical recovery and the launch of quantitative easing in the euro-zone; continued slowing of the Chinese economy; a lower dollar price of oil as compared to a year ago; and the sharp rise of the US dollar as measured both by the dollar index and against the euro.

Yet opinions diverged sharply on whether we should see the present juncture as evidence of a slowly healing global economy and financial system or as a patient barely kept alive on exceptional life support.

As noted, the most extensive and influential analysis is provided by the Fund. The IMF foresees a slightly stronger global economy in 2015 as compared to 2014, with weighted global growth at purchasing power parity (PPP) of 3.5 per cent. But as Olivier Blanchard, the IMF's Economic Counsellor notes in his foreword, this apparently flat outcome marks quite dramatic shift across countries and notably between the advanced economies and the emerging markets.

Big moves are forecast for the US, the euro-zone and Japan. The net outcome is that advanced country growth is expected to rise by a third between 2014 and 2015, from 1.8 per cent to 2.4 per cent.

By contrast, the bloc of emerging market and developing countries is projected to slow perceptibly, from 4.6 per cent in 2014 to 4.3 per cent in 2015. This primarily reflects a slowing China and continued difficulties in Brazil and Russia, offset by stronger growth in India and Asean.

As widely noted in the Indian press, an implication of these forecasts (if confirmed by the outcomes) is that Indian growth would exceed that of China. And as noted before in these columns at purchasing power parity India's economy is now the same size as that of Japan.

This indicates that the process of per capita income convergence continues despite the massive shock of the last seven years. This also lends an upward bias to future global growth, as the share of faster-growing poor countries rises in the aggregate.

These apparent positives notwithstanding, opinions are sharply divided on how to interpret the current juncture.

I would place the Fund at the bearish end of current opinion. This is partly conveyed by the title of the April 2015 WEO - 'Uneven Growth: Short- and Long-term Factors'. The missing element in the present recovery is fixed capital investment particularly in the advanced countries but also in the developing world, despite unprecedentedly low real interest rates globally.

The Fund attributes this low inclination to invest as reflecting a combination of surplus capacity generated during the last boom and diminished expectations of long-term growth in both advanced countries and emerging markets.

The Fund is by no means alone in taking this cautious view on the state of the global recovery. The highly respected economics commentator of the Financial Times, Martin Wolf, has also characterized the present state of the advanced economies as a "contained depression", where extraordinary measures by the major central banks have been needed to prevent recession from returning into depression.

On this view current growth rates are a poor guide to the underlying robustness of the advanced economies. A better measure is the implicit loss of output compared to the pre-recession trend. Measured in this way the damage done has been vast and is continuing. A similar view has been expressed by Larry Summers of Harvard when he warns of the risk of "secular stagnation".

An altogether more positive view of the current conjuncture is however also possible. An economist I have come greatly to respect is Paul Sheard who is the Chief Global Economist of Standard and Poo's Rating Services. The tone of his commentary is well-captured in the title of a long essay dated April 16: 'Global Economic Outlook: Gaining Traction, Gaining Balance'. The summary judgment of the essay is that "global growth is likely set to continue and even pick up a notch".

This optimism reflects two judgments: first, that both Japan and the euro-zone were each guilty of serious macro policy errors which have now been corrected; and that the lower oil price is on balance a significant assist to the global recovery. Underlying this view is a strong belief in the power of so-called quantitative easing in dealing with the aftermath of the financial collapse of 2008.

The US recovery is furthest advanced because the Federal Reserve was quickest and boldest off the mark. By contrast the euro-zone and Japan unnecessarily prolonged the agony, but are now set to provide the kind of open-ended assistance that is justified following a balance-sheet crisis of the magnitude that the world suffered seven years ago.

What does any of this imply for India? Governor Rajan has been a critic of this extended period of easy liquidity both for what it implies for capital misallocation in the easy money phase and for what it might imply when time comes to unwind this accommodation. I am perhaps more favorably inclined to the experiments with unconventional monetary policy although I agree that the jury is still out on how the exit will be managed, and the risks and vulnerabilities that will emerge as the tide runs out.

What one is left with is a sense of wonder on how pervasive and long-lasting the damage can be from a balance-sheet crisis, even while accepting that they are not going to go away anytime soon. Meanwhile we remain in uncharted waters, where strong macro policies provide the best compass.