News
Business
Movies
Sports
Cricket
Get Ahead
Money Tips
Shopping
Sign in  |  Create a Rediffmail account
Rediff.com  » Business » Robots are coming to India? Few lessons we must take from China

Of late China has become the largest market for robots. At the end of 2014, the estimated stock of robots in China was about 180,000, says Subir Gokarn. 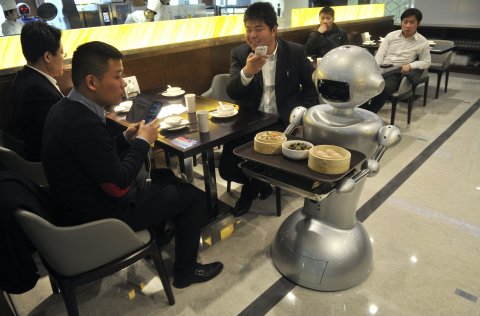 Everybody has a favourite robot from the movies. C3PO with the English accent or R2D2 with the whistles and squeaks from Star Wars?

Sonny the possible murderer from I, Robot? Wall-E the conscientious waste manager from eponymous film? Ra.One?

Whichever one chooses, the common feature of all these and other fictional robots is that they are, at the same time, almost human and not-quite-human - rather like pet dogs. Robots in real life, however, are nothing like pet dogs.

In their industrial uses, they are essentially the next generation of machine tools; extremely fast and precise in performing their assigned tasks, while being extremely flexible in switching from one task to the other.

And they are nowhere near being anthropomorphic.

But their rapid penetration into a whole range of manufacturing activities has significant implications for people-abundant economies like India.

If you had to choose one industry that has done relatively well despite the sluggish global economy, it would be robotics.

The International Federation of Robotics, the global industry association, estimates that almost 230,000 robots were sold worldwide in 2014, about 27 per cent higher than the previous year.

This volume of sales is about twice the level of 10 years ago.

What is more striking about the sales pattern is where industrial robots are being installed.

Over 56,000 of them were deployed in China, about a quarter of global sales.

This may seem like a paradox: the economy with the largest workforce also having the largest robot force. I will return to this point later.

India's workforce is almost as large as China's, but its share of manufacturing in gross domestic product (GDP) is significantly lower, which partly explains the low robot penetration.

But there are clearly other factors at work, too.

To return to the Chinese paradox, why is an apparently labour-abundant economy ramping up its robot force so aggressively?

The obvious and correct explanation is that its cost competitiveness in manufacturing based on low wages is rapidly deteriorating.

The economy has seen rapid increases in wage rates over the past few years, on the back of increasing labour militancy, as demonstrated in the Foxconn and the Honda stand-offs and eventual settlements.

In these and other instances, what is good for Chinese workers is clearly not good for the owners of the factories in which they work.

All this while, the relative cost of robots has been decreasing as prices decline with volumes and productivity increases with technology.

In effect, the apparent paradox is actually a structural shift in the Chinese manufacturing sector, which is seeking to preserve its locational advantage by rapidly transiting from labour to robots.

So far, robots are concentrated in metal-forming industries like automobiles, but their capabilities are expanding so rapidly that they will be elbowing humans out of assembly lines making shirts and shoes as well.

China's big thrust in robotics, which includes the growth of domestic manufacturers in a space previously dominated by Japan and the United States, essentially aims to protect its competitiveness even as wages continue to rise and the size of the labour force dwindles because of ageing.

An underlying presumption in India's collective belief that it will inherit the mantle of "factory to the world" from China is that its labour-cost advantages will eventually motivate producers to relocate labour-intensive activities.

All it has to do to facilitate this is to get the infrastructure and ease of doing business dimensions in place.

Of course, these are intrinsically sound objectives and must be pursued.

But let us not take the risk of believing that this will result in massive increases in jobs in industries that China is losing competitiveness in. All policy thinking about employment generation must explicitly factor in the Chinese strategy of transition from labour force to robot force.

At least three important issues need to be thought through. First, what is the skill-wage-productivity configuration that Indian workers need to achieve in order to out-perform Chinese robots?

It may seem like a lost cause, but there are several industries in which robots are yet to penetrate significantly and this provides opportunities.

But to exploit these, skills will have to be ramped up for large numbers of workers very quickly; further, any process that aspires to be globally competitive will have to have significant capital and technology components.

Second, it is reasonable to expect that growth in Indian manufacturing will take place largely through the integration of Indian producers into global supply chains.

It is virtually impossible now for stand-alone operations to achieve scale economies.

Supply chains may spread across diverse geographies, but their links must conform to some common technological standards.

In other words, if the world is going robotic, Indian manufacturing cannot remain aloof from the trend.

If India's thrust on manufacturing succeeds, it could well find itself in the same paradox as China; having the largest labour resources while being the most attractive market for industrial robots.

This will have significant political economy implications.

Large IT companies typically have business units that provide remote operations-management services - effectively running processes in other countries from Bengaluru or elsewhere in India.

Robots will take such operations to an entirely different level. Entire factories can be run from remote locations, with the operator translating production decisions into activity sequences for robots.

Could one imagine, say, television sets being produced in Guangdong by controllers sitting in Gurgaon?

What implications does this kind of technological possibility have for the bilateral relationship?

The simple point is this. Robotics, and more generally, automation, are inexorable forces.

They are making many kinds of human capabilities and, consequently, the people who possess them, obsolete.

Let's start to think seriously about what this means for India's development strategy.

Image:A robot delivers dishes at a restaurant in China.

Get Rediff News delivered into your Inbox.
Subir Gokarn
Source: 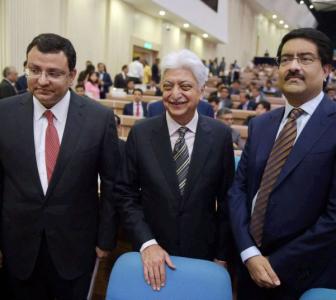 Having Robots for 'Make in India' is not a bad idea 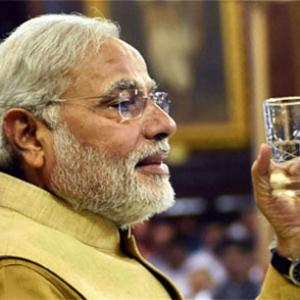