The crushing of this tiny entity by demanding creditors should be a lesson for all countries, warns T N Ninan. 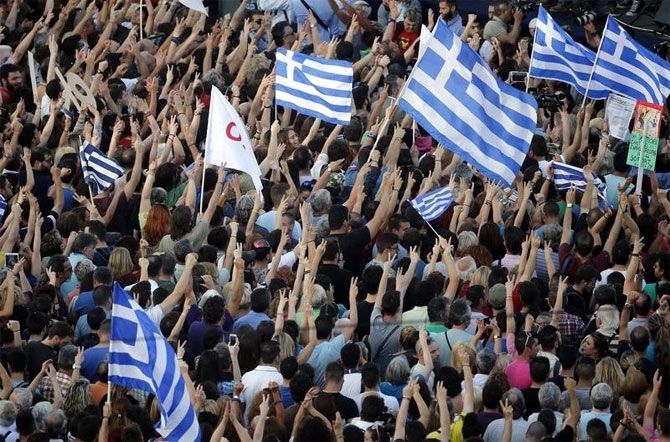 Perhaps Angela Merkel knows the Greeks better than their prime minister, Alexis Tsipras, and finance minister, Yanis Varoufakis. Since the Greek referendum was called on whether to accept still more austerity in return for yet another bail-out, the mood in Greece would appear to have swung quite dramatically. What was strong sentiment in favour of a "No" vote (ie to not accept the terms of a bail-out, and therefore inevitably to leave the euro currency area) has given way in a matter of days to an even split in the latest Bloomberg poll, with 43 per cent intending to vote "No" on Sunday and 42.5 per cent preferring "Yes", with the rest undecided. Another poll says the "Yes" vote is already 47 per cent. In other words, the Greeks (already staring at closed doors of banks) may be pulling back from the brink, for fear of unimaginable chaos.

While it is now impossible to call which way the vote will go, the straw in the wind is the fact that the overwhelming majority (more than 80 per cent) want to stay with the euro. In contrast, barely half of Germany wants to see Greece in the euro tent! If the "Yes" camp (which includes the principal Opposition party) wins, then the Tsipras government will have to bow out. The conspiracy theorists (including the liberal stalwarts Paul Krugman and Joseph Stiglitz) would say a change of government was what the European Troika was playing for all along, so that it could negotiate with more amenable Greek representatives.

Even if the Greeks decide to stay with the euro, it won't be with any joy; life for them will only get more difficult. Per capita income in Greece was 21,500 euros in 2008; last year it was down to 16,300 euros, a drop of more than 24 per cent. Unemployment is as high as 27 per cent, and among the young an incredible 50 per cent. Discipline has come in the form of a reduction in Greece's fiscal deficit from 15 per cent of GDP to about four per cent. Having shrunk the Budget (including welfare payments) and the economy, and paid the bitter price of a sharp drop in their standard of living, what have the Greeks got in return?

Their debt is up from about 110 per cent of GDP to 175 per cent; so they are in a deeper financial hole than they were in, seven years ago. This is despite holders of Greek debt taking massive write-downs of 50 per cent of the money they were owed. These write-downs have been part of two rounds of what are called rescue packages totaling 240 billion euros, but the Greeks saw little of that money; it went largely to their creditor banks in Germany and France.

If this is financial "rescue", the English language needs a new dictionary. It goes without saying that Greece is paying the price for past follies like fictitious national accounts, unsustainable pension programmes, non-existent tax revenues and (the biggest mistake of all) joining the euro currency area. The bitter realisation that will dawn on the Greeks, if they stay with the euro, is that they will continue to pay the price for being part of a strong currency area. So unemployment is not about to come down.

Krugman is right in calling Greece a "financial slave-state". Bear in mind how small it is in Europe. There are 50 per cent more Delhiites than Greeks in the world. The country's GDP is commonly bruited to be less than two per cent of the European total. The actual figure is 1.3 per cent: $238 billion in a European Union total of $18.5 trillion - much smaller than Jharkhand's share in the Indian economy. The crushing of this tiny entity by demanding creditors should be a lesson for all countries: mind your shop well because it is a harsh world out there.