Narendra Modi may discover that his admirable aim of Minimum Government, Maximum Governance would demand deeper institutional change than he bargained for, says Kanika Datta. 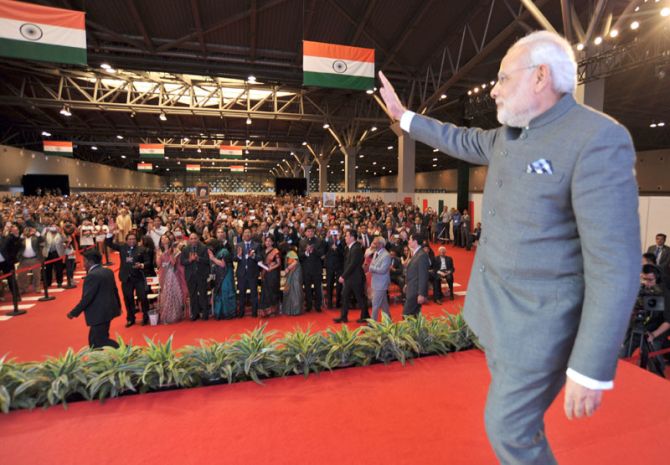 The promise of Minimum Government, Maximum Governance (MGMG from here on) is tantalising.

How this concept will work is unclear but Prime Minister Narendra Modi has made a start by having one of the smallest councils of ministers of the last three governments with 66 ministers.

This is still humungous compared to the governments of the seventies and eighties but consider that the predecessor National Democratic Alliance under Atal Bihari Vajpayee ended up with an 88-member council.

MGMG has been a theme since the first big dose of delicensing in 1991, only earlier regimes weren’t so savvy about branding their efforts.

With the Vajpayee government it was privatisation.

With the United Progressive Alliance (UPA) it was Public Private Partnerships and later, when complaints of “policy paralysis” abounded, a National Investment Board was proposed as a “mother of all single windows” to clear projects above a certain threshold (ultimately, the Prime Minister’s Office did this job). All of these have had varying degrees of success but incremental impacts on India’s reputation as an easy place to live and work.

To understand why even the most MGMG-committed prime minister will struggle to reduce intrusive “government” in favour of “governance” you only have to go through the list of decisions the Cabinet clears each week.

Even a random reading will demonstrate the deeply embedded nature of government in a vast range of activities, some of them mystifying and most a waste of ministerial and, more importantly bureaucratic, time. Here, for instance, is a decision from a November 2004 Cabinet meeting.

It is to approve an amendment of the Sree Chitra Tirunal Institute for Medical Sciences and Technology, Trivandrum Act to provide for “automatic cessation of the membership of an MP elected on the body of the institute in the event of his/her becoming a Minister, or Speaker or Deputy Speaker, Lok Sabha or Deputy Chairperson of Rajya Sabha”.

Sree Chitra Tirunal Institute is a research institute that was set up in 1973 on land gifted by the erstwhile Travancore royal family and was declared an Institution of National Importance under the department of science and technology by an Act of Parliament in 1980. Since it comes under a central statute, even minor changes like this one requires Cabinet-level clearance.

And, here’s some déjà vu. In the same month, the Cabinet also approved the extension of the Justice Mukherjee Commission.

This was a one-man commission set up under Mr Vajpayee’s NDA to enquire into the controversy surrounding Subhas Chandra Bose’s death.

Why did the UPA, six months into its busy first term, bother with this? Because this “enquiry” had been ordered by the Calcutta High Court, no less.

In 2006, when the report was finally tabled, it concluded that the controversial freedom fighter had not died in an air crash in Taiwan (then Formosa) but could now be presumed dead (no surprise, he would have been 109 years old).

The government rejected those findings but the late Mr Bose’s call on governmental time and energy is remarkable, judging by recent events.

The same Cabinet that raised the foreign direct investment ceiling in telecom from 49 to 74 per cent and introduced legislation for a pension regulator, the right to information and the rural employment guarantee programme, to name some of its big-ticket announcement, also had to apply its mind to such issues as: an audio-visual co-production agreement between India, UK and Northern Ireland, renaming Varanasi and Jaipur airports, approving a rehabilitation package for one British India Corporation (a terminal case for decades), a National Policy for the computerisation of the judiciary, a Meat and Poultry Processing Board (yes, it exists!) and the repeal of the Spirituous Preparations Control Act.

The fare and subsidy for Haj pilgrim is also a standard annual fixture for every Cabinet.

Considering these flights take place every year, shouldn’t this be a ministry concern rather than a Cabinet-level one?

The list of Cabinet decisions by the current government isn’t half as much fun, though there’s a preponderance of branded programmes demanding approval.

Unchanged is the sheer reach of the central government as evident in the 20- to 30-odd decisions in each meeting, from reviving state-owned units to approving minor agreements with countries (including one on homeopathy with Mauritius, hardly a pressing item in relations between our two countries) and signing off on posts in a variety of institutions.

We know that Cabinet meetings do not actually expend a great time of time on the agenda since the positions are decided ahead after the Cabinet secretariat circulates it.

Still, if you look at the issue from bottom up, the lives and fortunes of many people are sometimes contingent on its decisions.

Which is why even the energetic Mr Modi may discover that his admirable aim would demand deeper institutional change than he bargained for. 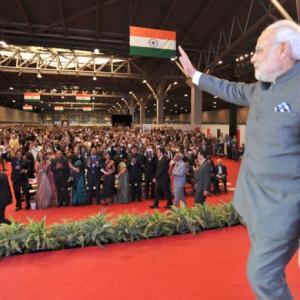