Call it by whatever name, the economic system of modern times favors indiscipline of individuals, societies and governments.

Remember Aesop's parable of ant and grasshopper? The ant works hard all summer and prepares for winter. On the other hand the grasshopper laughs, dances and plays all summer. In the process he  is unprepared for tough days. Winter comes, the ant is safe and warm. The grasshopper, in contrast, has no food or shelter. Consequently, he suffers. 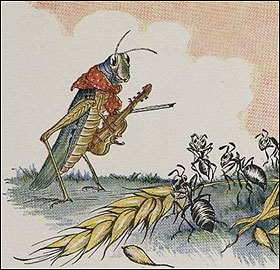 Moral of the story:  Act responsibly.

The 2012 version is as follows: As winter dawns, the ant is safe and warm. Using the shivering grasshopper, an NGO calls a press conference (of course in a five star hotel) and demands to know why the ant should be allowed to be warm and fed, while the grasshopper is starving.

Electronic media instantly provide us live feed of shivering grasshopper, followed by visuals of the ant seated comfortably in his home. Worse still, he is seen having food. The whole country is stunned by this stark contrast. How can we in a socialist democratic secular republic allow poor grasshopper to suffer this way?

Medha Pathkar and Shabana Azmi follow this by staging demonstrations in front of the ant's house. Prakash Karat and Sitaram Yechuri tell us how Karl Marx had foreseen all this as early as in nineteenth century and even provided solutions to such problems.

Naturally, the government is forced to act. The National Advisory Committee drafts the "Grasshoppers' Economic Revival Act" to be implemented retrospectivelty from previous summer. The Act, Kapil Sibal explains, seeks to distribute thousand rupee currency notes through the local PDS shops - seven every month for each adult in every such grasshopper family and four per child per month!

NDTV invites Mani shankar Iyer and Swapan Das Gupta to debate this legislation. We do not know what they  discussed except for the fact that one can remotely conclude that they spoke in English. Arnab Goswami (Editor in Chief of Times Now) calls eight experts. Yet, his is the only voice that was heard. Rajdeep Sardesai (Editor-in-Chief of IBN18 Network) is "concerned" and wants "concerned" citizen journalists to express their views.

"The Hindu" hails this legislation in its editorial as progessive. The Times Of India carries a page three picture of a scantily clad grasshopper in better times, in page one, leaving its readers confused. Others in media welcome this decision  without even understanding its economic and social consequence.

The ant left to fend for himself and ridiculed for being a disciplinarian now sees merit in leading an indiciplined life. The next generation of ants adopt a new role model - grasshoppers.

As all this build systemic indicipline, no one gets any worker to work in their farms, factories or offices. Grasshoppers - the beneficiary of this skewed economic policy - continues to vote governments that provides such doles and  governments continues to subsidize grasshopper for its electoral fortunes.

G for Greeks, G for grasshopper

But if you thought all that I have narrated above is an original one - hang on. Let me make a confession - this is an Indian version of a power point of a similar story being circulated by some of my friends in the US. This power point is supposed to capture fault lines in the debate in US - between Republican voters and Democrat voters.

Put pithily, the debate till date in US has been the role of governments, the nature of its intervention in providing social security to its own people and the manner in which US Federal Government should tax its "rich" people to fund such schemes for its "poor."

While this debate attempts to encapsulate the entire gamut of economic theories, the fact remains that there is hardly any difference in the US, even between Republicans and Democrats! No wonder, while former Republican President Ronald Reagan famously remarked "Government cannot be part of any solution, in fact, Government is the problem," former Democrat President Bill Clinton echoing Regan's idea remarked "the days of big government is over."

In short, while there seems to be an absolute convergence at the macro level in the ideology of presidents Reagan and Clinton in a smaller role for the government, on the ground level the share of government expenditure in the national GDP even in the US continues to be at a stubborn forty per cent over the past three decades. So much for the argument of small goverment, liberalisation, privatisation and de-regulation!

Jeffry Sachs in his recent work - The Price of Civilization has brilliantly captured this convergence of economic ideas between the two political parties in the US, just as it is between the UPA and NDA in India.

Interestingly, despite the overarching idea of liberalisation and de-regulation, it is seen that the size of governments across continents has more or less been what it was three decades ago!

And the beneficiary of a bloated government has been the quintessential grasshopper, so much so, entire nations are now turning into grasshoppers - with little or no faith in work or discipline.

What else would explain the Euro crisis which is all about Greece which encouraged rampant indicipline amongst its population through a dysfunctional taxation system, spent  money recklessly, borrowed beyond its means and finally has a national debt that is simply usutainable. And for all its recklessness, the IMF and other multilateral institutions rush to reward Greece with a bailout - simply because if it goes belly up, the consequences are unimaginable!

Either way, Greeks can continue to be indiciplined and reckless. G for Greece. G for grasshopper.

Where people have no hope of deliverance

Lest the reader come to a conclusion that Greece is probably an exception, let me hasten to add - Greece is not an exception - in fact it is the global rule. Greece has several European countries for compnay as it has in South America, Asia and of course the big daddy of them all - the US too.

Call it by whatever name, the economic system of modern times favors indiscipline of individuals, societies and governments. Ants, it would seem have no place in modern economies where the system continues to subsidise, provide incentives and celebrate indicipline. No wonder, grasshoppers proliferate in modern economies.

But if you thought that all these ideas are a by-product of modern economic thoughts and developments, you could probably be wrong. A reference to a dialogue contained in the classical Indian epic Mahabaratha between Kamsa, (the maternal uncle of Lord Krishna) and his economic advisor Bahuka on the extant subject, especially on role of doles in governance, would be in order.

Bahuka pointed that the only option in the given circumstance was to extinguish any hope of deliverance in his people. For this, Bahuka suggested that Kamsa should be extensively liberal wirth his state spendings; teach his people to eat, drink and enjoy themselves; break up their families; bring up children to look upon their parents as old and useless. In short, encourage absolute indicipline in an individual, society and government.

Once people begin to believe in unrestrained pleasures as their only goal of life, Bahuka opined that people will look upon the disciplined as deranged and selfish; they will laugh at those who talk of duty and other values in life. That will, according to him, effectively put an end to all those who may even remotely suggest discipline.

And finally Bahuka comprehends that when wine flows, self-restraint will disappear; men will be like well-fed cattle at the mercy of their cowherds. Whatever Kamsa would do, people having no hopes of deliverance will bear as patiently as uncomplaining beasts, and obey even his "lash as if it were a favour from Kamsa!"

The problem for the global economy is that Bahuka's advice is now taken far too seriously by modern governments. His suggestion of complete subjugation of men and their debasement through doles has now come to be accepted as modern welfare economics. And to me this is the real problem of global economy as well as modern societies - where discipline of economics is all about economic indicipline.

The Author is a Chennai-based Chartered Accountant. He can be contacted at mrv@mrv.net.in 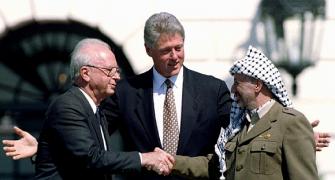 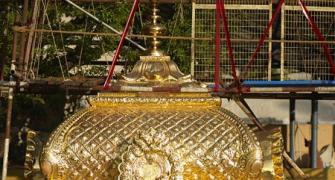 Chennai gets its own Golden Temple 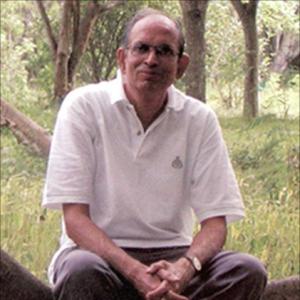 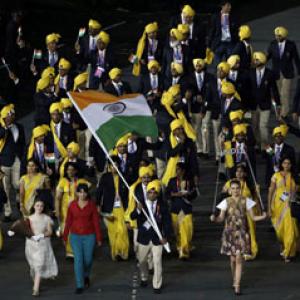