Just as unregulated unauthorised hawkers and their shops can kill a city, some space needs to be carved out for distinctive affordable street food, says Shubir Roy. 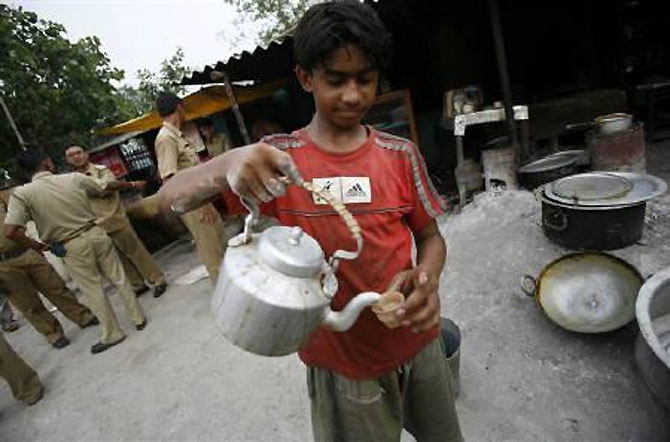 At Rs 5 per small glass of tea rich with milk and a dollop of sugar, it offers possibly the best value for money. Image: A young boy serves tea outside a roadside tea-stall in Kolkata. Photograph: Parth Sanyal/Reuters.

The owner of the roadside tea shop where I have not one but two small glasses of tea every morning after my walk is in the grip of existential angst. A young man active with the local party unit (there is only one visible political party in the area) has asked him to pack up and shift.

The tea shop has been there for three decades or more, he says. Today, one has become a row of three - with a shop manned by a son selling cigarettes and another manned by the patriarch's wife and another son selling telebhaja (fried snacks). Of course the "notice" applies to all three shops and a few more similarly placed.

I patronise the tea shop because at Rs 5 per small glass of tea rich with milk and a dollop of sugar, it offers possibly the best value for money imaginable for roadside tea. Also, the bench before the shop offers a great listening post. A scribe seeking to keep an ear to the ground could not find a better location.

The house against whose boundary wall the three shops and several others rest, is incredibly well located - one side of the corner plot faces the Rashbehari Connector (it links the airport bypass to the shopping hub of Gariahat) and the other faces our lane. And it has changed hands recently. What is more, the connector itself has lately gone sharply upmarket. The latest to open on it, barely a kilometre away, is the huge Acropolis Mall, billed as the city's newest and poshest.

The new owner, who must have paid a fortune for the house and the plot and must want to get the full development value (shops fronting the start of our lane would fetch a fancy price) has presumably engaged the local party man to get rid of the stalls. Nobody has formally approached the tea shop owner, but someone asked him if the local councillor (belonging to the Trinamool Congress) has spoken to him and he said no. 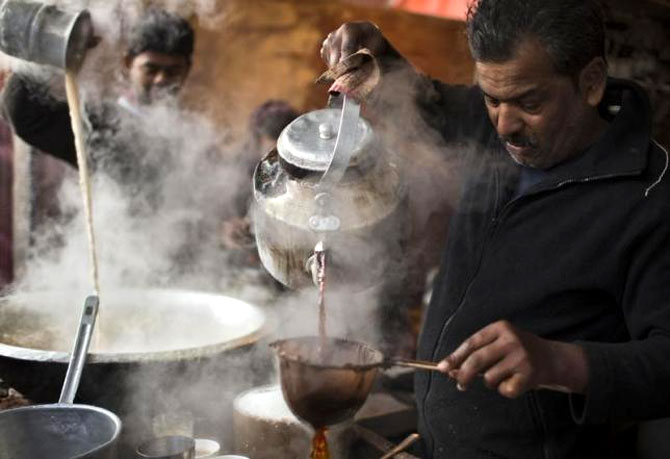 A vendor prepares tea at his roadside stall on a cold winter morning. Photograph: Ahmad Masood/Reuters.

The councillor has some redeeming features. For several years now (till last year he was in charge of roads in the mayor's council) he has been trying to rescue pavements along the connector and the roads going off it. Roadside drains have been covered up, hawkers' stalls rebuilt with decent material so that they don't look like jhopris, and they have been pushed back a few feet. You can't really walk down the pavement as the stall owners now keep their stuff and chairs and benches on it, but still there is some effort to get a bit of pavement back.

Our lane has had similar treatment. The open drains on either side of it have been nicely covered up and even-shaped concrete blocks have created kerbs. The tea shop and other stalls have also been pushed back, cramping them a bit. The unauthorised tap the tea shop owner had installed to get drinking water has been shut so that now a rickshaw ferries water from somewhere nearby in large plastic cans so that tea making and washing of utensils can go on.

When the shops were pushed back I tried to persuade the tea shop owner (I have by now become quite friendly with him) to redesign his shop and even got the interior designer who did up our apartment to come and give some advice. But he goes on in his old way. My pleas to him that he should at least keep the shop and its surroundings clean ("How can you serve such great tea amidst this?" I ask him) have also gone largely unheeded. Such people usually find it difficult to change. 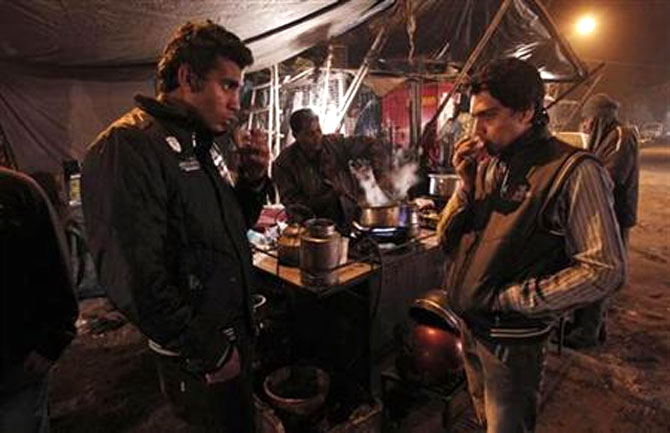 While covering drains has improved our road, on it over time new hawkers keep turning up. Kolkata has a growing hawkers' menace which shows no sign of abating. If someone like our councillor was given a freer hand, things would have probably got better. But he was in a way demoted after the last municipal elections when his portfolio in the mayor's council was taken away.

The Gateway hotel at the nearby crossing with the connector which came up recently initially had a row of hawkers' stalls on the pavement right in front of it. Over time virtually all of them have gone. I can only guess how the hotel managed it.

Just as unregulated unauthorised hawkers and their shops can kill a city, some space needs to be carved out for distinctive affordable street food and Kolkata has its share. Also where hawkers can ply without pushing out pedestrians should do so and earn an honest living.

The state's chief minister had announced with much fanfare, after the Centre passed its own law to regulate street vending, that hawkers in the state would be registered. But the inability of the state to create a town vending committee with hawker representatives on it to demarcate areas for hawking has led to court action and stalemate.

I asked the tea shop owner if he could not negotiate with the new landlord for a little slice of shop-front where he could house his tea shop, but he says he does not know who to talk to. Only the party person has spoken to him. 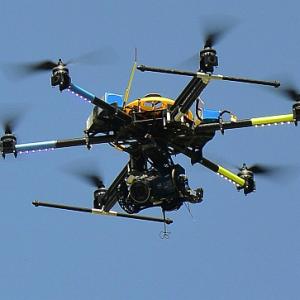 Pakistani tried to smuggle US drones for Pak Army