Congress campaign seeking to paint the ruling party as anti-poor and anti-farmer seems to have unnerved the BJP, feels T N Ninan. 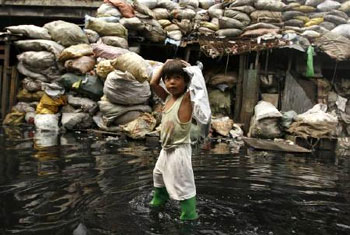 A year ago, the talk by the BJP was all about the neo-middle class. But at its national executive meeting last week, it was all about the garib. The Congress campaign seeking to paint the ruling party as anti-poor and anti-farmer seems to have unnerved the BJP, forcing it to modify the thrust of its economic message. But its actions so far have been at variance with the newfound stress on the poor.

Recall that as far back as 2012, the BJP had talked of the neo-middle class in its manifesto for the Gujarat elections. It dwelt again on the subject in its manifesto for the Lok Sabha elections, pledging to meet the aspirations of this emergent cohort. Indeed, Narendra Modi’s electoral victory had been ascribed by observers to the fact that he better represented the hopes of those who were not quite poor, yet not quite middle class.

So, Arun Jaitley had opened his first Budget speech last July by saying, “Those living below the poverty line are anxious to free themselves from the curse of poverty. Those who have got an opportunity to emerge from the difficult challenges have become aspirational. They now want to be a part of the neo middle class.”

The Congress had once felt obliged to copy the BJP and talk of what it called the aspiring class. At the party’s Chintan Shivir at Jaipur in January 2013, Sonia Gandhi had said that India was increasingly peopled by a younger, more impatient and better-educated generation. Economic growth had had an impact on reducing poverty.

The party’s Jaipur Declaration later said the “Congress acknowledges the fact that there is a rising educated and aspirational middle class, especially in urban areas. We will continue to create new opportunities for them."

Once the BJP came to power, it focused on getting the economy moving, even calling itself a business-friendly government - a first for any government in India. So confident was it about addressing a new, emerging category of citizens that it began dismantling some of the laws that the previous government had put in place to protect the interests of the poor.

Environmental safeguards have been steadily whittled down in the effort to get projects moving. And judging by reports coming in, the rural employment guarantee programme is no longer what it once was. This was a government that wanted to strike out in a very different direction from Sonia Gandhi’s National Advisory Council. But it seems to have developed doubts about the course it has set.

The poor still constitute close to 30% of the population (defined, broadly speaking, as those below the international consumption benchmark of $2 per day, using purchasing power parity or PPP; a PPP dollar is about one-third of a regular dollar). No political party can easily turn its back on so many voters.

Meanwhile, at the top of the ladder, the proper middle-class (internationally reckoned at consumption of at least $10 per day, PPP) may be not more than 20 per cent of the population. If you consider the neo-middle class to be those that fit into the vast spaces between $2 and $10, it accounts for close to half the total population.

The BJP had positioned itself to represent the middle-class and neo-middle class, a group that would expand as incomes grew. And the numbers of the poor, which the Congress sees as its natural bailiwick, would shrink. The maths therefore endorse what the BJP has been doing. So, why is it changing tack? Could it be that the party feels it needs the poor vote because it is not sure it will have the unalloyed support of the non-poor when the next elections come round? If so, can it really be all things to all men?