News
Business
Movies
Sports
Cricket
Get Ahead
Money Tips
Shopping
Sign in  |  Create a Rediffmail account
Rediff.com  » Business » Are we staring at a new NPA crisis?

The measures to reduce the current account deficit should have focused far more on narrowing the trade imbalance, principally through export facilitation and linked FDI, says Nitin Desai. The deteriorating trend of the current account deficit has been known for some time.

But the government reacted only when the fall in the rupee value hit the headlines, possibly because it was concerned about the political fallout in an election year and had to be seen to be doing something.

Recently, it announced some measures. These measures will be touted as a success if the rupee exchange rate fall is arrested.

The view of many economists is that the rupee should be allowed to find its own level so that the impact of the rupee depreciation in stimulating exports and discouraging imports helps reduce the current account deficit.

But these days exchange rates are determined as much by capital flows as by trade imbalances and market expectations.

A falling exchange rate would be a disincentive for new and existing foreign investors, given the expected domestic rate of the return.

Policymakers target exchange rates as they may not be willing to risk such capital outflows given the delicate state of the external balance.

However, the exchange rate is only an instrument.

The real goal must be to reduce the current account deficit which looks like going from 1.9 per cent of GDP last year to about 2.8 per cent this year.

This deficit mirrors an imbalance between the expenditure of domestic households, enterprises and governments and the income generated by production within the country.

This implies that any measure directed at reducing the current account deficit must be shown to be effective in reducing the imbalance between domestic expenditure and income.

The best way to reduce current account deficit is to stimulate exports which will reduce the income-expenditure gap and help to revive growth.

India’s exports grew rapidly during the boom years when the world economy was expanding at four per cent plus and continued to grow even after the 2008 crisis.

Since then, India’s share in global exports has remained static.

Export dynamism is possible. The revival of growth in the United States and the severe measures they are taking against Chinese exports will create opportunities for our exporters.

There are short-term measures that the government can take to improve logistics and export finance, including a smoother process of GST refunds.

But the package of measures announced has very little to say on these issues.

The package is more vocal on reducing imports, presumably with higher tariffs.

The intention is to target products whose reduced availability will not affect domestic production.

Around 60-65 per cent of India's imports are non-competing raw materials and intermediates.

They involve raw materials that we just do not have, such as crude oil, and intermediates such as components for cellphones for which adequate production capacities do not exist in the country.

Around 20 per cent consists capital goods which the government will not want to touch for fear of discouraging investment, whose revival is a key policy goal right now.

That leaves about 10 per cent of imports that consist consumer goods which the government could try and contain with higher tariffs.

However, the government should first look at outflows (under the liberalised remittance scheme), which were over $11 billion last year, the bulk of it for travel, gifts, education and remittances to relatives.

It should be possible to reduce these through taxes or lowered limits without any adverse effect on productivity.

Panicky tariff increases on manufactures, on the other hand, run the risk of reversing the tariff reductions that have stimulated efficiency, cost reduction and global competitiveness in Indian industry.

The real problem is with the third set of measures designed to encourage Indian corporations to borrow abroad and foreign portfolio investors to invest in the Indian debt market.

This will not reduce the current account deficit. It can only improve access to global capital markets to finance this deficit.

With the deficit going up by about one per cent of GDP, the extra inflow of international finance that we need is about $20 billion, if the trade imbalance is not addressed more vigorously than in the proposal.

Because of the sanctions on Iran, crude oil prices are under pressure.

If oil prices rise by another $10 per barrel, with net oil imports running currently at about four million barrels per day, the financing requirement will go up by another $15 billion.

These estimates are additional to the current level of flows, which are assumed to continue - a brave assumption given the current conditions in global capital markets.

The borrowing relaxations are the core of the package at present.

The most problematic one is that borrowers in foreign currency will not have to hedge their future liabilities which saves the current foreign exchange premium cost of  four-five per cent.

But this does not reduce risk. Corporations concerned about their debt position, of which there are many, would not do this.

The ones who will take advantage of this concession are the short-sighted ones who prefer to reduce current costs and take on significant medium-term risks.

On masala bonds, Indian banks will come in as guarantors and foreign portfolio investment in corporate debt will have wider scope.

Consider the scale of additional borrowing required against recent levels of inflow.

According to the balance of payments data, over the past five years ending FY 2018, the average net inflow from commercial borrowings was $507 million and from portfolio investment was $14.5 billion.

Rupee-denominated masala bonds raised about Rs 50 crore over the past two years.

How can these flows go up by $20 billion this year?

Even if this is plausible, is it reasonable to burden our over-leveraged corporations and the banking system reeling under the weight of non-performing assets (NPAs) with this order of debt?

Frankly, we seem to be working our way towards a new NPA crisis.

The measures to reduce the current account deficit should have focused far more on narrowing the trade imbalance, principally through export facilitation and linked FDI.

That would have impressed global capital markets more than the borrowing relaxations that have been announced. 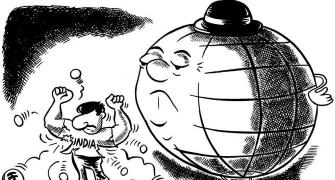