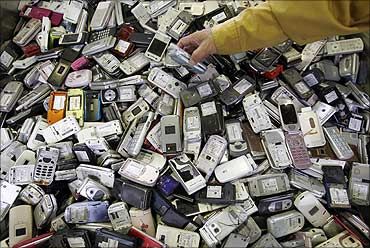 The new rules will hopefully do better

By notifying fresh rules to govern the handling of electronic waste or e-waste (the earlier rules issued five years ago were quite inadequate), the Indian government has taken a key step to combat this most lethal form of pollution.

But hard-to-recover substances from e-waste like mercury make their home in landfills and keep leaching into ground water.

According to a 2011 Rajya Sabha secretariat study, e-waste accounts for 70 per cent of Indian landfills.

The new rules have brought producers of electronic goods under 'extended producer responsibility', making them liable for collection and exchange of e-waste with targets.

The 'extended responsibility' provision was there in the earlier rules also but because of the cumbersome nature of the procedure to be followed, they remained mostly on paper.

A 2005 Greenpeace survey indicated that before the law stepped in, only two Indian producers, HCL and Wipro, had any kind of take-back mechanism in place. Even MNCs operating in India did not have any such facility.

To make procedures easier to follow, the new rules require players in the e-waste life cycle to register with just the Central Pollution Control Board and not have to go through individual state pollution control boards.

However, a big responsibility has been placed on the shoulders of state governments.

It is their job to adequately train and protect the health of workers engaged in recycling.

The key issue is how this will be done.

A lot of the recycling activity is informally organised with workers being poor and ill-informed about safety issues.

E-waste is an important issue for India for several reasons.

For China, the two ratios are about the same.

The US, on the other hand, accounts for a lower share of global e-waste than its share of GDP.

Manufacturing processes in India have to adopt better technology so as to generate less waste.

In fact, in recent years, its e-waste has grown faster than earlier anticipated.

But it stood at 1.7 million tonnes in 2014, the fifth highest in the world, according to a UN study. At the end of the day someone has to pay for the safe disposal of e-waste.

Sunita Narain, head of the Centre for Science and Environment, is quoted in the Rajya Sabha study as saying, "Each company and each consumer must be made to pay a price -- cess for recycling and disposal -- so that we begin to bear the burden of cleaning up the mess we create." 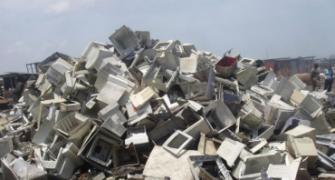