News
Business
Movies
Sports
Cricket
Get Ahead
Money Tips
Shopping
Sign in  |  Create a Rediffmail account
Rediff.com  » Business » Catching criminals via FASTag? Why ever not!

In a country where crimes are rampant, including financial crimes with ATMs sometimes being uprooted and spirited away in vans, electronic payment of toll is a godsend inasmuch as the resultant trail can be latched on to with alacrity by the police to nab the criminals unless of course they seek the safety of tortuous and potholed non-toll roads after committing a crime, writes S Murlidharan. 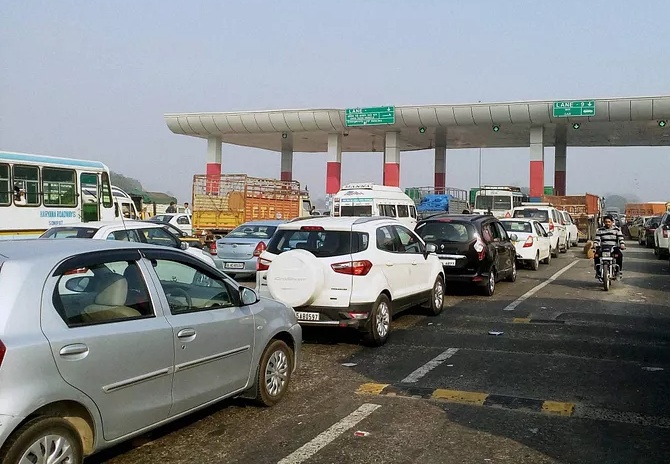 A fortuitous and serendipitous spinoff of FASTag, which the Modi government is introducing and hard-selling for electronic payment of toll on national highways, could facilitate nabbing criminals.

And this spinoff could have a heightened impact if all the states follow suit and join in the national effort to make all the highways -- national as well as state -- a pleasure to drive on for normal people and a no-no for criminals.

Of course this is an incidental benefit of FASTag, with saving precious fuel thanks to less idling of engines on toll booths, saving time for motorists, less overheads on booth management and toll collections and transparency in toll collections, etc being the main advantages thereof.

But as it happens, sometimes a spinoff can over a period of time become one of the major causes for celebration of a measure.

In a country where crimes are rampant, including financial crimes with ATMs sometimes being uprooted and spirited away in vans, electronic payment of toll is a godsend inasmuch as the resultant trail can be latched on to with alacrity by the police to nab the criminals unless of course they seek the safety of tortuous and potholed non-toll roads after committing a crime.

This is not to suggest that criminals will chicken out, deterred purely by FASTag and its dreadful consequences for them but they will surely be dispirited and think several times before committing a crime.

And the mandatory requirement to furnish vehicle registration papers (RC Book) as a precondition for granting FASTag registration and account will eliminate substantially the menace of fake number plates.

Now it would be impossible because Radio Frequency Identification Technology, the technology behind FASTag and its adjunct, electronic payment of toll, would flag the imposters no sooner than they zip past the sensor.

Of course no amount of technology would be of use unless the police are vigilant and present where they should be.

In the US, police lurk at every exit, giving road offenders a hot chase till they are nabbed.

The motorists in the US know that in many of the highways they are monitored from the sky as well and any deviation from the straight and narrow of road discipline would be promptly reported to the law-enforcing agencies in the terra firma! Whether our police too will rise to this new opportunity is the million-dollar question.

In the US, there are cash counters too at turnpikes or toll-roads.

The government seems to be of the view that 25 per cent of the lanes should be reserved for cash and card counters.

Narendra Modi's demonetisation of 2016 was a flop mainly because it allowed too many escape routes -- exchange counters which the crooks thronged through their numerous minions, hospitals, and petrol bunks.

Of course, avuncular and friendly bank branch managers too played a handmaiden role in facilitating conversion of banned notes into accepted ones.

This time round, FASTag should be implemented without any latitude even though that might make our government intolerantly martinet on roads, as it were.

In our country crooks take a foot when given an inch of latitude.

And there is no way people would be inconvenienced by the insistence on FASTag as the only means of driving on highways unbridled and unstopped.

They are sufficiently attuned to the idea of electronic payments and withdrawals with the ubiquitous debit cards endearing them to the card habit.

And electronic wallets like Paytm too have played a catalytic role in fostering the electronic payment habit.

The ubiquitous smartphone has had the effect of making our folks net and online savvy.

In any case, motorists, of all people, cannot complain of being electronic illiteracy so as to latch on to cash.

Therefore, the government must close cash counters on toll roads sooner rather than later.

If Sweden can consign cheques and drafts to the dustbin of banking history, India surely can blaze the trail on toll roads with this revolutionary step.

Every progressive step must wield both the stick and the carrot rolled into one.

FASTag should go beyond tokenism and offer discounts that are substantial.

For, the savings to the National Highways Authority of India and toll booth franchisees are immense.

Sensors like swipe machines in merchant establishments and ATM cash vending machines are one-time investment which they would recover many times over, thanks to enormous savings in operating toll booths including on staff expenditure.

Part of the savings must be given to the users in the form of stepped up discounts that go up with the amount prepaid.

The itinerant vendors who flock the toll booths and sell local snacks and fruits would of course be put out of business.

They must seek solace and employment elsewhere.