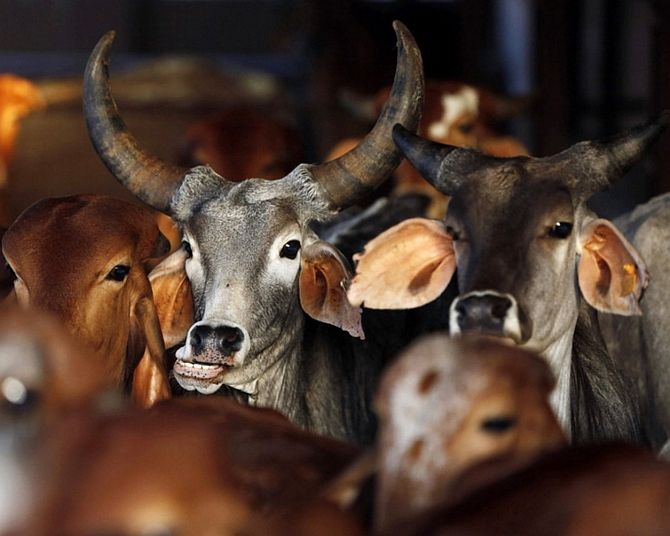 Now that things have cooled down a bit, it is time to look at the beef consumption issue in an unemotional way.

My article looks at three issues. One, based on a book by noted Gandhian Dharampal about the British origin of cow slaughter. Two, if slaughter of cows is sanctioned by Islamic scriptures since willy-nilly Muslims have been cast as villains in the piece; Three, the environmental impact of beef consumption.

An excerpt from the preface of the book The British Origin of Cow-Slaughter in India authored by Dharampal and T M Mukundan, published by the Society for Integrated Development of Himalayas:

'Before they came to India, Asian Muslim immigrants diet consisted of eating some type of bread with flesh of sheep, goat and camel. On festive and religious occasions (esp. Bakri Id) Islamic tradition prescribed killing and eating of goat, sheep and when there were seven or more to share the feast a camel was sacrificed.'

'In India, with time the slaughter of camel was replaced with cow. Later on, as there was natural animosity between Indian people and Islamic conquerors, the latter at times to humiliate local sentiments, began to kill the cow to show the conqueror's power. Political necessity induced many Muslim kings at various times to forbid cow slaughter.'

'It can be reasonably assumed that there was very little cow killing after about 1700 AD since the domination of Islam waned and converts to Islam did not take to eating of cow flesh.'

'State-sponsored and State-regulated slaughter of cattle would have started, depending on British military requirement, some time after 1750 AD. This required professional butchers. Such butchers could to an extent be had from the Muslim communities who engaged in such tasks or such persons /communities who could be persuaded to become butchers of cattle.'

'That the Muslims continued to sacrifice the cow at least on festive occasions like Bakri Id and they were made to feel that the job of a butcher was honourable was also a basic political requirement of the British rule in India.'

'But for the British it was a matter of importance that the Muslims assumed a separate identity, social intercourse with other Indians reduced and with passing of time Muslims began to live separately in distinct localities. Similar separation of persons of different Christian denominations took place in Europe from about the mid 16th century.'

'We must thank Queen Victoria for having broadcast the truth about widespread cow-killing in India, by the British, in her letter dated December 8, 1893, to Indian Viceroy Lansdowne. 'Though the Muhammadans' cow-killing is made the pretext for the agitation, it is in fact, directed against us, who kill far more cows for our army, than the Muhammadans'.

'The anti-kine killing movement from about 1880-1894 was actually against the cow-killing to supply daily beef to the over 1,00,000 British soldiers and officers/civilians.'

'It could perhaps also be that Muslim insistence on cow slaughter, wherever it is said to have prevailed in India since 1880, has been the result of British insistence that Muslims should continue to observe what the British called the Muslim tradition of killing the cow.'

'Such a sudden increase in cow slaughter, along with the increased impressment of strong bullocks to transport the British army whenever it moved to a new location, greatly alarmed the people.'

'The first major expression of Indian anger was given by the Kukas (Namdhari Sikhs) and a few years later Swami Dayananda Saraswati and other sanyasis gave the call for the stoppage of cow slaughter by the British and suggested the formation of Go-samvarshani Sabhas. (Note that when the British first conquered Punjab, they promised to enforce Sikh Darbar's prohibition of cow slaughter.)'

'Though suppressed in 1893-94 the anti-kine killing movement continued haltingly till 1947.'

Like the Aligarh Movement, encouraging slaughter of cows was one of the many tools employed the British to accentuate the Hindu-Muslim divide.

The success of the British can be gauged from the fact that freedom to perform cow slaughter was one of Mohammad Ali Jinnah's demands in his correspondence with Jawaharlal Nehru.

During the recent controversy, many learned people sought to justify the consumption of beef today by saying Indians ate it thousands of years ago. But what matters are the beliefs and traditions today, which are about a thousand years old, rather than what happened 2,000 to 4,000 years ago.

My second point is, why are Muslims perceived as consumers of beef, where a small rumour can set off a violent reaction against the community? Before getting to it, let's look at a recent incident in Mumbai when a group of Muslims moved the Bombay high court to lift the beef ban in Maharashtra for Bakri-Id.

Cow slaughter had been banned in the state, and the new BJP-Shiv Sena government got a law passed to include bulls and oxen too in the slaughter ban.

For those who don't know the origin of Bakri Id, here's a primer: 'It was on this day that God decided to test the faith of Abraham. It so happened, that Abraham, who was one of the Prophets of God, saw a dream in which, the almighty commanded him to sacrifice his son.'

'Abraham and his son both showed willingness to perform this ultimate sacrifice and just after slitting his son's throat Ibrahim looked at the alter, where he expected to find his son's lifeless body, he saw a dead ram instead and his son was standing hail and hearty. God delivered his son from death, as the duo had passed his test of faith. Thus, to commemorate the devotion, spirit of sacrifice and unquestioning faith in the almighty, Muslims perform animal sacrifice and offer prayers, to mark this occasion' Source (external link).

Please note, in this, there is no reference to slaughter of cow or bulls, but only to a goat that had been sacrificed in place of Ibrahim's son.

The question then arises why, in September 2015, did 'sections of the Muslim community petition the Bombay high court seeking a relaxation on the complete ban on slaughter of cows, bulls and bullocks for three days from September 25 to 27, maintaining that slaughter was an essential part of the Muslim religion'?

The Bombay high court refused to grant an interim stay on the ban on slaughter of bulls and bullocks for Bakri Id.

There is no ban in Maharashtra, or elsewhere, of slaughter of goats and other livestock, so what did the groups of Muslims want included in the slaughter list? More importantly, why?

Dr B R Ambedkar wrote in 1941: 'Islamic law does not insist upon the slaughter of the cow for sacrificial purposes and no Musalman when goes to Haj sacrifices the cow in Mecca or Medina'.

It is well known and widely accepted that followers of Dharma (Hindus, Jains, Sikhs and Buddhists) consider the cow to be sacred. Can scholars of Islam tell India whether Islam sanctions the slaughter of cows? Nothing like a good, healthy two-way debate.

We need to realise that every culture has its own sanctity. For example, in England they have similar sentiments with respect to horse and dog meat. Even during the war, when there was a great shortage of food, horse meat was never eaten.

Perhaps the most important reason why consumption of beef needs to fall is its adverse impact on the environment.

But even a partial shift in meat-consumption habits -- with consumers choosing options like chicken and seafood, instead of beef -- could have a far-reaching impact. Indeed, beef production requires, on average, 28 times more land and 11 times more water than the other livestock categories, while producing five times more greenhouse-gas emissions and six times more reactive nitrogen.'

We are already facing a water shortage in many parts of India. Water tables are falling and climate change is affecting monsoon patterns. Water is a bare necessity for every human being -- it does not distinguish between followers of Dharma and others.

Sanjeev Nayyar is the Founder, www.esamskriti.com 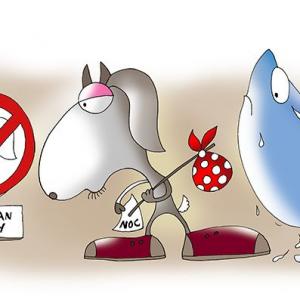 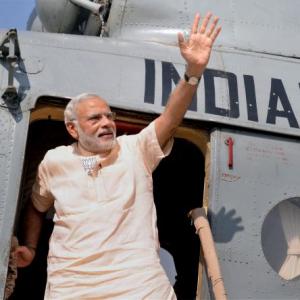