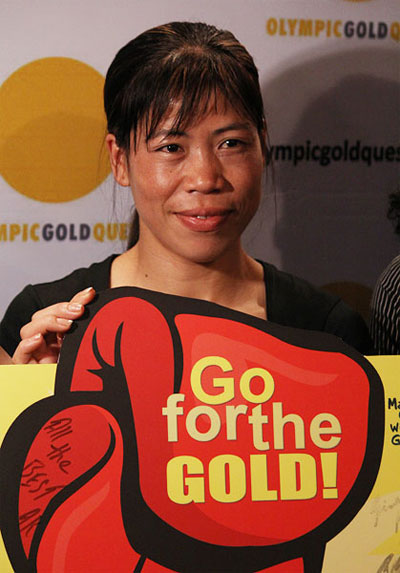 For the average Indian woman, making a mark in the world outside of home is a big deal.

Imagine a young girl, travelling miles early in the morning to a camp, training hard to gain perfection in a sport she excels in and then going about her daily routine. Nothing has ever come easy for a woman in a chauvinistic society like ours.

On International Women's Day Norma Godinho showcases Indian sportswomen who, with sheer grit and determination, left their stamp in a male-dominated arena and brought the country laurels along the way.

This lady can pack a mean punch, and quite literally!

MC Mary Kom has made a name for herself after numerous accolades by knocking out several opponents in the ring in a decade-long career.

Starting at the age of 18, the 'magnificent' Manipuri etched her name on the international scene instantly. She won a silver medal (48kg category) in her debut international tournament -- AIBA Women's World Boxing Championship in the United States, and then there was no looking back for this pint-sized champion.

The Arjuna awardee (2003) grew from strength to strength, winning national and global tournaments, including five World Championships (48 kgs category). Her recent and most lauded successes include a bronze (flyweight) at the Asian Games in 2010 and a bronze (flyweight, 51kgs) at the 2012 London Olympics.

A keen music lover -- Mary enjoys her guitar sessions at leisure -- she is a mother to twin boys, Rechungvar and Khupneivar.

She also plays mentor to a number of young, up and coming boxers who train at her academy in Manipur. 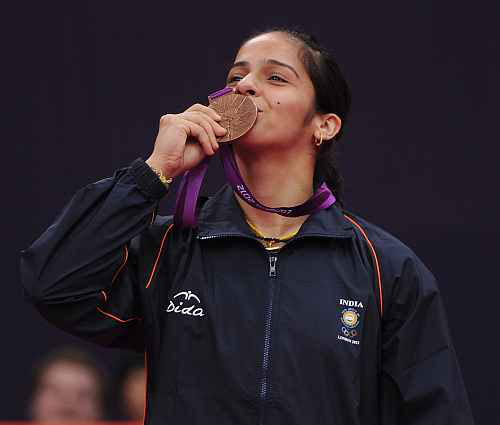 A story of grit and gumption, the super-talented Saina Nehwal has many firsts to her credit. In 2006 she became the first Indian woman to win a 4-star tournament, the Philippines Open, at the age of 16.

The Haryana-born athlete gradually made her mark globally, winning the World Junior Championships 2008.

More success followed and she became the first Indian to reach the quarter-finals at the Olympics, at Beijing in 2008. She upset the World No 5 and fourth seed Wang Chen of Hong Kong in a three-game thriller, but lost the quarter-final to World No 16 Maria Kristin Yulianti.

She is also the first Indian to win a Super Series title, in Indonesia in 2009.

Subsequent success saw her climb the rankings. She rose to No 2 and duly honoured with the Rajiv Gandhi Khel Ratna award the same year.

The 2010 Commonwealth Games champion, ditched Karate at the age of 8.

India's highest-paid non-cricketing sportsperson, she proved she was meant for the badminton court when she clinched the bronze medal at the 2012 Olympics.
Tags: 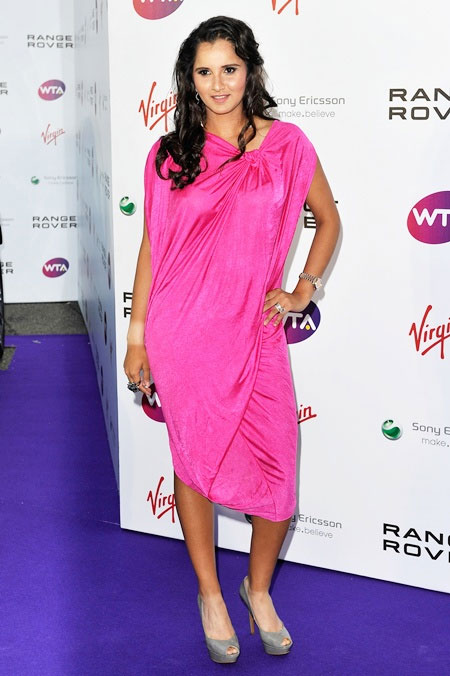 She was one of the first girls to officially put the modern Indian sportswoman on the international radar. Other than Leander Paes and Mahesh Bhupathi (their countless fights notwithstanding) Indian tennis had no real heroes.

At the turn of the century, and with Paes and Bhupathi's growing success, tennis got its share of media attention. Then came this young lady, who, at 16, grabbed the nation's attention.

With more wins on the ITF circuit, the Hyderabadi soon became a household name.

Her big break came in 2005, when she won her first WTA title, clinching the Hyderabad Open.

The success garnered her instant fame. It was her breakthrough year and she went on to qualify for the main rounds of the four Grand Slams.

An Arjuna awardee, she is the first Indian woman to reach the fourth round of a Grand Slam tournament, at the 2005 US Open, losing to top seed Maria Sharapova in the Round of 16.

At the 2006 Doha Asian Games, Mirza clinched gold in mixed doubles and silver in women's singles and the team event.

She also became the first woman to break into the top-30 in the world rankings -- reaching World No. 27 in the list.

A spate of wrist injuries didn't dampen her spirit.

In 2009 she won her first Grand Slam title, partnering Bhupathi to claim the Australian Open. Two medals at the 2010 Delhi Commonwealth Games and she was hungry for more success.

She again joined Bhupathi to win her second Grand Slam title, with victory at the French Open in 2012.

A strong-headed lady, she defied cynics and married Pakistan cricketer Shoaib Malik in 2010, making it one of the most talked about marriage alliances in the history of both nations. 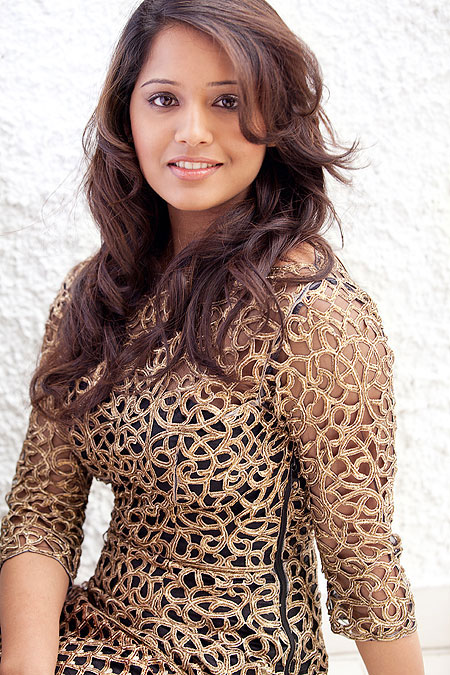 This 21-year-old took to squash quite accidentally and started her international career at the tender age of 12. She turned pro in 2006 and met with mixed success.

The Chennai lass wasn't receiving too many accolades on the squash court. That prompted her to move to the mecca of squash, Egypt, for a brief training camp. It proved profitable and Dipika's performances began to rise sharply.

She started to taste real success only as late as 2011 when she won three WISPA (Women's International Squash Players Association) titles. In the same year she became the first Indian woman to break into the top-20 of the world rankings, bettering the 27 rank held by former national champion Misha Grewal.

She carried her good form into 2012, entering finals of the Australian Open and the Tournament of Champions in New York.

Her consistency on court was rewarded with the Arjuna award last year, and in December 2012 she became the first Indian squash player to be ranked No 10 in the world.

An avid shopper, high street brands like Zara, H&M and Top Shop are among some of her favourites. She was also featured on the cover of JWF magazine.

Her stunning looks won her a modeling contract with Globus Ltd.

- 'My ultimate goal and dream is to be ranked No 1' 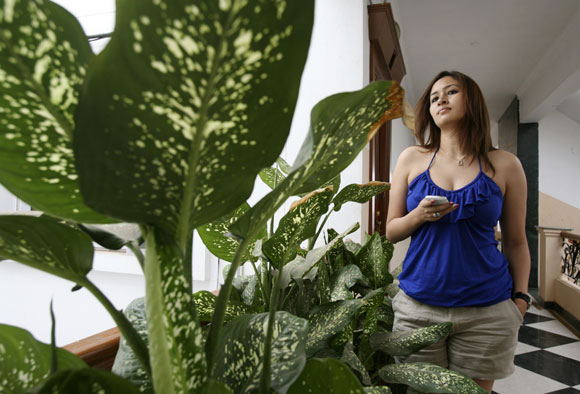 The queen of controversy, she is the epitome of a strong, modern Indian woman who doesn't hold back.

Be it squaring off against the BAI (Badminton Assiociation Of India) officials, saying they have done nothing for players, calling herself better than Saina or brushing off controversy over an alleged affair with former India cricket captain Mohammad Azharuddin, Jwala has spoken her mind freely, every time.

This badminton champion's on-court successes have been overshadowed by her bold persona, but let's take nothing away from this champion.

Gutta partnered Ponappa at the 2012 London Olympics, but the pair lost at the group stage itself.

Keeping in mind her fiery image and pretty face, Gutta did a tantalizing photoshoot for July 2012 edition of Man magazine.

Earlier this year she was roped in to do an item song for a Telugu film, titled Gunde Jaari Gallanthayyinde.

- 'BAI has done nothing for any player'

- Jwala Gutta to shake a leg in a Telugu film 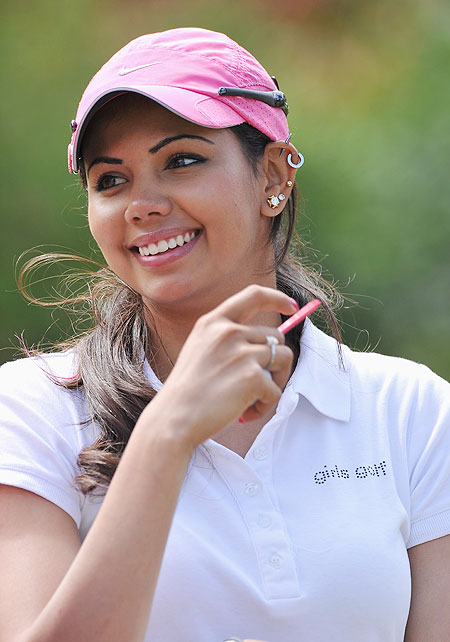 A multi-talented persona in the sporting arena, golfer Sharmila Nicollet was a sub-junior swimming champion at state and national aquatic meets. This Bangalorean was also a state-level athlete in her school days.

Born to a French father and Indian mother, Sharmila always had golf close to her heart, and at the age of 11 played her first golf tournament.

She turned pro in 2009 and soon after, in 2010, was awarded the WGAI Professional Player of the Year.

The 21-year-old became the youngest Indian golfer to qualify for Ladies European Tour (LET) 2012 with a full tour card and retained her LET card for the second successive year in 2013.

Bringing more honours to herself, this sexy golfer also won the third leg of the Hero WPGT13 at the Bombay Presidency Golf Club last week.

Sharmila hopes to one day win a tournament on the European tour and qualify for the LPGA, where her "ultimate dream is to become World No 1".

With her brand of snappy fashion and strong game, Sharmila wants to use these as a bait to attract youngsters to the sport.

May the force be with her! 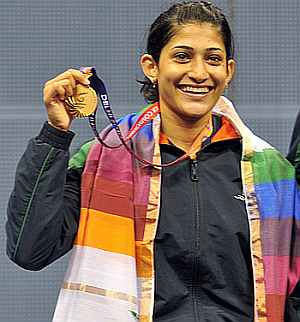 At just 12 years of age, Ashwini Ponnappa made waves in the national badminton circuit. Under the guidance of former champion Prakash Padukone she won the junior championship in 2001.

She clinched her maiden major title when she struck gold at the South Asian Games in 2006. To further her career, she was advised to shift to Hyderabad and team up with Jwala Gutta. She made the adjustment and the dividends paid off when four years later, she and Gutta to brought more honours to India, clinching gold at the 2010 Delhi Commonwealth Games.

The pair later won a bronze at the World Championships last year, only to broaden her disarming smile.

She and Gutta made it to the 2012 London Olympics, but success evaded her there. This year Ponappa partnered Pradnya Gadre and reached the quarters of the Malaysian Open.

In a recent interview, Ponappa revealed that she has a massive sweet tooth and was frank in asserting that India's badminton doubles players don't get recognition they deserve which can be demotivating. 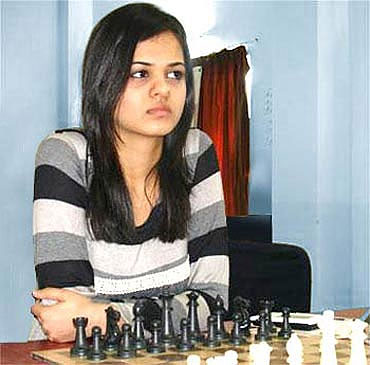 She won the Asian Chess Championship 2008 with six-and-a-half points out of nine rounds and was conferred the Arjuna award in 2009.

A bronze at the Istanbul Chess Olympiad in Turkey added to her reputation.

A fan of V Anand, it was only through the guidance of her parents that she has come this far.

At 26, her future looks bright. A promising career in the game lies ahead of her. 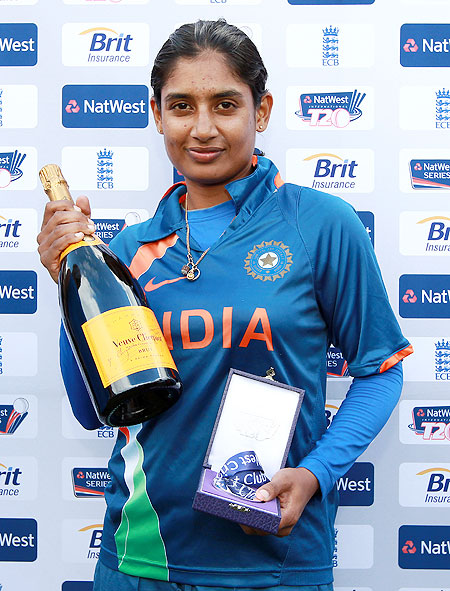 She is just 30 of age and already regarded as a cricket legend.

The captain of the Indian team, Mithali Raj impressed fans and critics right from her debut match against Ireland in 1999, at the tender age of 17. She scored 114 runs without getting out in that match.

She can easily be termed the Tendulkar of women's cricket considering the plethora of records against her name.

In 2002, at the age of 19, in her third Test, she broke the record of the world's highest individual Test score of 209, set by Karen Rolton.

Mithali surpassed that to record a new high of 214 against England in the second and final Test at Taunton.

She also held the record for the highest individual score by an Indian woman cricketer in a World Cup match (91 not out) against New Zealand in 2005 Women's World Cup.

Her team-management skills were highlighted when in August 2006 she led the side to their first-ever Test and series victory in England.

Later that the year, winning the Asia Cup -- the second time in 12 months -- without dropping a single game, made her one of the most successful captains to lead the Indian women's cricket team.

An ardent fan of Mark Waugh, Mithali was ranked No 1 in ODIs last month.

Making bowlers and fielders dance to her tunes comes naturally to this champion cricketer, considering she was learnt Indian classical dance, Bharat Natyam, during her childhood. 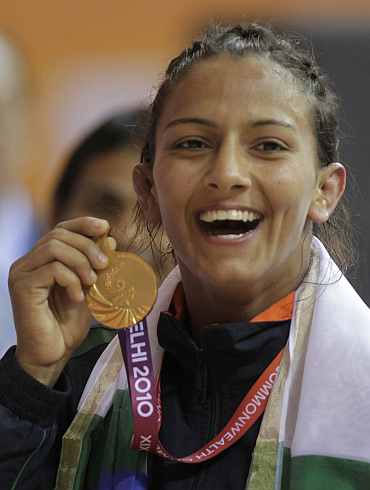 Born in a family of wrestlers, this Jat woman has the distinction of being the first Indian woman wrestler to qualify for the Olympics.

Her talent has garnered her many international laurels, including three consecutive medals in the Asian Cadet Championships in 2003, 2004 and 2005. She also clinched the Commonwealth Championship in 2009.

She catapulted to fame after winning the gold medal in the 55 kg freestyle category at the 2010 Commonwealth Games.

She wasn't too successful at the London Olympics, but later that year she won a bronze at the senior women's World Wrestling Championship.

She ended 2012 on a high, with a gold in the FILA Asian Olympic Qualification Tournament.