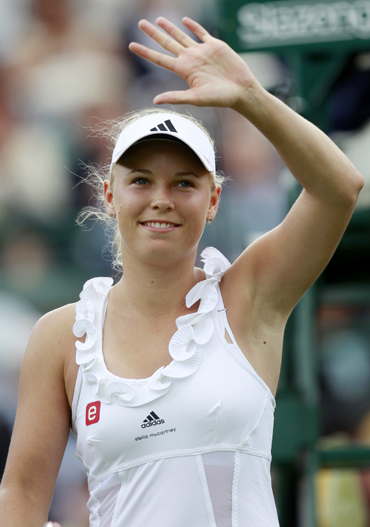 World number one Caroline Wozniacki got her bid for a first grand slam title off to a fine start with a 6-2, 6-1 win over Spain's Arantxa Parra Santonja in swirling winds at Wimbledon on Tuesday.

"I thought it was very difficult. First, it was my first match on grass, a real match. But then, you know, the wind was blowing everywhere," the Dane told a news conference.

"There was one point where I hit the ball and it almost didn't come over and then I hit the next one and it just flew. I tried to adapt as good as I could and hopefully I'll be ready for the next match as well."

The 20-year-old, often criticised for holding the number one spot despite never winning a grand slam, was never troubled by her 105th-ranked opponent.

Wozniacki needed less than an hour to set up a second-round clash with France's Virginie Razzano.

She also began the French Open last month in decent form but crashed out to Daniela Hantuchova in the third round to sharpen the critics' pencils but Wozniacki does not care about the jibes regarding her top ranking.

"I just go out there and play," she simmered. 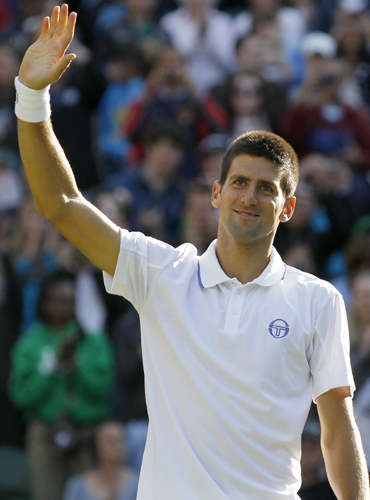 Novak Djokovic crushed Jeremy Chardy 6-4, 6-1, 6-1 on Tuesday in a highly impressive start to his bid to win a first Wimbledon title.

The Serbian second seed, who has only lost one match all year, overpowered Frenchman Chardy with a superb display of grasscourt tennis.

"It was quite difficult for both of us, a lot of wind but I managed to get that crucial break in the first set," Djokovic said in a televised interview.

"(Nadal and Federer) deserve the roles of the favourites in this tournament. I am one of those players behind who is trying to work hard and wait for his chance."

Djokovic, wearing a strap below his left knee, broke the world number 54 twice early in the second set to storm to a 4-1 lead.

Chardy often seemed to struggle to return his opponent's powerful shots, one of which ricocheted off the side of his racket and high into the crowd, narrowly missing an elderly lady before being caught by a steward.

The third set was largely a repeat of the second as Djokovic broke the 24-year-old's first service game to take an early lead.

A dejected looking Chardy clawed one game back from the world number two before netting the ball twice to give Djokovic the final break he needed.

Djokovic served brilliantly throughout the match, wrapping up an emphatic victory in one hour 20 minutes. 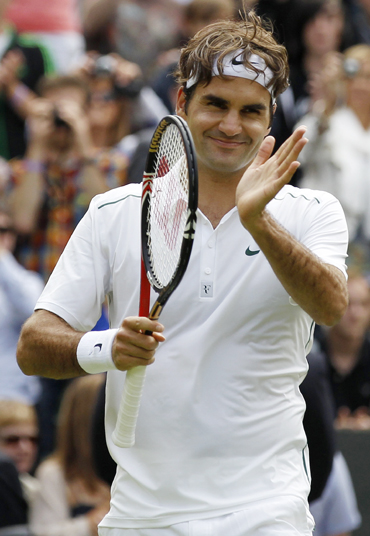 Roger Federer overcame a plucky Mikhail Kukushkin and a chilly breeze to book his place in the Wimbledon second round with a classy 7-6, 6-4, 6-2 victory on Tuesday.

The six-times champion had a tough start last year against Alejandro Falla and his opponent from Kazakhstan served powerfully to cause Federer a few problems on Centre Court.

"The first match at Wimbledon is never easy. I struggled to get enough returns in during the first set. He played well," Federer said in a televised interview.

"It was tricky conditions, a lot of wind. It was really strange how the wind came in."

The Swiss had to wait until the first set tiebreak to see a glimpse of an opportunity and he took it with gusto when the world number 61 netted and then sent a wild shot whistling through the biting wind.

With the England cricket team watching on from the Royal Box, Federer began to produce his own array of cultured strokes in the second set as the fine form he showed to finish runner-up to Rafa Nadal at the French Open continued.

Two impudent volleys and a sublime passing shot were followed by a remarkably low-bouncing slice on the grass which helped the third seed steal the break for 3-2.

From there on it was largely a procession for the record 16-times grand slam champion, who last lifted his cherished Wimbledon trophy in 2009 and next plays Conor Niland of Ireland. 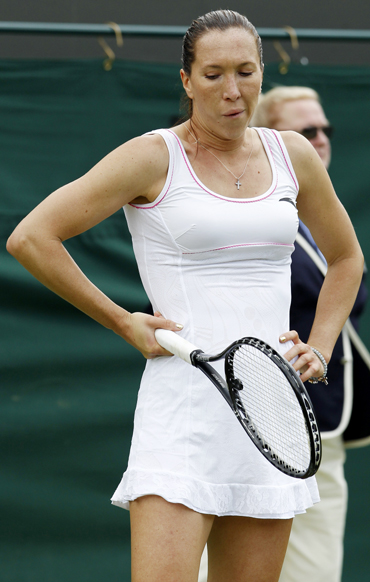 The two surprise women's semi-finalists from last year both eased through to the second round.

At 4-2 down in the second set Glatch, wearing strapping on her left leg and ankle, battled hard to stay in the match, saving two break points, before eighth seed Kvitova fired a powerful cross-court backhand past her to take the game.

As fans outside the court strained to catch a glimpse of the action, the 21-year-old left-hander polished off her win with an effortless ace to set up a second round with Britain's Anne Keothavong.

It was a similar story on court 19 as 23-year-old Pironkova, who last week lost to Serena Williams in the American's first match back after nearly a year off, broke world number 122 Giorgi in the second game to take an early lead.

A double fault by the error-prone Italian handed Pironkova the first set and the she stormed to a 5-0 lead in the second with her powerful serve too much for Giorgi to handle.

She will face Croatia's Petra Martic in the second round. 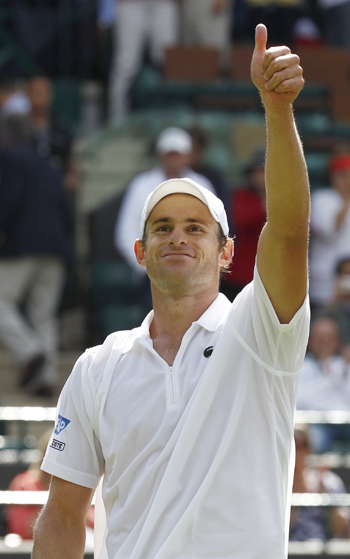 Andy Roddick, another American who has become a favourite son in this leafy suburb of London courtesy of his three final defeats by Roger Federer, also progressed to the second round.

The 28-year-old, playing in his 11th Wimbledon, beat German qualifier Andreas Beck 6-4, 7-6, 6-3 on Court One to maintain his record of always reaching the second round.

Twice he was unable to make much impression on the Swiss maestro, who had also beaten him in the 2003 semi-finals, but in 2009 he came agonisingly close before eventually going down 16-14 in the fifth set of a classic encounter.

"I think a lot changes over the course of 10 or 11 years but it's tough for me to look at my relationship with the fans here objectively," he said.

"I know from my end I certainly enjoy it but I'm not going to speak for them, though they've always been great to me." 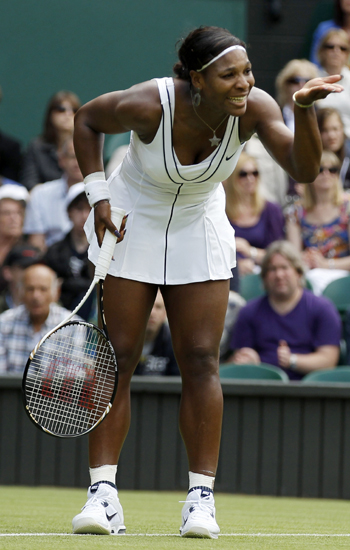 An emotional Serena Williams survived a stern test of her form and fitness to begin her Wimbledon defence with a 6-3, 3-6, 6-1 victory over tenacious Frenchwoman Aravane Rezai on Tuesday.

The 29-year-old seventh seed, whose participation in the tournament looked in doubt after 49 weeks out with a foot injury and serious health problems, flirted with a shock exit before her trusty serve and baseline power came to the rescue as she completed victory in one hour 36 minutes.

After ending the Centre Court contest with an ace the four-times champion buried her head in her towel and wept.

She was still teary-eyed when she gave a televised interview at courtside.

"It's been so hard, I never dreamt I would be here right now," the American, who is bidding to become the first player since Steffi Graf in 1993 to win three consecutive Wimbledon singles title, said.

"I just wanted to win just one match here seeing as I'm not playing doubles, it was just a really big win for. It's been so hard and a disaster year for me, but I've been praying and I have my family here and I just love tennis," added Williams who suffered life-threatening blood clots on her lungs in February.

It was only her third competitive match since last year's final victory over Vera Zvonareva, two weeks after which she cut her foot open in a Munich restaurant and needed 18 stitches and then surgery to repair a partially severed tendon.

As welcome backs go it was a tough one against an opponent who was once ranked 15 in the world but who has slipped after her own off-court problems this year.