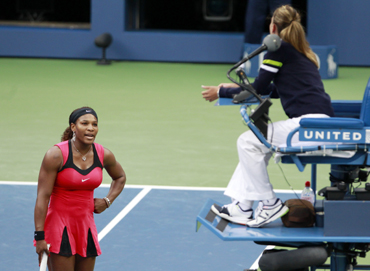 Serena Williams is under investigation by U.S. Open tournament officials for the ugly outburst she directed at the chair umpire during her loss to Australian Sam Stosur in the final on Sunday.

Williams was issued with a code violation for verbally abusing chair umpire Eva Asderaki in the second set and could face further penalties, including a fine and suspension.

Tournament referee Brian Earley issued a statement saying he was reviewing the incident on tape and wanted to speak with Asderaki to determine whether Williams should be fined.

A decision will be made on Monday, according to the U.S. Tennis Association.

Serena was fined for her foul-mouthed tirade in 2009 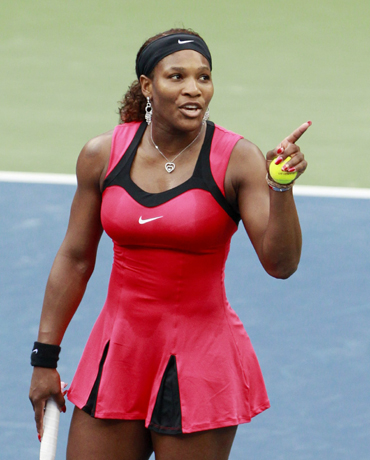 Williams is currently under probation for her foul-mouthed tirade during her 2009 U.S. Open semi-final loss to eventual champion Kim Clijsters.

She was fined $82,500 and warned that the fine would be doubled and she could be suspended from other grand slams if she committed another "major offense" in the next two years.

The probation was due to expire after the U.S. Open.

"Any impact this code violation might have on Serena Williams' grand slam probation would require the incident being ruled a major event," the statement said. "That determination will be made by the grand slam committee director."

Williams lost her temper early in the second set 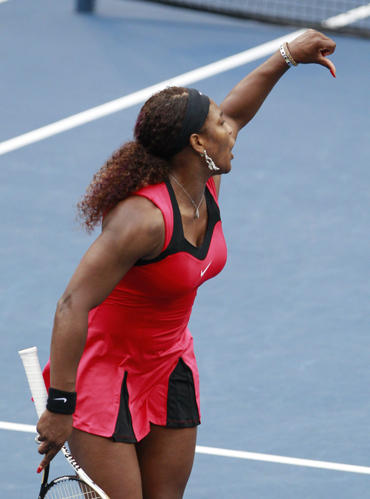 After losing the first set 6-2 in 31 minutes, Williams lost her temper early in the second set when she was docked a point for celebrating a winner with a loud "Come on!" just as Stosur was about to try and return the ball.

Williams was issued with a code violation after arguing with the umpire then continued berating her when she sat down at the change of ends.

Her angry display threatened to overshadow a brilliant performance from Stosur, who played the match of her life to defeat the most formidable player of her generation and capture her first grand slam title, spoiling American hopes of a home-bred champion on the emotional night.

'Code violation for this? I expressed myself' 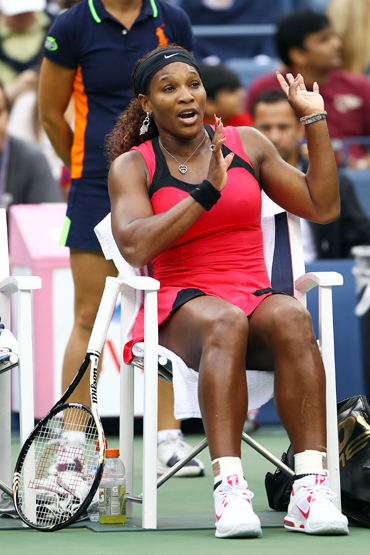 Image: Serena Williams of the United States argues with chair umpire Eva Asderakia (not pictured) during a break in play against Samantha Stosur of Australia
Photographs: Getty Images

At the completion of the match, she did not shake the official's hand.

"If you ever see me walking down the hall, look the other way because you're out of control," Williams told the umpire.

"You're out of control. You are unattractive inside.

"Code violation for this? I expressed myself, we're in America last time I checked. Don't look at me. Don't look my way."