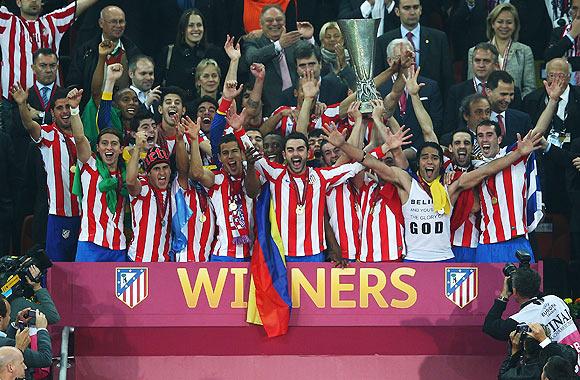 In the final analysis, it was about two men.

Atletico Madrid's comprehensive 3-0 win over Athletic Bilbao in the Europa League final in Bucharest on Wednesday was a memorable one in many ways.

The triumph was Atletico's second in three seasons, having beaten Fulham in the 2010 final, and a special one at that. Marcelo Bielsa's side, which only fields players of Basque origin, was the most impressive side in the run-up to the final.

Bilbao, having been fortunate to qualify for the competition in the first place, had upset the likes of Manchester United, former champions Schalke and former finalist Sporting Lisbon en route to the decider.

However, it was the Madrid team that delivered in the Romanian capital.

Atletico used their overall experience and superior record in Europe -- having won the now defunct Cup Winners Cup (1962) and been the beaten finalist in the European Cup (1974) besides their triumph in this competition two years back to good effect.

Atletico Madrid's triumph was a team effort no doubt, but it was also about two individuals, in different capacities, and their significant contribution to the cause.

It is about two individuals, each of whom scripted his own history alongside the club's triumph.
Tags: Atletico Madrid , Europa League , Diego Simeone , Radamel Falcao , Athletic Bilbao 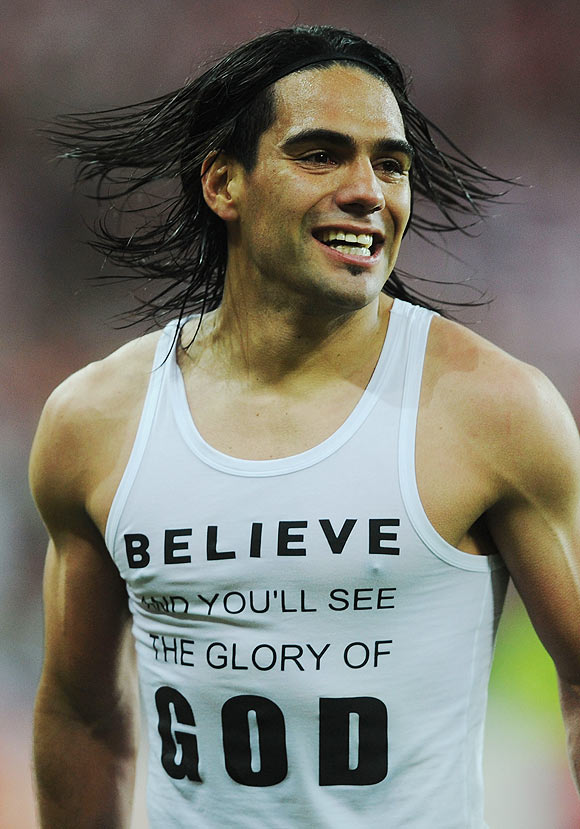 Atletico had to dish out 40 million euros to secure the services of Radamel Falcao, making him the most expensive purchase in the club's history.

The Colombian's form -- he had set a new goal-scoring record of 17 goals (in 14 games), surpassing Jurgen Klinsmann's previous record (15 goals for Bayern Munich in 1996), besides scoring the lone goal in Porto's win over Braga in the Europa League final last year -- commanded the price.

Falcao, though, proved to be a safe investment.

Besides, delivering regularly in the league -- he is the third highest scorer behind Lionel Messi and Cristiano Ronaldo -- the 26-year-old notched up 12 goals in 15 matches to finish as the highest scorer in the Europa League.

Falcao's two spectacular goals in the final against Bilbao not only ensured the title for Atletico but also made him only the second player after Frederic Kanoute (in 2006-07) to score in consecutive UEFA Cup/Europa League finals.

Besides, the Colombian became the first player in history to win successive European titles with two different teams while being the top goal-scorer for either of them. 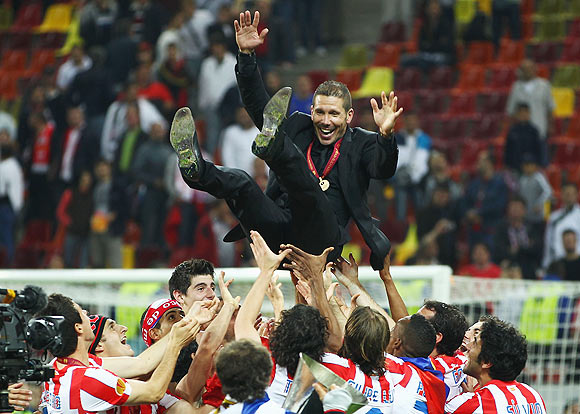 If Falcao made history, his manager was not far behind.

As a player, Diego Simeone was part of the last Atletico team to achieve the domestic double (in 1996).

Asked to take charge of the Madrid club last December, at a time when it was going through a difficult time struggling in the bottom half, the 42-year-old inspired a remarkable turnaround.

Atletico, after a string of impressive performances, moved up to fifth in the league table and still have an outside chance of grabbing the fourth and final Champions League spot.

However, it was their consistent performance in the Europa League that yielded them a second continental title in three years and helped Simeone join a select club.

There have been as many as six examples of people who have won the Champions League both as a player and a coach. However, when it comes to the Europa League, the instances are few and far between.
Tags: Diego Simeone , Atletico , Falcao , Europa League , Madrid 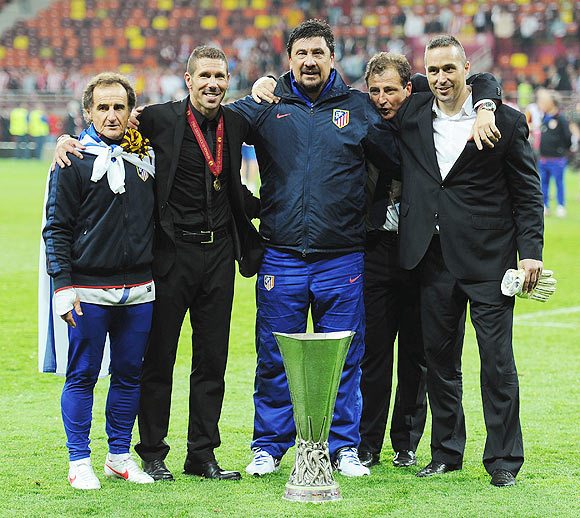 The Argentine had, as a player, won the UEFA Cup (a precursor to current competition) in 1998 in what was the first instance of the competition final being a one-game contest at a neutral stadium (the Parc des Princes).

He was part of Internazionale squad that included the likes of Ronaldo, Ivan Zamorano and Youri Djorkaeff amongst others, one that secured a comfortable 3-0 win over Lazio in an all-Italian final to win what was its third title in eight years in the competition.

Atletico's triumph on Wednesday made the former midfielder only the third person to win the Europa League both as a player and coach. 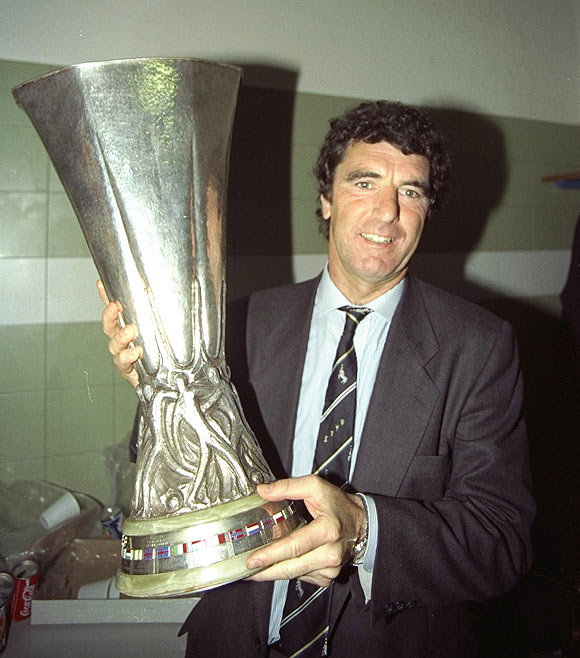 As has been mentioned above, the lone other instance Athletic Bilbao was in a European final was the 1977 UEFA Cup.

They finished second best to Juventus on that occasion, losing out on away goals.

Giovanni Trapattoni's all Italian squad -- Juventus' win that year remains the only triumph for a Serie A side in an international tournament without any foreign players in the first team -- had Dino Zoff in the goal.

In 1990, Zoff won a second UEFA Cup title with Juventus, on this occasion as the coach of the side.

The Turin side beat fellow-Italian club Fiorentina 3-1 (on aggregate) in the final. 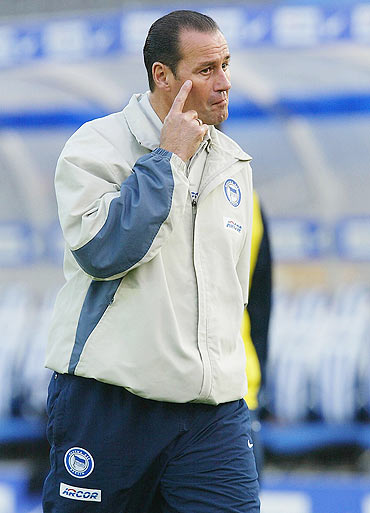 The 1978 final of the UEFA Cup was won by Dutch side PSV Eindhoven, who beat French club SAC Bastia 3-0 on aggregate.

In the 1997, Stevens got himself a second winner's medal, albeit as a coach.

The Dutchman guided German side Schalke 04 to a surprise win (on penalties) over three-time champions Inter Milan, at the time managed by current England manager Roy Hodgson, in what was the last two-legged final in the competition's history.