Sign in  |  Create a Rediffmail account
Rediff.com  » Sports » Mumbai Fighters team up for the big bout at World Series Boxing 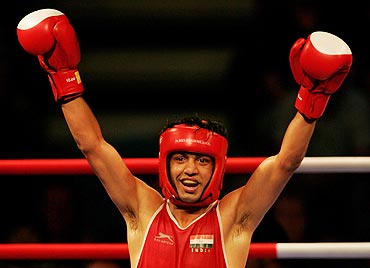 India's lone boxing franchise Mumbai Fighters is ready with its line-up of Indian and international pugilists in a 17-strong squad for the $5million World Series of Boxing commencing November 11 in Mumbai.

Apart from Akhil Kumar, a 2006 Commonwealth Games gold-medallist, Jitender Kumar, a bronze medal winner at the Melbourne CWG, and three-time national champion Diwakar Prasad, the squad consists of ten other Indian boxers and four foreigners, it was announced on Friday.

Notable among other Indians who will parade their wares for Mumbai Fighters are former World Cadet champion Balbir Singh (bantam) of Delhi and 2007 junior world champion Vipin Kumar (bantam).

WSB is a competition wherein boxers will fight without headguards and vests, with professional-style scoring, three judges and one referee and one supervisor.

A WSB match will have five bouts, with each bout consisting of five rounds of three minutes each. The team with most wins from five bouts wins the match.

"We will progress and are fully ready for the championship," said Akhil, who is yet to book a berth for next year's London Olympic Games.

WSB has opened a new avenue for Indian boxing 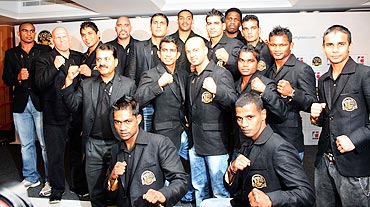 Revealing his fascination for Hindi films, Australian heavyweight boxer Trent Rawlins said, "I love Bollywood and would love to have a stint in it. But, anyway I would dance in the ring (Bollywood-style)," said cricket-loving Australian.

"I am a Christian (believer) and Holyfield is also a Christian like me. The other boxer I admire is (former world professional heavyweight champion) George Foreman," said Australia-born Rawlins who is of mixed parentage (West Indian father and South African mother).

Rawlins said he wanted to come to India and that's why he joined the Mumbai Fighters team after being with the Miami franchise in the inaugural WSB last year.

Team's chief coach Joe Clough said that the squad has been in training for a month now and has shown a 50 percent improvement in skills.

Kishen Narsi, secretary of the AIBA's Technical and Rules Commission, said that the 12-team WSB has opened a new avenue for Indian boxing and boxers.

"Boxing is set to become a big name as a sport throughout the country. The boxers will enhance their skills besides earning good money too," he said.

Krishnan opted out because of prior commitments 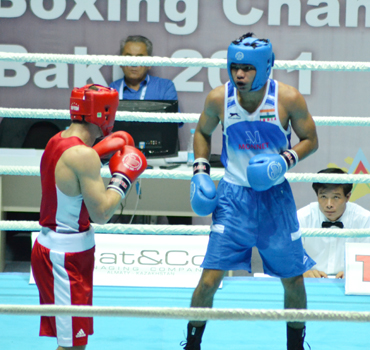 Asked about the absence of star boxer Vijender Singh, Jay Kowli, joint secretary of the Indian Boxing Federation, said that there are only five categories in this championship and Vijender's category fell in between two nominated weight divisions.

He further said that two other top Indian boxers -- Vikas Krishan and Manoj Kumar -- were interested in participating but had to opt out because of their prior commitments.

Team Principal Udit Seth of TransStadia India said that the franchisee aims to spend Rs 50-60 crore over the next five years.

"The boxers will earn between $2000-$6000 per month as per AIBA set standards. We had only 45 days to get together the team. The first three matches will be held at Pune's Balewadi Complex  (Shiv Chhatrapati Sports Complex). We are trying to hold some matches in Mumbai, which currently does not have a top class boxing arena," he said.

Narsi said AIBA was eager to protect the boxers' interest at all costs.

"No franchisee will be allowed to take undue advantage of the boxers," he said.

"The teams will be divided into two groups and the top four from each group will advance into the quarter-finals, followed by the semi-finals and the final which would be held in March, 2012," Narsi said.