Sally Pearson provided a rare bright spot for Australia at the London Games, earning the country's fourth gold medal by edging defending champion Dawn Harper of the United States to win the 100-meter hurdles in an Olympic record 12.35 seconds on Tuesday night.

Under a steady rain, Pearson barely crossed the line ahead of Harper, who was clocked in 12.37. The U.S. also took the bronze, with Kellie Wells finishing in 12.48.

Lolo Jones, the favorite four years ago who fell at the ninth of 10 hurdles, was fourth Tuesday in 12.58.

It took several seconds for the scoreboard at Olympic Stadium to display the final results, with Pearson and Harper both staring and waiting. When Pearson's named appeared first, she let out a yell, then dropped to her knees and fell on her back. 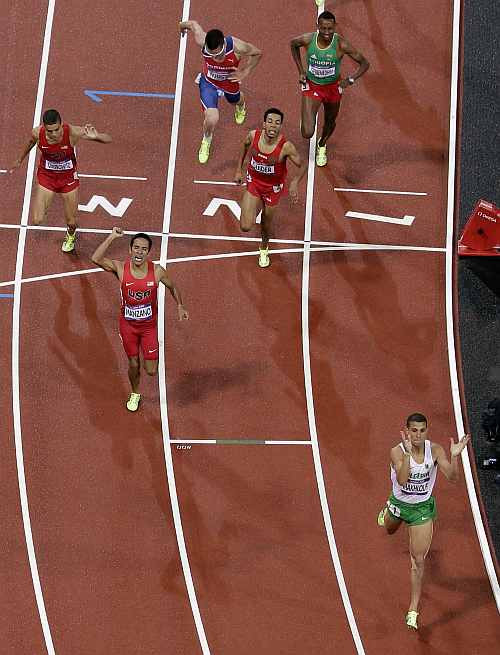 Algeria's Taoufik Makhloufi won the 1,500-meter gold medal at the London Olympics on Tuesday night, only a day after being reinstated to the final.

Makhloufi was disqualified from the games after track and field officials ruled he didn't try hard enough during a heat in the 800. He had already qualified for the 1,500 final at that stage.

But the disqualification was overturned after a medical officer reviewed the evidence, and Makhloufi made his second chance count, winning the 1,500 title in 3 minutes, 34.08 seconds.

Leonel Manzano of the United States took silver in 3:47.79 and Abdalaati Iguider of Morocco earned silver in 3:35.13. 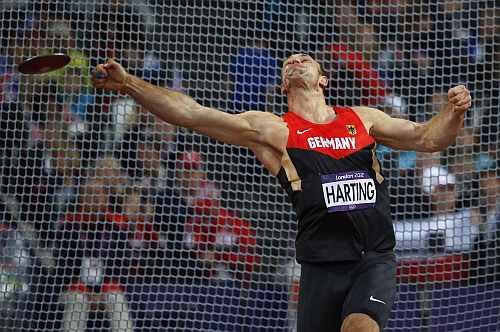 Image: Germany's Robert Harting takes a throw in the men's discus throw final during the athletics in the Olympic Stadium
Photographs: Matt Dunham/AP

Kanter, who ripped off his shirt in celebration, threw 68.27 meters for victory and extended his unbeaten record, which stretches back to August 2010. Ivan Ukhov of Russia won the high jump in cold conditions and a light drizzle at the London Olympics on Tuesday.

Ukhov, who earned a "strong warning" from the IAAF for being drunk during a competition in 2008, cleared 2.38 meters on his first attempt.

He had one failed attempt at 2.40, an Olympic record, before putting his warm clothes back on and starting the celebrations.

The 2010 world indoor champion was the leading performer in 2012 and held his nerve as Erik Kynard, the 21-year-old American from Toledo, Ohio, raised the height late in the competition to try to get ahead of him. Kynard took silver at 2.33 meters.

Three men were tied for bronze: Essa Mutaz Barshim of Qatar, Robert Grabaarz of Britain and Derek Drouin of Canada.

Tags: Ivan Ukhov , Erik Kynard , IAAF , Essa Mutaz Barshim , Derek Drouin
More
Copyright © 2022 The Associated Press. All rights reserved. The information contained in the AP News report may not be published, broadcast, rewritten or redistributed without the prior written authority of The Associated Press.
Write a
Comment
Print this
article