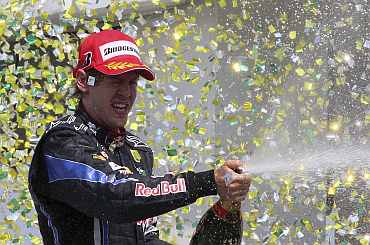 Ferrari's Alonso came third and goes into the final round in Abu Dhabi next week with his lead over Webber cut from 11 points to eight.

Vettel is just 15 behind the Spaniard with McLaren's Lewis Hamilton 24 points off the pace and clinging on to his championship hopes by his fingertips in an unprecedented four-way last-race showdown.

It was the first time since 2004 that the drivers' title was not decided in Brazil.

'It's an incredible day' 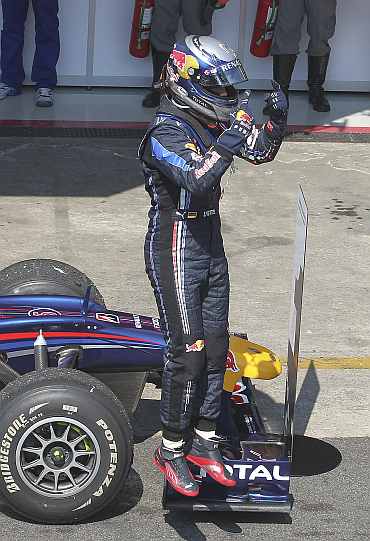 Horner joined his drivers on the podium as Vettel took deep breaths of relief and then joined the Australian, who would have been just a point behind Alonso had he won, in showering the boss with champagne.

"It's an incredible day," said the German, who would have been leading the championship had his car's Renault engine not blown in South Korea last month.

"The car felt fantastic all through the race. I'm very proud, proud of my team and myself," he added.

'I am absolutely stoked for the guys' 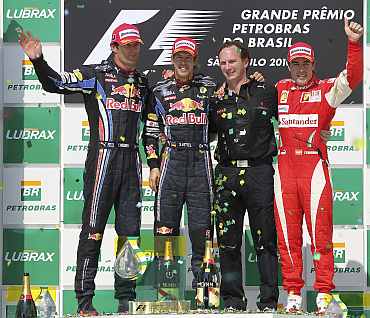 Reigning champion Jenson Button finished fifth, mathematically snuffing out his interest in the championship battle and relinquishing the crown at the circuit where he won it last season.

Vettel, whose fourth win of the season matched Webber's haul, seized the lead at the start from rookie compatriot Nico Hulkenberg who was on pole in a Williams for the first time.

Webber followed him a few corners later and Hulkenberg then obligingly kept both Alonso and Hamilton at bay for several laps while the Red Bulls pulled away.

"I am absolutely stoked, stoked for the guys," said Webber, who had crashed out in the previous race.

"We are still absolutely in the hunt, very good for me to come back after a bad race in Korea," he added.

'It's out of reach, we can't touch them' 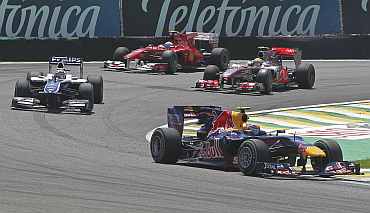 Image: Mark Webber drives ahead during the Brazilian Grand Prix

Alonso, starting fifth and hoping to become Formula One's youngest triple champion, passed Hamilton on the second lap and the stage was set.

"It's out of reach, we can't touch them," Alonso said over the team radio with only 30 of the 71 laps completed.

Even a late safety car period, after Force India's Vitantonio Liuzzi crashed, failed to shake the order up with lapped cars between the leaders.

Alonso did close the gap to Webber in the final laps, with the Australian easing down the revs as his engine showed signs of overheating.

Button, needing a win and the others to fail to score to have any hope of staying in the hunt, was first to pit with a tactical move that lifted him from 11th on the grid to following Hamilton home.