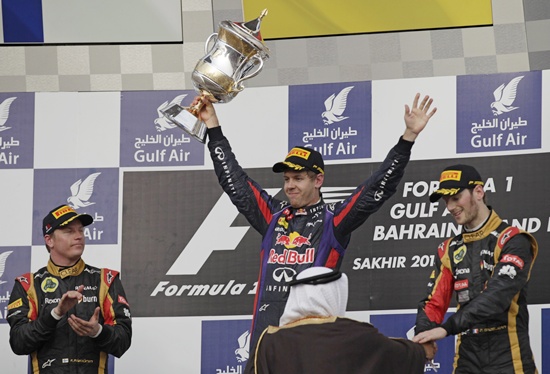 Formula One world champion Sebastian Vettel won the Bahrain Grand for the second year in a row for Red Bull on Sunday to extend his overall lead to 10 points after four races.

In a controversial race that went off without major drama, untroubled by anti-government protests and reported clashes elsewhere in the tiny Gulf kingdom, the German beat Lotus's Kimi Raikkonen by 9.1 seconds.

The win, with Bahrain's Crown Prince Salman al-Khalifa watching, was Vettel's second of the season and 28th of his career.

'It was pretty dominant today' 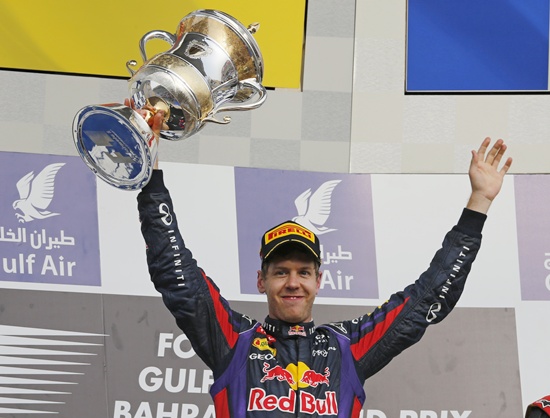 "It was pretty dominant today," said the 25-year-old, who started on the front row and was so far ahead after 25 of the 57 laps that he could pit and still come out in the lead, after swigging the winner's rosewater on the podium.

"Certainly we had more pace than we expected."

France's Romain Grosjean finished third for Lotus, his first podium of the season, to complete the same top three as last year.

Britain's Paul Di Resta equalled his career-best finish, after leading for three laps, with a fine fourth place for Force India after losing third to Grosjean with six laps to go. 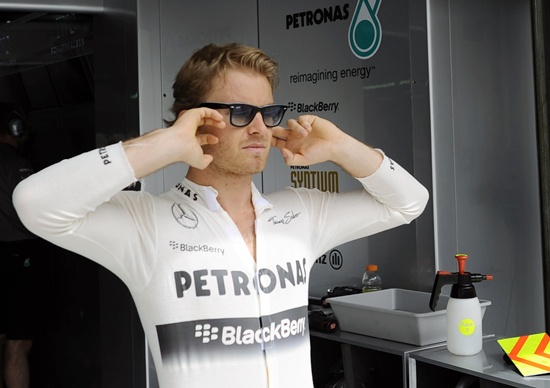 Vettel now has 77 points to 67 for Raikkonen, who chalked up his 21st successive scoring finish and is three races away from equalling the record set by the now-retired Michael Schumacher.

There was bitter disappointment for Mercedes's Nico Rosberg, who started on pole position but finished ninth, and for Ferrari's Fernando Alonso who could have expected to be on the podium but for a mechanical failure.

The Spaniard, now fourth overall with 47 points, finished eighth after having to make an unscheduled pitstop on lap seven -- a lap after coming in for his regular stop -- with his rear-wing DRS system stuck open.

Britain's Lewis Hamilton moved up to third in the standings, on 50 points, after taking fifth place for Mercedes in a thrilling battle with Red Bull's Mark Webber over the closing laps of the Australian's 200th race.

Mexican Sergio Perez was sixth, also passing Webber after a wheel-to-wheel duel with McLaren team mate Jenson Button that saw the newcomer nudge the rear of the 2009 champion's car.

'I could feel that I was able to pull away' 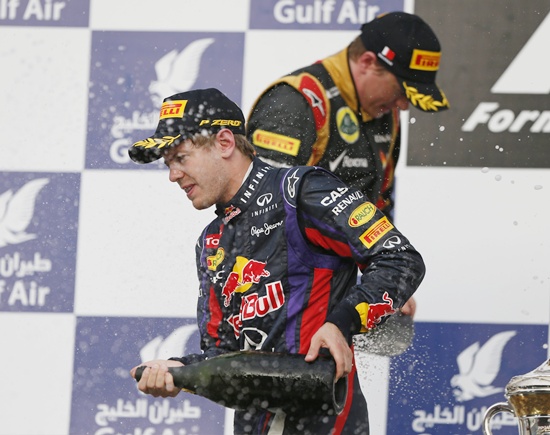 Button urged the team to 'calm him down' but Perez continued to push with Grosjean looming in his mirrors.

Webber finished seventh while Button was 10th, denying Venezuelan Pastor Maldonado a first point of the season for Williams.

Rosberg led from the start but held off Vettel for only two laps, with Alonso swiftly moving up to second before his nightmare in the pits.

"I knew it would be crucial to get in the lead if I could because then you have a little bit of an advantage looking after your tyres and managing the race from there," said Vettel. "I could feel that I was able to pull away."