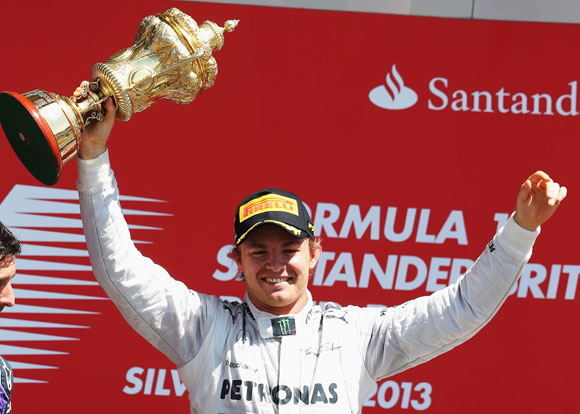 On an afternoon that also saw triple world champion Sebastian Vettel's Red Bull break down while leading. Vettel has 132 points to the Spaniard's 111 after eight of 19 races, with the German's home race at the Nuerburgring next up in a week's time.

"It's a very, very special day," said Rosberg of his second win of the season.
"With Lewis, I feel sorry for all the British fans. It would have been a great race for Lewis here in front of his home crowd. That's racing sometimes," said Rosberg in a podium interview with 1996 champion Damon Hill.
"When Sebastian stopped, I won't lie. I wasn't disappointed by that one. And it was just a great race from then," added the German, who beat Webber by 0.7 seconds after a thrilling last seven laps following the second safety car.
Tags: Lewis Hamilton , Rosberg , Sebastian Vettel , Damon Hill , Webber 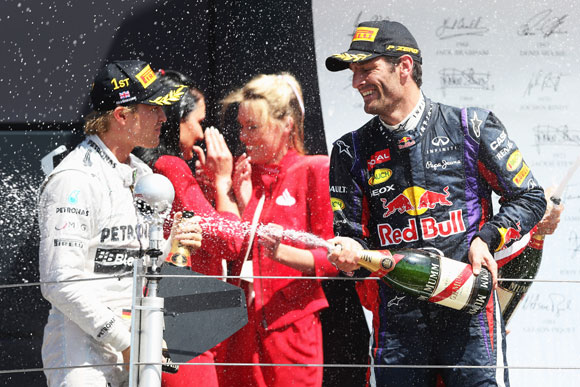 Hamilton had started on pole, chasing his first win for Mercedes since his move from McLaren, and led for the first eight laps until the 2008 world champion's rear left tyre exploded in a flash of flailing rubber.

He nursed his bucking car around the circuit, pitted in 18th place and returned to the track 21st with his hopes of victory wrecked.

It was the start of a mighty drive by the Briton, who ended the race in fourth place.

"Wonderful drive, Lewis," said team principal Ross Brawn over the team radio at the finish. "Sorry it didn't quite work out but well done."

Hamilton's blowout was the first of five rear left failures in a race with two safety car stints - one of them caused by Vettel whose car ground to a halt on the pit straight while he was leading.

"Lost the drive, lost the gearbox," the German shouted over the radio. Australian Mark Webber, who had started on the second row but plunged to 14th at the end of the first lap after a nightmare start, finished second to continue a run of Silverstone podium finishes dating back to 2009.

Red Bull said they found cuts in Vettel's tyre after he had pitted while Mercedes detected the start of delamination in Rosberg's rear left.

"We have seen something new, a different type of problem. We're currently performing our analysis, we've got to go away and understand what has happened today," said Pirelli motorsport director Paul Hembery.

"It was one tyre at the back, left rear, so we need to understand that. It's pointless me adding anything else until we have all the facts," he told reporters. Massa went to the back of the field after he pitted on three tyres and a rim but also fought back to finish sixth, behind Lotus's Kimi Raikkonen.

Raikkonen set a Formula One record for his 25th successive points finish.

Britain's Paul Di Resta was ninth for Force India, after qualifying fifth on Saturday and then being demoted to the back row of the grid when his car was found to be underweight.