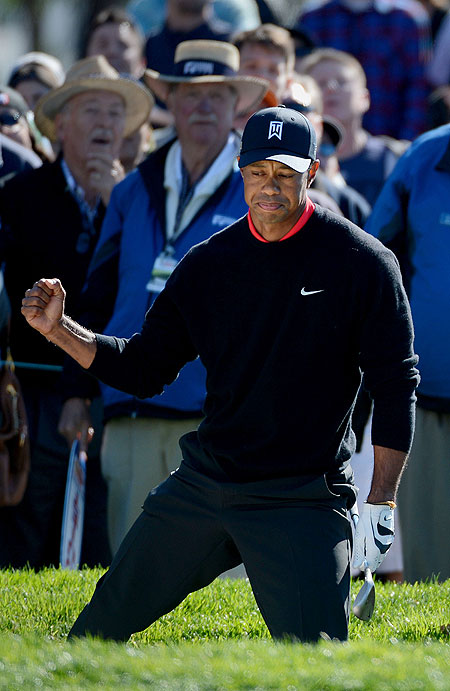 Tiger Woods laid down a timely marker for this season's big events by clinching his 75th PGA Tour title with a four-shot victory at the Farmers Insurance Open on Monday at one of his favourite venues.

Though Woods dropped four shots over his last five holes in increasingly difficult conditions at Torrey Pines, his all-round game for most of the week evoked vivid memories of his glory days in the late 1990s and early 2000s.

The American World No 2 triumphed in his first start on the 2013 PGA Tour, a feat he has previously accomplished six times before going on to win at least one major title in five of those campaigns.

"I'm excited about this year," Woods said after closing with a level-par 72 on the challenging South Course at Torrey Pines, where he won the most recent of his 14 majors at the 2008 US Open.

"I'm excited about what I was able to do last year and win three times, coming from where I came from. Then I felt really good about the things that we're doing and how my game was progressing."
Tags: Torrey Pines , PGA , Woods

'I drove the ball beautifully all week' 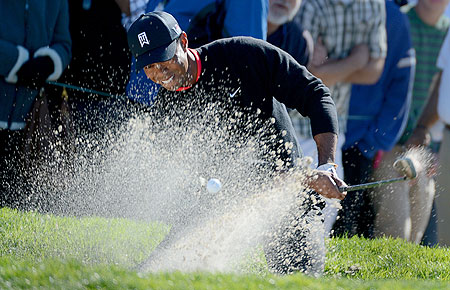 Image: Tiger Woods hits out of the 11th green bunker en route to his -14 under victory during the Final Round at the Farmers Insurance Open at Torrey Pines Golf Course on Monday
Photographs: Donald Miralle/Getty Images

Woods has been working on the fourth swing change of his professional career with coach Sean Foley and together they now appear to be completing the finishing touches.

"I drove the ball beautifully all week, my short game was back to how I know it can be," the 37-year-old Woods said. "My shots that I hit, especially out of these nasty little lies, I hit some really good ones this week.

"You're not going to hit every par-five in two but you need to get up and down, and I did that this week. I'm excited about what I'm doing with Sean and some of the things that I've built."

Asked whether his expectations for this year had changed because of his triumphant display at Torrey Pines, Woods replied: "They're the same. To go out there and win every tournament I play in. That hasn't changed.

"I'm the same out there. First tee shot, I'm all go. I'm trying to shoot the lowest score I possibly can. I'm trying to beat everyone in the field, and that hasn't changed and it won't change. That's the mentality I have."
Tags: Sean Foley , Woods , Torrey Pines

'You've got to be consistently winning' Image: Tiger Woods with the trophy after winning the PGA Tour title at Torrey Pines in California on Monday
Photographs: Donald Miralle/Getty Images

Pressed on whether he was now more focused on trying to depose Northern Ireland's Rory McIlroy from the top of the word rankings, Woods said: "That happens through a product of winning golf tournaments.

"That's how I got there in the first place, that's how he got there. It's winning golf tournaments, being consistent. Your bad weeks are going to be top-10s and when you win, you win. And you've got to be consistently winning.

"That's how I got there. In order for me to get back there, that's what I have to do, and this is a nice start."

'This is a nice way to start the year' Image: Tiger Woods hits off the 8th tee during the Final Round at the Farmers Insurance Open at Torrey Pines Golf Course on Sunday
Photographs: Donald Miralle/Getty Images

Woods won the Farmers Insurance Open for a seventh time and, along with his 2008 U.S. Open success, became the first player on the PGA Tour to triumph at the same venue on eight occasions.

For Woods, winning tournaments rather than accumulating impressive statistics is paramount.

"Does it feel good? Yes," he smiled. "Does it give me confidence? Absolutely. But as far as the other stuff ... I'm just excited about this year. This is a nice way to start the year."
Tags: Sedgefield Country Club , Sam Snead , Starmount Forest Country Club , Woods , PGA
More
Source: