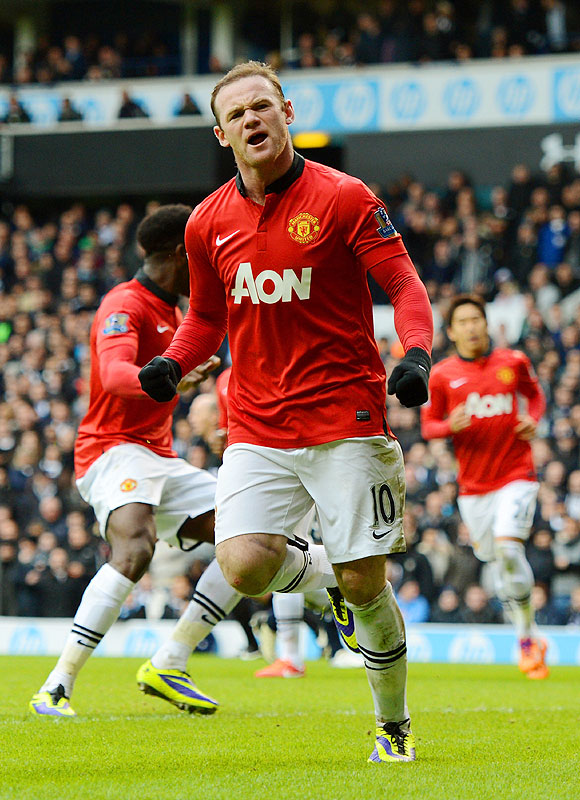 Wayne Rooney equalised twice as Manchester United stretched their unbeaten run to 12 matches with a lively 2-2 draw at Tottenham Hotspur in the Premier League on Sunday.

Tottenham, looking to shake off last weekend's 6-0 mauling at ManchesterCity, took the lead through Kyle Walker's fierce free kick but the defender then gifted his England teammate an equaliser.

A spectacular strike by Sandro restored the home team's lead after the interval before a rash moment by goalkeeper Hugo Lloris handed Rooney the chance to level from the penalty spot.

Champions United remained eighth on 22 points, nine behind leaders Arsenal, with Tottenham a further point back.

Liverpool visit HullCity while Chelsea host Southampton. ManchesterCity can also muscle into the top four with a win at home to SwanseaCity.

Tottenham had not beaten United in 12 previous home attempts but they began the game looking determined to improve that dismal statistic and get their season back on track.

With under-pressure manager Andre Villas-Boas pacing around his technical area they began at a high tempo with Walker and Aaron Lennon impressive down the right flank.

Walker drilled his free kick under the United wall 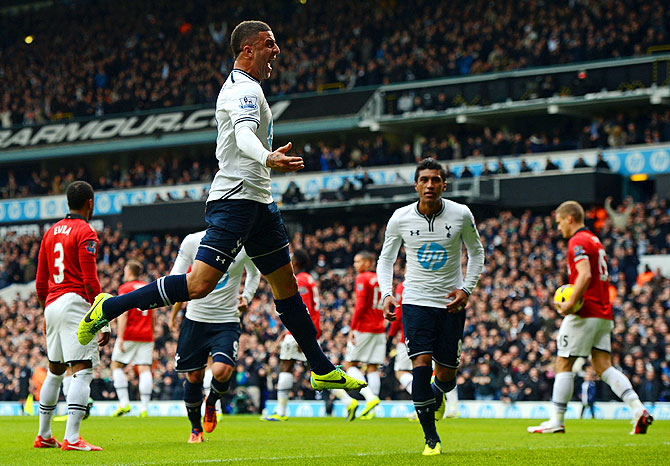 Lennon cut in to test keeper David de Gea with a low shot after 10 minutes.

United, with Shinji Kagawa given a starting berth in central midfield, were nearly gifted a head start when Vlad Chiriches was robbed by Rooney who exchanged passes with Antonio Valencia but then found himself crowded out.

Tottenham took the lead in the 18th minute when Jonny Evans committed a foul on the edge of area and Walker drilled his free kick under the United wall.

The home side were suddenly sweeping forward with relish.

Roberto Soldado was played in by Paulinho but the Spaniard's wild effort cleared the crossbar. De Gea then saved well from Lennon as United wobbled.

Tottenham's momentum was then halted by a terrible mistake from Walker, the England right back diverting the ball across his own area for Rooney to smash United level after 32 minutes.

The Londoners began the second half full of purpose and went back in front with an unstoppable shot from Brazil midfielder Sandro after 54 minutes. 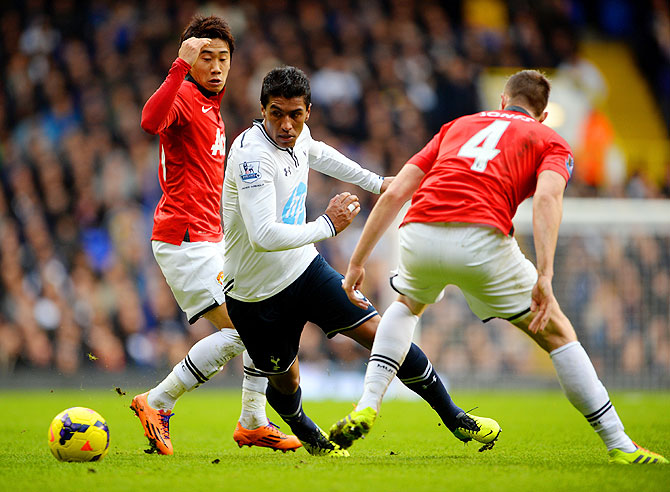 United were given another helping hand three minutes later, Lloris needlessly racing off his line to clip Danny Welbeck's ankle as he veered away from goal.

Rooney made no mistake from the penalty spot, hammering his eighth league goal of the season past Lloris.

With Spurs pressing forward they were almost caught again when Tom Cleverley's raking pass found Welbeck and he charged past a lumbering Michael Dawson on the left but failed to pick out the unmarked Rooney with his cut back.

Neither side seemed content with a draw and Spurs almost went back in front when substitute Andros Townsend was millimetres away from connecting with Walker's teasing low cross.

Later on Sunday second-placed Liverpool and third-placed Chelsea can cut Arsenal's seven-point lead at the top.