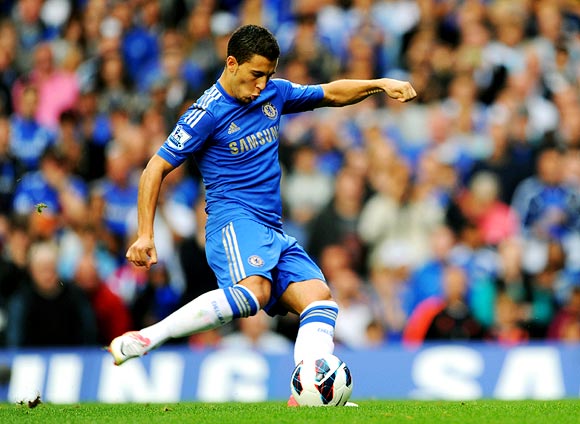 The shade of the shirt may have changed but Robin van Persie remains a red-hot Dutch master after marking his first Manchester United start with a superb goal in a 3-2 Premier League win over Fulham on Saturday.

In-form Eden Hazard also opened his account for Chelsea with a penalty in a 2-0 home victory over Newcastle United which put the European champions top of the pile with three wins from three having played a game more than their rivals.

The tricky Belgian winger, who took the 22nd-minute spot kick after a foul on Fernando Torres and with usual penalty taker Frank Lampard on the bench, then set up the Spain forward for a classy second but the day still belonged to Van Persie. Having swapped the crimson of Arsenal for the red checks of United's new home jersey, the 24 million pound man dug the hosts out of an early hole by netting a trademark volley on 10 minutes to cancel out Damien Duff's well-worked opener.

Right back Rafael soon had the ball in the net again but was foiled by the offside flag only to head in the third with a rare goal on 41 minutes, the rapid comeback witnessed by speed king and big United fan Usain Bolt.

Fulham pulled one back in the second half through a bizarre Nemanja Vidic own goal to prompt a very nervy finish for cavalier United, who had Wayne Rooney carried off on a stretcher with a nasty wound.

"He's got a very bad gash. It looks as if he'll be out for about four weeks," United boss Alex Ferguson told Sky.

Van Persie was a substitute for United's opening 1-0 loss at Everton last Monday but this time it was the turn of expected strike partner Rooney to surprisingly start on the bench just two games into the season. 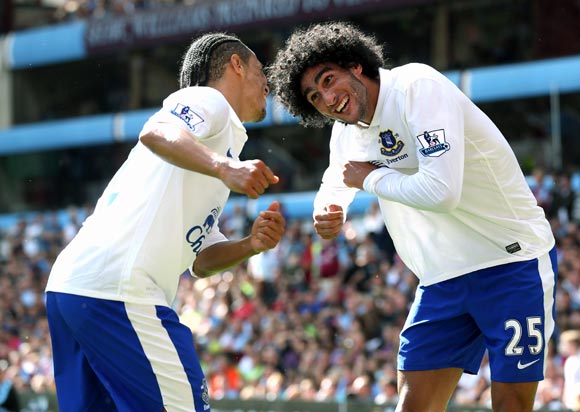 Everton built on Monday's win with a 3-1 romp at Aston Villa thanks in part to another headed goal from Marouane Fellaini, although Villa goalkeeper Shay Given should have done better.

South Africa's Steven Pienaar gave the flying Liverpool side an early lead with a rocket from distance and Nikica Jelavic added to Fellaini's second, putting pressure on new Villa boss Paul Lambert after an opening loss to West Ham United.

Swansea City make it two wins out of two 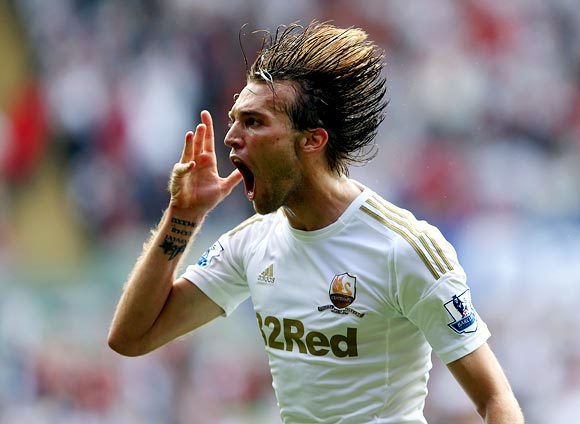 Rampant Swansea City also made it two wins out of two after promoted West Ham gifted them two goals in a 3-0 victory to follow up their 5-0 opener against Queens Park Rangers.

Michael Laudrup's side went ahead on 20 minutes when Angel Rangel's cross deflected in off the body of new West Ham goalkeeper Jussi Jaaskelainen and it was 2-0 soon after when Michu slotted in after an awful James Collins back pass.

Forward Danny Graham knocked in the third after the break while West Ham debutant Matt Jarvis, signed from Wolverhampton Wanderers on Friday, had their best chance with a volley.

QPR recovered slightly from Swansea's mauling to draw 1-1 at Norwich, also thumped 5-0 by Fulham first up, while Sunderland's game with promoted Reading was postponed before kickoff because of a waterlogged pitch. 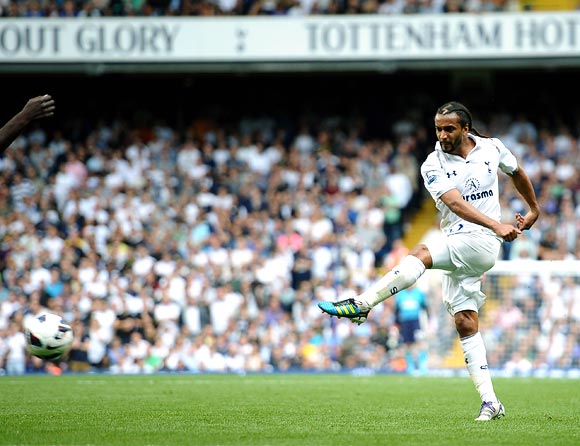 Promoted Southampton lost again after a 2-0 home defeat by Wigan, whose winner came from Arouna Kone, the Ivorian who is the replacement for new Chelsea winger Victor Moses.

Tottenham Hotspur, beaten at Newcastle in coach Andre Villas-Boas's debut last week, were held 1-1 at home by a West Bromwich Albion side who scored a late leveller through James Morrison having been buoyed by an opening win over Liverpool.

Brendan Rodgers and Liverpool face a tough task in making amends for that surprise 3-0 reverse when the former Swansea boss welcomes champions Manchester City on Sunday after Arsenal play at bogey side Stoke City.