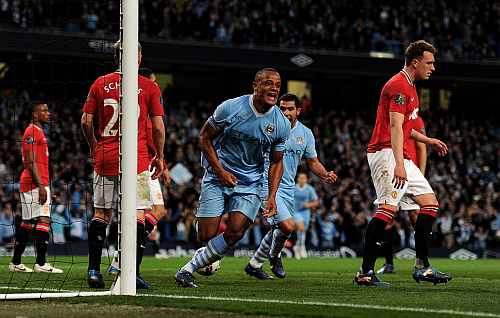 Manchester City closed in on their first top flight title in 44 years by beating Manchester United 1-0 on Monday after doing what their rivals have done for years - keeping their nerve when all seemed lost.

City captain Vincent Kompany scored the winner with a header from a corner at the end of the first half to cap a remarkable turnaround in the title race as they moved top of the table on goal difference with two games to play.

The win for Roberto Mancini's team, who were never really threatened by a United side that came looking for a point and left empty handed, capped a remarkable month for a City side displaying all the hallmarks of their illustrious neighbours.

Premier League defeats by Swansea and Arsenal and a draw at Stoke looked like derailing big-spending City's title drive, with United winning eight successive games almost at will, but Mancini's determined players refused to give up.

Title race far from over 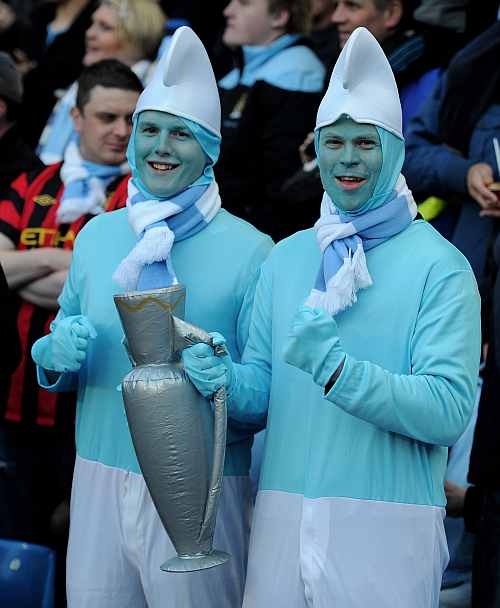 United's never-say-die attitude was at the heart of their 12 titles under Alex Ferguson in the Premier League era, but the champions could find no way back in this match.

Kompany's strike was the only goal of a fraught, passionate and at times ragged and wild derby that distilled all the unpredictability of a remarkable season into 90 minutes of a match that swung first the way of United and then City who finished the stronger and were deserved winners.

Both teams have 83 points but City have moved back to the top of the table on goal difference and, although they have the harder games left, Mancini's side now hold all the cards.

Asked who were now favourites for the title, Mancini once again told reporters: "United. They have the easier games, against Swansea and Sunderland, while we have to play Newcastle United, who are going for the Champions League, and Queens Park Rangers who are going against relegation.

"We are at the top now, but it can change after the next two games," he added.

However, City's dashing Italian coach did concede that winning the title was actually a possibility for his side too, "yes, it is, that's true," he smiled broadly.

Tevez has been in instrumental in City's rise 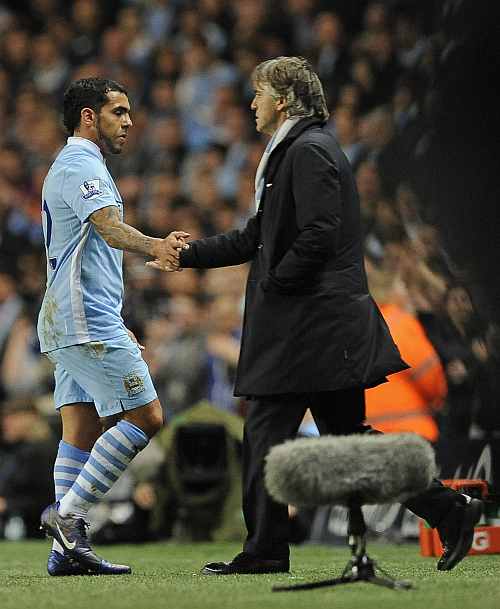 Image: Manchester City's Tevez shakes hands with manager Mancini as he is substituted during their Premier League match at the Etihad stadium
Photographs: Nigel Roddis/REUTERS

The match was almost a mirror image of the season, with United on top at first before a period of City supremacy, United coming back and City finishing stronger at the end.

In the league, United were the pacesetters for most of the first two months, before City led the race for five months until United regained the lead in the middle of March.

While the final act in the drama is still to be played out in the next two weeks, United could still finish on top of the pile for the 20th time in their history as City do have the trickier games to play.

But, as it stands, Mancini's side have the momentum to carry them all the way to a first top flight title since 1968.

They regained it on April 11 when Carlos Tevez, having made up with Mancini following their infamous falling out in September when Tevez refused to warm up as a substitute for a Champions League match in Munich, was restored to the starting lineup in the 4-0 win over West Bromwich Albion and scored.

City have since beaten Norwich City 6-1, Wolverhampton Wanderers 2-0 and now United while Ferguson's side have dropped points to Wigan Athletic and Everton and fallen back to second place for the first time since early March.

Ferguson set them up to play a holding 4-5-1 formation at the Etihad as he has so often done in away Champions League matches with Rooney as the lone striker.

The tactic worked at first as United dominated the early stages, at least by holding City at bay, without either team creating any real scoring chances. 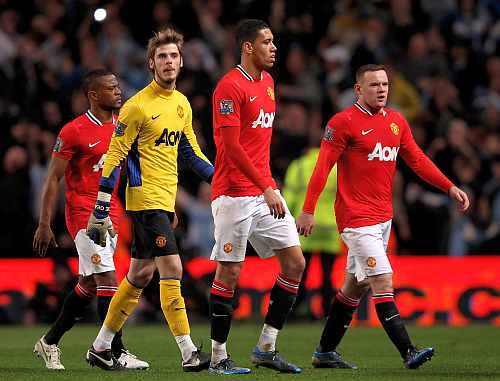 But United began to unravel with Nani giving the ball away too easily and the experienced campaigners Paul Scholes and Ryan Giggs lacking any real influence.

City's industrious midfield of David Silva, Gareth Barry and Yaya Toure began to find chinks in United's defence too with Sergio Aguero, watched by his father-in-law Maradona, and fellow Argentine Tevez beginning to get a whiff of a goal.

Last season United's outstanding centre back Nemanja Vidic, who has been out since December with a cruciate ligament injury, was stopping attempts like that. Those are the margins between success and failure.

Ferguson did pep up his attack in the second half when he introduced Danny Welbeck for the ineffective Ji-sung Park, but Rooney had little impact and seemed to spend most of the time arguing with the referee and showing his frustration with his team mates.

United finally put City under some pressure late in the game but to no real damaging effect and the home side rode out the final minutes to complete a league double over their rivals after their remarkable 6-1 win at Old Trafford in October.

They now seem well placed to finish the roller-coaster ride of their season on a high as well.