Sign in  |  Create a Rediffmail account
Rediff.com  » Sports » Man City pump up the volume with 6-1 rout at United 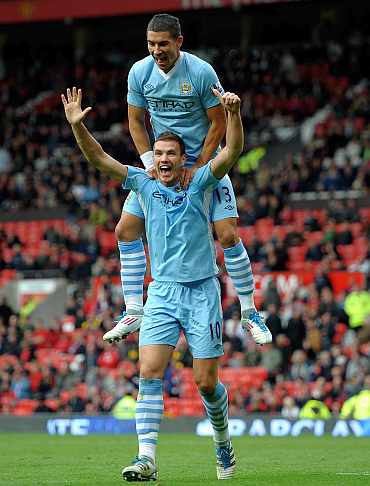 Manchester City ransacked fortress Old Trafford on Sunday with a 6-1 demolition of Manchester United that put them clear at the top of the Premier League and erased any doubts about their ability to snatch the title away from their illustrious rivals.

Having averaged more than three goals a game in an unbeaten start to the Premier League season, City's expensively assembled side continued the goal flow to carve United apart and inflict a first home defeat on Alex Ferguson's side for 18 months.

Doubles from Mario Balotelli and Edin Dzeko, along with goals by David Silva and Sergio Aguero inflicted a heaviest ever Premier League defeat on United, who played most of the second half with 10 men after defender Jonny Evans' sending off.

"I'm still gobsmacked," City defender Micah Richards told Sky Sports, summing up the mood at a surreal Old Trafford where many United fans had left early to the loud accompaniment of the visiting supporters' rendition of "Blue Moon". 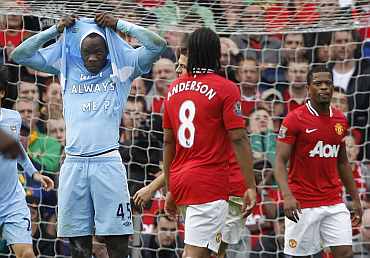 This Manchester derby had always been about much more than local rivalry and City's ambitions to become top dogs in the northern city, England and Europe were broadcast loud and clear as they completely dismantled a team that won a record 19th league title last season.

By the end it could have been even more embarrassing for United who have enjoyed decades of dominance over City since the sky blue half of Manchester last won the title in 1968.

Having been taunted by United's jibes that they had been taught a "footballing lesson" after squandering a two-goal lead to lose 3-2 in the season-opening Community Shield, City found the boot was firmly on the other foot two months later.

They opened the scoring in the 22nd minute with a sweet first-time strike from the edge of the area by Balotelli before United's task of catching up was made even harder when Evans was sent off two minutes after the break.

Hardly celebrating, Balotelli, who has courted controversy with a "bad boy" reputation on and off the pitch, slipped his shirt over his head after scoring to reveal a T-shirt with the words "Why always me?". 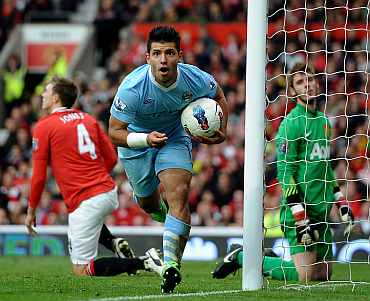 To underline the point, he put his side further ahead on the hour by turning in James Milner's cross ball at the far post.

The visitors, once dismissed as "noisy neighbours" by the Old Trafford hierarchy, rubbed salt in United's wounds eight minutes later when Aguero notched his ninth league goal of the season, slotting in Richards' low cross as the Old Trafford fortress collapsed like a sandcastle in a sea of blue.

United midfielder Darren Fletcher grabbed an 80th-minute consolation goal before City substitute Dzeko got his knee to a Joleon Lescott pull-back after a corner.

Silva, instrumental in so many of City's moves forward, finally got his name on the scoresheet in stoppage time before sending Dzeko clear with an exquisite pass to add another in the third minute of added time. It was City's biggest win at Old Trafford since they won 5-0 there in 1955 while United tasted defeat at home for the first time since losing to Chelsea in April 2010.

The last time City won 6-1 at Old Trafford, in 1926, they were relegated at the end of the season but the days of the club's well-documented self-destructive tendencies finally look to be a thing of the past.

A stunned United manager Alex Ferguson, whose side suffered a first defeat of the season, could not believe the scoreline. "They were attacking three against two, it was crazy, crazy football," he told Sky Sports.

"It was a bad day, no doubt about that. We will come back from that. I know by January we will be OK, we normally get our show on the road.

"I feel disappointed. I don't think I've ever lost a game 6-1 in my life. I've got great experience to handle it now," he added. 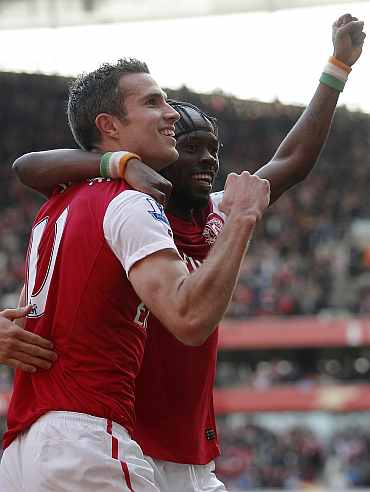 Robin van Persie underlined his importance to Arsenal by coming off the bench to fire his side to a 3-1 win over Stoke. Van Persie was introduced midway through the second half and netted shortly afterwards.

His second strike came seven minutes from full-time to make sure of a third win for Wenger's team within a week and lift Arsenal into seventh place.

Wenger's side had struggled to create chances without Van Persie leading the attack. Marouane Chamakh stepped in for Van Persie and the closest he came in the early stages was heading wide from Mikel Arteta's corner.

Stoke, however, showed their battling qualities to get back in the game, although Dean Whitehead's efforts earned a yellow card when he crashed into Arteta for a second time in the match.

They were level in the 34th minute when Arsenal showed their familiar weakness of failing to deal with set-pieces, although they were upset at Laurent Koscielny being penalised for a foul on Crouch. 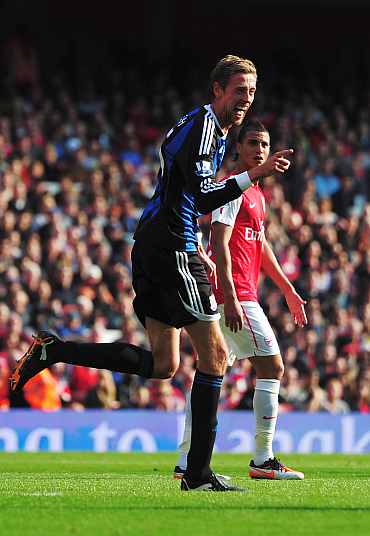 Glenn Whelan floated the resulting free-kick down the right channel, Shawcross headed across goal and, after a goalmouth scramble, Crouch flicked the ball in after Jonathan Walters had nodded towards goal.

It was Crouch's third goal in five matches and it led to Arsenal fans growing restless.

The hosts thought they should have had a penalty straight after the equaliser when Andy Wilkinson appeared to wrestle with Chamakh, but referee Lee Mason waved play on.

Wilkinson was given a yellow card in the second half when he fouled Walcott but chances were proving difficult to create, with Stoke bringing on Salif Diao for Rory Delap to give a more defensive look to their midfield. 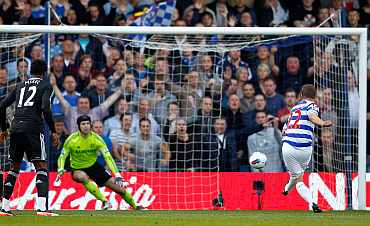 Chelsea completely lost their discipline as two sending offs, seven yellow cards and a penalty handed QPR a 1-0 win over their arch-rivals, first for 16 years.

Jose Bosingwa and Didier Drogba both saw red in the Barclays Premier League clash at Loftus Road, while Ashley Cole also picked up a suspension for his fifth booking of the season.

The rot set in when David Luiz needlessly conceded an eighth-minute penalty which Heidar Helguson scored, but the nine men wasted more than one chance to level, most notably when Nicolas Anelka headed straight at Paddy Kenny.