The Indian women's recurve team of Deepika Kumari, Laishram Bombayla Devi and Chekrovolu Swuro settled for a silver medal after being tamed by Korea in the Archery World Cup Stage I in Shanghai on Sunday.

The women's team's performance was the only saving grace for the Indians as the fancied men's team of Tarundeep Rai, Jayanta Talukdar and Rahul Banerjee had crashed out in the quarters on Saturday.

India did not pose any challenge to their Korean counterparts going down 212-222 in a one-sided affair.

Swuro and Deepika featured in the women's individual events but only to make first-round exit.

While Swuro went down to Miranda Leek of USA 3-7, Deepika was ousted by Yuting Fang by an identical scoreline.

There will be a ray of hope on Monday when Gagandeep Kaur, Parveena and Jyothi Surekha fight it out against their Italian opponents in the bronze playoff of the women's compound section. 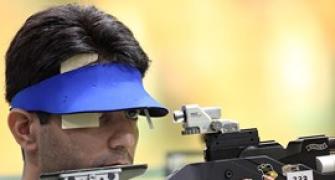