Images from the Champions League matches played across Europe on Wednesday. 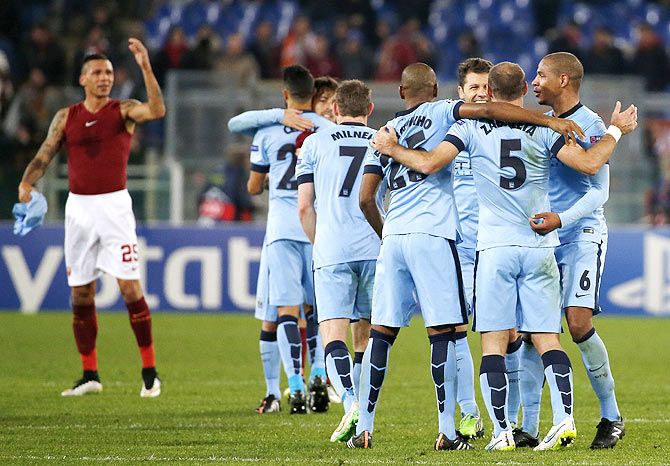 Manchester City players celebrate at the end of their Champions League Group E match against AS Roma at the Olympic stadium in Rome on Wednesday. Photograph: Alessandro Bianchi/Reuters

Manchester City concluded one of the great Champions League Houdini acts on Wednesday as they qualified for the knockout stages with goals from Samir Nasri and Pablo Zabaleta sinking Roma 2-0 to eliminate the Italians at the Stadio Olimpico.

The Frenchman's 60th-minute thunderbolt, before he laid on a second for the Argentine in the 86th minute, ensured the English champions did not suffer another frustrating early exit in Group E.

City's great escape into the last 16 seemed unthinkable when they trailed in their penultimate game at home to Bayern Munich with just five minutes remaining before Sergio Aguero completed his famous hat-trick.

'We have resolve, character and fantastic players' 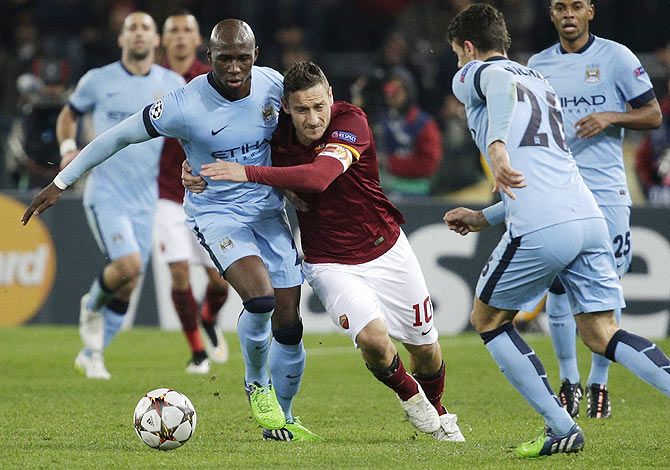 Bayern Munich in a fevered atmosphere in Rome and even without their injured totem Aguero, Manuel Pellegrini's men produced a performance full of resolve.

Nasri, given too much space on the edge of the box, hammered a glorious 20-metre shot which cannoned off the post and into the net, and City defended manfully before Nasri freed the rampaging Zabaleta to score his first Champions League goal.

"People wrote us off without our key players (like Aguero and Vincent Kompany) but we're a strong unit, we believed in what we could do," City keeper Joe Hart told Sky Sports.

"You don't win two Premier League titles in three years easily. We have resolve, character and fantastic players. Add that together and you've got a chance." 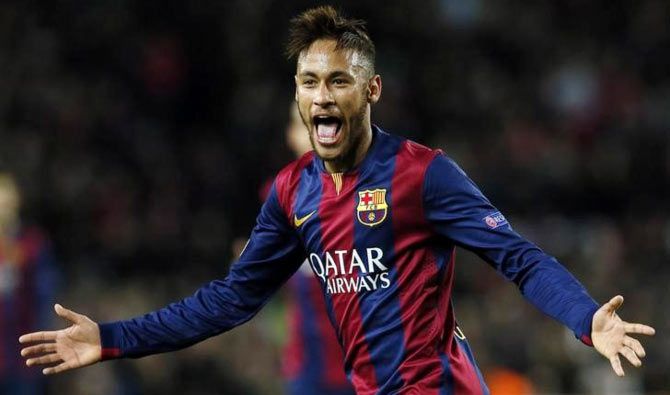 Neymar scored a spectacular goal as Barcelona came from behind to beat Paris St Germain 3-1 in their Champions League showdown for top spot in Group F on Wednesday.

And coach, Luis Enrique, was delighted to have ended PSG's unbeaten run in all competitions this season despite being forced to adopt a new system in a landmark Champions League triumph for the Catalans.

Former Barcelona striker Zlatan Ibrahimovic put the French side ahead after 15 minutes on Wednesday before the home side turned the Group F decider around with goals from Lionel Messi, Neymar and Luis Suarez.

The victory ensured that Barca topped the standings on 15 points, two ahead of PSG, and set a new record of 13 group wins in the competition, one more than arch rivals Real Madrid.

It was still scrappy at times from Barca, though, who began with an unfamiliar three-man defence and PSG had a number of chances to add more goals, especially in the second half before Suarez struck on 77 minutes to seal victory for the hosts.

'We created chances and beat a strong side to finish top' 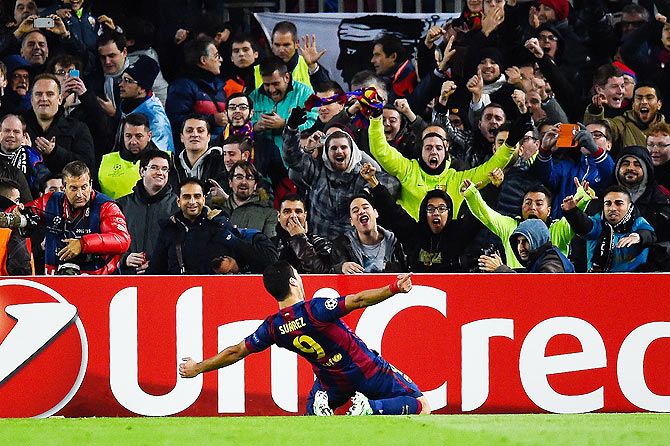 "We were without a key player in (suspended fullback) Dani Alves and we went out with a game plan to cause problems for an opponent that defended deeply and looked to counter-attack.

"It was made even more complicated by the fact they scored first but we turned the game around with some good football. We played the system that we thought would do the most damage.

"We created chances and beat a strong side to finish top of the group, so it was a good night for us."

PSG coach Laurent Blanc felt that Barca's system, which also saw them start with Pedro and Neymar on the wings, actually helped the French team.

"We obviously expected Barca to play a certain way and I don't think the defeat was caused because Barca were so dangerous but more by our own mistakes in defence and attack," Blanc admitted.

"I actually think that their style caused problems for themselves rather than us. There was a lot of space between the three players at the back which we could have exploited more.

"We had chances to equalise but we didn't quite manage it and when you are up against players like Messi, Neymar and (Andres) Iniesta, they will punish you." 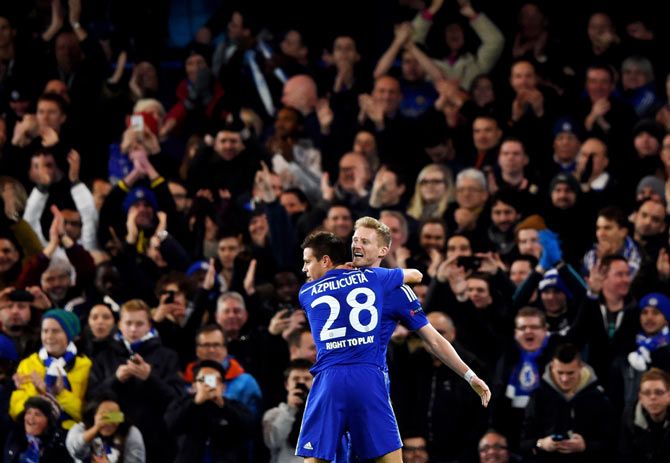 Chelsea gave a helping hand to a former hero on Wednesday by rounding off the Champions League group stage with a 3-1 victory over Sporting which sent the Portuguese side packing and opened the door for Schalke 04 to reach the last 16.

The English side finished comfortably clear at the top of Group G after a Cesc Fabregas penalty and a rasping strike from Andre Schuerrle set them on their way and John Obi Mikel rounded off the scoring after Jonathan Silva had given Sporting hope.

The result proved a boon to Chelsea's former Champions League-winning coach Roberto Di Matteo whose Schalke side clinched the runners-up spot after a 1-0 win over Maribor that left them on eight points, one clear of Sporting.

Chelsea, who dominated Wednesday's match, finished with 14 points, having won four of their six group games.

Chelsea's place in the last 16 was assured long before kickoff, as was their status as group winners, after they thrashed Schalke 5-0 in their last game.

But after their unbeaten start to the season was halted in a Premier League defeat at Newcastle United on Saturday, there was no question of Jose Mourinho taking it easy or picking an entirely second-string side. 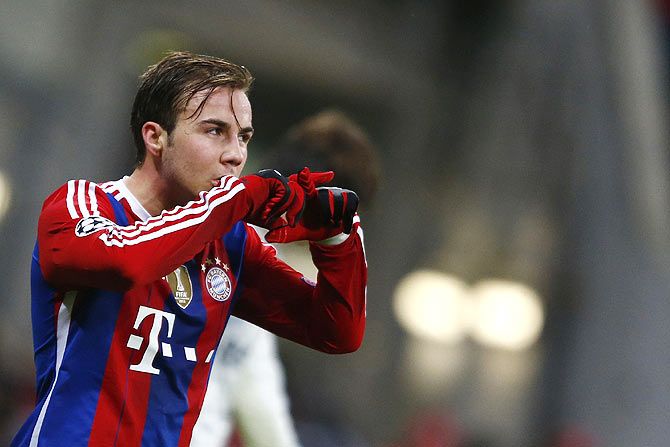 Already qualified Bayern Munich beat CSKA Moscow 3-0 with another dominant performance on Wednesday to complete their fifth win in six Champions League Group E games and leave the Russians bottom of the table and out of Europe.

A new-look Bayern side featured teenagers Gianluca Gaudino and Pierre Hojbjerg alongside Bastian Schweinsteiger, making his first start of the season after a lengthy injury absence.

With Xabi Alonso and Arjen Robben on the bench, Bayern, who had secured top spot in Group E with two games to spare, never hit top form.

Thomas Mueller scored his 24th in the comeptition from the spot in the 18th minute to become Bayern's record Champions League goalscorer ahead of Mario Gomez.

'I am proud of the team' 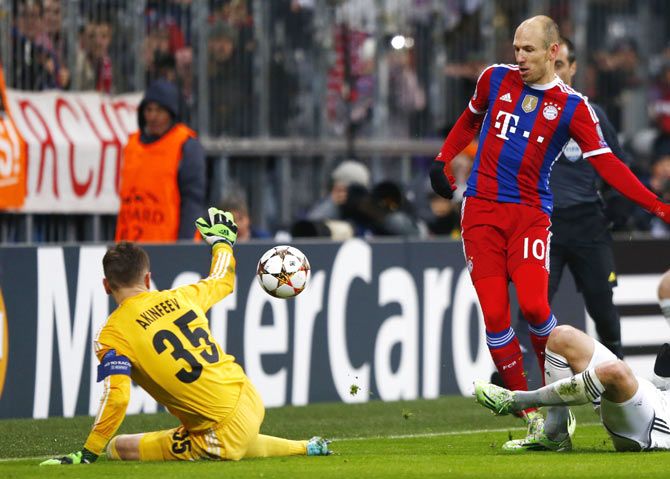 Sebastian Rode headed in his first Champions League goal following a fine move in the 84th before Mario Goetze added another in the 90th.

The result leaves Bayern top with 15 points, a club record, and CSKA Moscow, who had keeper Igor Akinfeev to thank for keeping the score respectable, bottom on five. Manchester City snatched second spot with a 2-0 victory at Roma.

"I am proud of the team," said Bayern coach Pep Guardiola, who made five changes to the side that beat Bayer Leverkusen four days ago and started with striker Robert Lewandowski and Rafinha on the bench.

"We were outstanding and in every game played better than each of our group opponents."

Schalke squeeze into last 16 after 1-0 win at Maribor 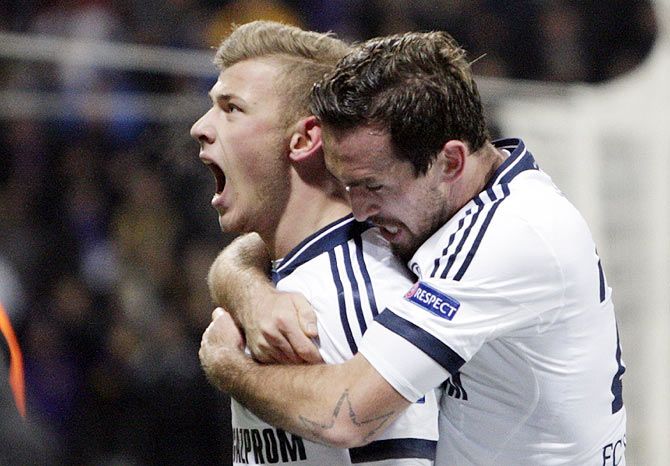 An opportunist goal by 19-year old substitute Max Meyer gave Schalke 04 a 1-0 win at Maribor in their Champions League Group G match on Wednesday and propelled them into the knockout stage of the competition.

The result lifted Schalke above Sporting Lisbon into second place after the Portuguese side, needing a draw at Chelsea to progress into the last 16, were beaten 3-1 by the group winners.

Schalke dominated possession in the first half but Maribor, roared on by their 12,000 home fans who lit flares midway through the opening period, looked more dangerous on the break.

The home side came desperately close in the 23rd minute, when Schalke’s Japanese right back Atsuto Uchida cleared a Zeljko Filipovic header off the line and blocked the follow-up from Brazilian striker Tavares. 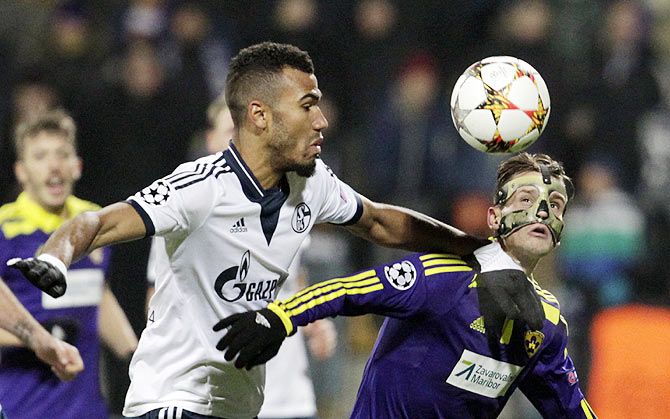 The scare spurred the visitors into action and Dutchman Klaas-Jan Huntelaar blazed his shot wildly over the bar after turning his marker superbly on the halfway line and racing through on goal.

Huntelaar and strike partner Eric Choupo-Moting were starved of service up front with Maribor’s packed midfield cutting off the supply routes and their back four holding firm.

But the German side missed a gilt-edged chance shortly after halftime when Huntelaar’s close-range shot hit the inside of the far post and Aleksandar Rajcevic cleared the ball off the line. Schalke piled the pressure and punished the hosts as their guard dropped, allowing Meyer to slip into the penalty box and sweep the ball into an empty net from 12 metres after Handanovic’s calamitous error.

The Slovenians, who needed a win to avoid finishing bottom and grab the consolation prize of carrying on in the Europa League, threw men forward in the closing stages but failed to trouble Schalke. 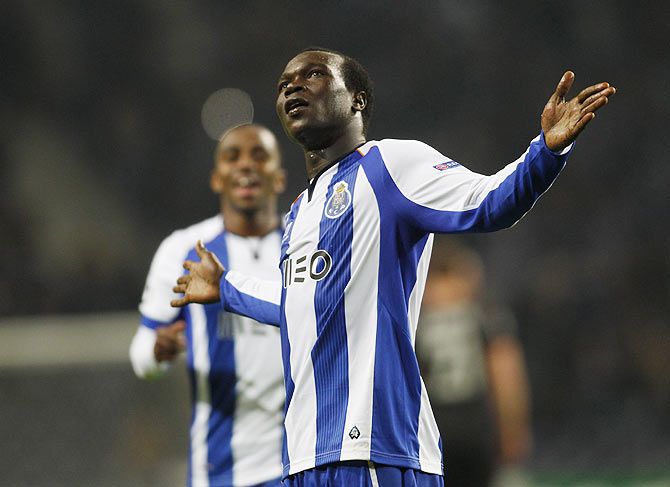 Porto completed the Champions League group stage with an unbeaten record after a stunning late strike from Vincent Aboubakar gave them a 1-1 draw at home to Shakhtar Donetsk on Wednesday.

Shakhtar went ahead five minutes after halftime when Taras Stepanenko met Bernard's outswinging corner with a thumping header which went straight into the top corner.

Porto appeared to have their minds on Sunday's league match against arch-rivals Benfica until the 87th minute when Cameroon forward Aboubakar collected a loose ball in midfield and, despite being partly off-balance, rifled home an unstoppable shot from 25 metres. 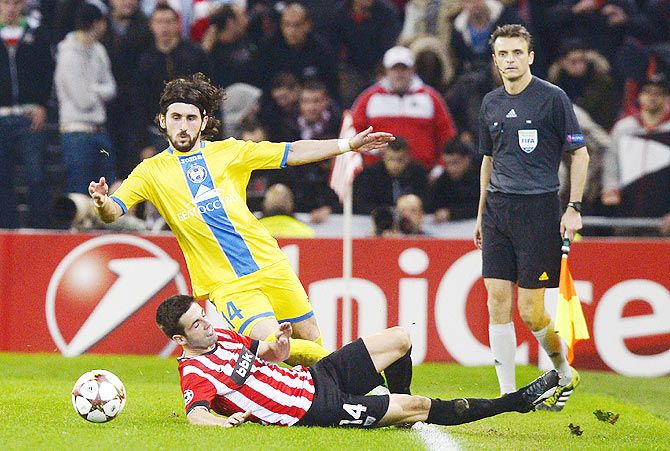 Athletic Bilbao secured a berth in the Europa League when Mikel San Jose and Markel Susaeta struck in a 2-0 win for the Basque club at home to BATE Borisov in Champions League Group H on Wednesday.

Bilbao squandered a host of chances at their San Mames arena before finally making the breakthrough against the Belarussian champions in the 47th minute when San Jose swept the ball home from a Susaeta corner.

Susaeta made it 2-0 two minutes from time after fine work from substitute Borja Viguera.

Both teams were already eliminated from the Champions League and Bilbao needed only a draw to make sure of third spot behind group winners Porto and second-placed Shakhtar Donetsk.

BATE head home empty handed having set a record for goals conceded in the group phase of Europe's elite club competition of 24 following drubbings at Porto and home and away against Shakhtar.

After finishing fourth in La Liga last season, Bilbao have been on erratic form this term and are 10th in Spain's top flight after 14 matches.

Runners-up to Atletico Madrid in the 2012 Europa League, they finished fourth in their group in their only previous Champions League campaign in 1998-99.

The draw for the last 32 of the Europa League is on Monday. 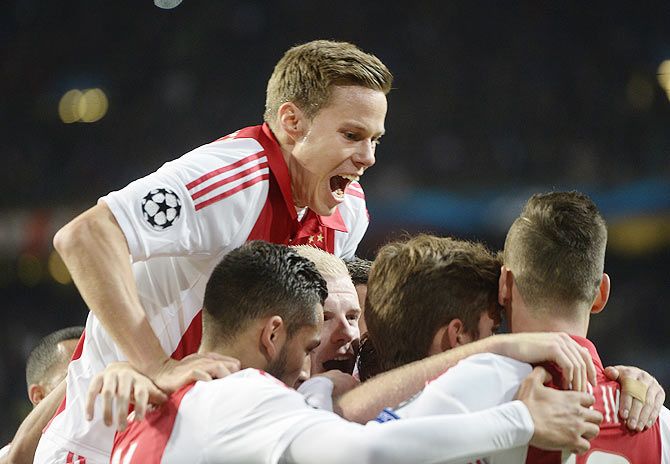 Ajax Amsterdam secured a spot in the Europa League after a convincing 4-0 Champions League victory over APOEL Nicosia on Wednesday ensured they finished ahead of the Cypriot side in Group F.

Lasse Schoene converted a penalty just before halftime, after Arkadiusz Milik was brought down in the area by Marios Antoniades, and the Dane netted his second with a simple finish five minutes after the interval.

APOEL needed to win in order to overtake third place Ajax but apart from a few isolated attacks, most of the match was played in the visitors' half.

Ajax extended their lead through Davy Klaassen's header on 53 minutes and Milik's strike rounded off the scoring with 16 minutes to play.

© Copyright 2022 Reuters Limited. All rights reserved. Republication or redistribution of Reuters content, including by framing or similar means, is expressly prohibited without the prior written consent of Reuters. Reuters shall not be liable for any errors or delays in the content, or for any actions taken in reliance thereon.
Related News: Maribor, Reuters, Shakhtar Donetsk, Paris St Germain, APOEL Nicosia
COMMENT
Print this article 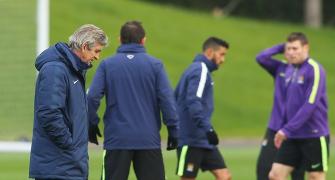 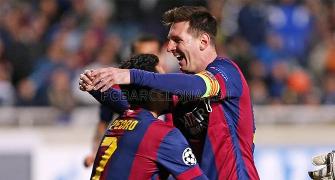 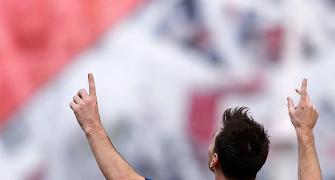 La Liga: After records, Messi can focus on silverware 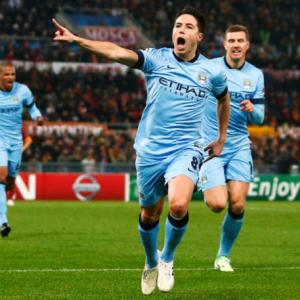 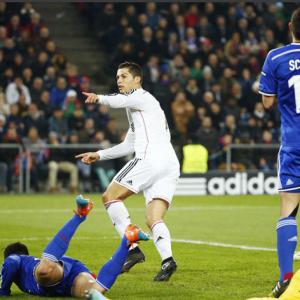