Sunderland and West Bromwich Albion stayed in touch with the Premier League leaders with solid home wins over West Ham United and Newcastle United on Sunday.

Sunderland beat West Ham 1-0 to go seventh on 23 points and leave their opponents bottom of the league, while West Brom overcame Newcastle 3-1 to climb to the heady heights of eighth on 22.

Arsenal lead the standings on 32 points having beaten Fulham 2-1 on Saturday. Manchester United, whose game at Blackpool was frozen off, are second on 31, a point ahead of champions Chelsea whose poor run continued with a 1-1 home draw with Everton.

Sunderland and Manchester United are the only teams yet to lose at home this season and Steve Bruce's side were just about worth victory in a tight game.

The well-made goal came after 34 minutes when Nedum Onuoha sent Asamoah Gyan clear and the Ghanaian slid the ball into the path of Jordan Henderson who sidefooted it in from 12 metres.

Gyan hit the bar with a clever chip moments later but there were few other clear chances.

After a flat opening half-hour at The Hawthorns Somen Tchoyi fashioned West Brom's opener with neat control on the edge of the box and curled the ball beyond Tim Krul after 32 minutes.

The second came after 71 when Newcastle's Danny Guthrie slipped to present Peter Odemwingie with a clear run on goal.

The Nigeria striker, a deadline-day signing from Lokomotiv Moscow, got the third a minute from the end, running on to a simple long ball by Marek Cechl and rounding the keeper.

West Brom are the classic "yo-yo club", regularly swinging from Premier League relegation to Championship promotion, but they will harbour genuine hopes of survival this season.

In recent weeks they have lost to Stoke City, Blackpool and Wigan Athletic but they have won at Arsenal and Everton and drawn at Manchester United.

Newcastle have been similarly inconsistent. A season that has brought a 6-0 win over Aston Villa, a 5-1 thrashing of Sunderland, victory at Arsenal and last week's draw with Chelsea also featured a 5-1 loss at Bolton Wanderers and home defeats by Stoke, Blackburn Rovers and Blackpool.

© Copyright 2022 Reuters Limited. All rights reserved. Republication or redistribution of Reuters content, including by framing or similar means, is expressly prohibited without the prior written consent of Reuters. Reuters shall not be liable for any errors or delays in the content, or for any actions taken in reliance thereon.
Related News: Sunderland, Newcastle United, West Brom, Manchester United, Blackpool
COMMENT
Print this article 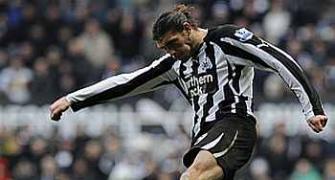