The tussle over scheduling of the national hockey camp ended on Monday, with Hockey India securing the Sports Ministry's permission to conduct it in Bangalore from Tuesday.

The Sports Ministry and Hockey India were engaged in a war of words over organisation of the camp, with the latter accusing the former of denying permission.

The ministry, on its part, said it was Hockey India that had changed the dates of the camp in order to scuttle World Series Hockey, an IHF initiative.

"The camp will begin in Bangalore tomorrow. We have also got approval on LTDP from the Sports Ministry," Batra told reporters after a Steering Committee meeting of the ministry.

The training camp was scheduled to start at the SAI centre in Bangalore from Monday, but Hockey India sources had said the Sports Ministry had not yet approved it.

A Sports Ministry source had said Hockey India had decided to organise the first phase of the national camp, leading up to London Olympics, from March 13 to April 27.

"The previous plan was to have the camp in Bangalore from March 13 but Hockey India changed it with malafide intentions so that those Indian players who were with WSH do not join it," said a source in the Sports Ministry.

"After everything was finalised, it was Batra who wrote a letter to us just a day after India qualified for the Olympics that the national camp be allowed to begin from March 5 with the fringe players taking part in it.

"The 18 players who were part of the team which beat France in the final of the Olympic qualifiers were to join on March 15 and the camp was to start with the remaining 30 fringe players," the source added.

However, Batra refused to go into these details.

"I don't want to go into those details now. The good thing is that the camp is begining from tomorrow."

Asked if action will be taken against those players competing in the unsanctioned WSH, Batra again chose not to comment.

"I don't want to say anything on that. Let the camp begin tomorrow and see who are the players who report to the camp," he said.

Batra also claimed that they have a green signal on the Indian team's proposed tour to Pakistan but it will be finalised only after getting the approval of other ministries.

"In principle we have got the permission, but we are yet to get permission from the Home and External Affairs ministry," he said.

On Tuesday to get a foreign coach and trainer for India's women's hockey team. 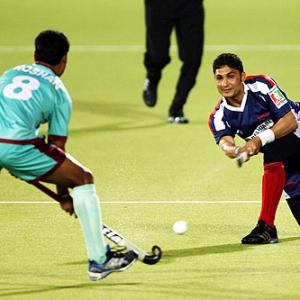