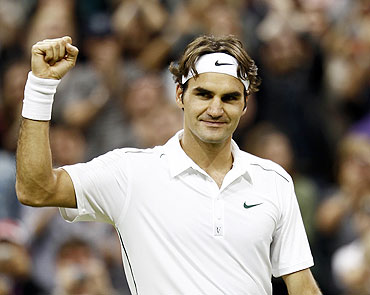 Roger Federer battered Adrian Mannarino so badly in a 6-2, 6-3, 6-2 romp on Thursday that the Wimbledon crowd began to root for the sorry Frenchman rather than their beloved six-times champion.

Like a rabbit caught in the Centre Court floodlights, the world number 55 was given a tennis lesson by the Swiss maestro in a second-round mismatch.

Federer, who next meets 2002 runner-up David Nalbandian, was forced to wait around all day after the earlier two Centre Court matches went the distance and he was in no mood to waste any more time in his first ever match under the rainproof roof.

He raced into a 3-0 lead in the first two sets with the crowd taking increasing pity on the left-handed Frenchman, who had no logo on his inexpensive shirt and too often fired his serves into the net.

'It's very nice to play indoors for the first time' The ever-diplomatic Federer did not mind the crowd urging on the underdog.

"The atmosphere was fantastic," the third seed told reporters.

"It's unusual, it's very nice to play indoors for the first time, I've played 10 years on Centre Court."

Such was the ease of the encounter that Federer began to drop his guard and a huge roar went up when Mannarino sent a superb a winning passing shot hurtling past the Swiss on his way to three break points.

Federer, though, simply cranked up the gears and stormed back to take the game and the second set before sealing victory to light applause, as if the crowd had become too accustomed to his beguiling brilliance.

They quickly fell in love with him again when streams of autograph hunters appeared at the end and Federer could well do with their support against tricky Argentine Nalbandian.

"I didn't enjoy playing against him too often," he said. "I expect it will be a difficult match." 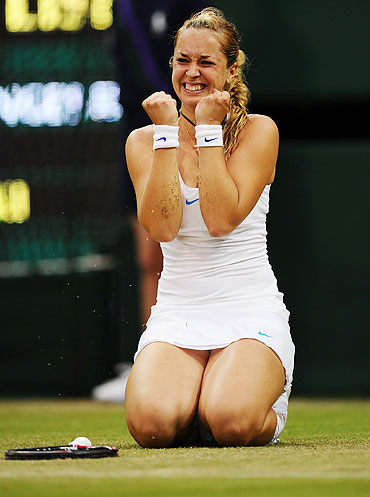 The third-seeded Chinese, who became the first Asian player to win a Grand Slam title earlier this month, squandered two match points in the third set to give Lisicki a chance which the 21-year-old 2009 quarter-finalist grabbed with both hands.

Lisicki, awarded a wildcard to the main draw following an ankle injury which put her on crutches last year, burst into tears as she dropped to her knees in celebration after booking a third-round clash with Japan's Misaki Doi, the world number 133.

"It was really really hard," said Lisicki, who had shown her potential on grass this month when she won at Edgbaston, her first title since 2009. "I had to start from zero having been on crutches for seven weeks.

"Winning the title in Birmingham meant so much to me. And of course getting the wildcard here, I appreciate that so so much. To be back in Wimbledon, a place I love so much.

"They (the crowd) really helped me when I was two match points down. I didn't know it could get so loud in there. It was amazing."

The match was played under Centre Court's retractable roof with rain splashing on the top when the players were warming up but it did not stop Li sporting a sun visor.

What had seemed to be a filler-in between two men's matches on the showpiece court, judging by the number of empty seats at the start as fans sought refreshments, turned into a thriller.

Li done in by Lisicki serves 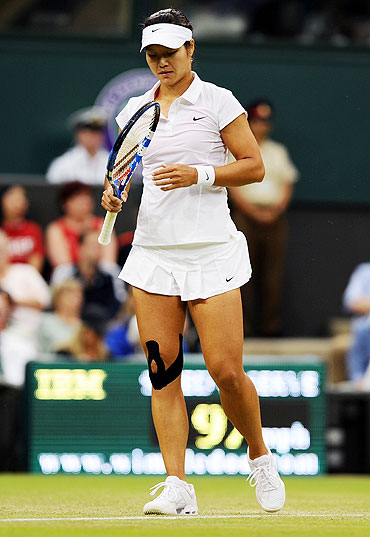 Li had looked to be heading for a straightforward victory after dominating from the baseline in the first set but Lisicki dug out some tricky dropshots to force the Chinese forward where the errors crept in.

The world number four handed Lisicki a break in the fourth game of the second set with a double fault and the German unleashed some fast serves, some of which were recorded at over 120 miles per hour, to surge 5-2 ahead.

"(From the) start of the first point till the end of the match, every serve was like around 117 miles. I mean, this is impossible for the women," Li told a news conference.

Neither player seemed to want to make it easy for themselves as Lisicki dropped serve when serving for the set in the ninth game but she broke back immediately to level the match.

The fast serves kept raining down, with Li powerless to stop herself overhitting her returns even if her sizzling crosscourt backhands kept her very much in the match.

The finishing line was in sight when she earned herself two match points on the Lisicki serve but she twice sent shots into the net and her chance slipped away.

Buoyed by her narrow escape and a wave of support for the underdog, Lisicki kept her nerve to set up her own match points and she sealed an emotional victory on her third when Li sent a forehand wide.

Soderling fights back to beat Hewitt in thriller 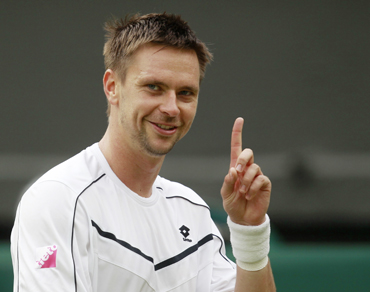 Earlier, Robin Soderling fought back from two sets down to beat Australian Lleyton Hewitt 6-7, 3-6, 7-5, 6-4, 6-4 in a dramatic second-round match under the Centre Court roof at Wimbledon on Thursday.

The Swedish fifth seed looked to be on his way out of the tournament as a succession of unforced errors gifted the former champion a two-set lead.

Hewitt did not even need to show his trademark feisty qualities, keeping the ball in play and waiting for Soderling to put it in the net or out of court.

The Swede, twice French Open runner-up, found no answer to his problems and Hewitt looked certain to wrap up a straight-sets victory until Soderling conjured a break out of the blue to take the third.

Suddenly Soderling found the range on his booming serve and as the 30-year-old Hewitt began to tire he started making more unforced errors.

Soderling again managed to break his opponent's serve to take the set and the match headed into a decider.

'It was nice to see Hewitt injury-free' 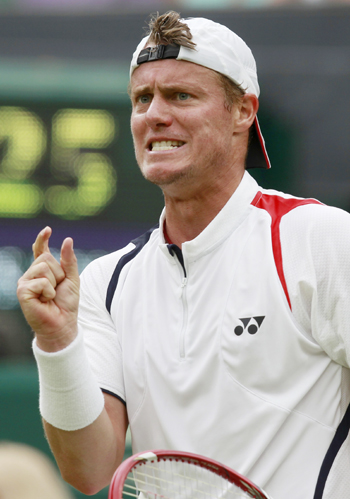 Lleyton Hewitt, cheered on by his loyal green-and-gold clad fans, tried to pump himself up and aided by a few cries of "C'mon" he broke Soderling's serve to lead 2-1.

But the Swede broke straight back and Hewitt soon found himself serving at 4-5 to stay in the match.

Soderling upped his game and a brilliant crosscourt forehand helped set up three match points, the first of which he converted when Hewitt lamely netted a forehand.

The victor sunk to his knees and punched his chest before the players left the court to a standing ovation.

"I knew if I could raise my game after the first two sets I had a good chance," Soderling said in a televised interview.

"It was nice to see him (Hewitt) injury-free and it was the best match we have ever played. He is a great fighter and he is playing better than for a while." 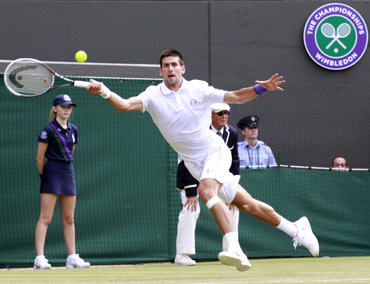 Novak Djokovic looked a man on a mission when he took just 15 minutes to blast to a 5-0 lead over Kevin Anderson at Wimbledon on Thursday and was somewhat frustrated when his opponent eventually made him work for almost two hours for his victory.

The number two seed eventually reached round three by triumphing 6-3, 6-4, 6-2, his second straight-sets win of the week, after another display of clinical efficiency on a breezy Court One.

Such is his heightened level of expectation in the wake of his recently-ended 43-match winning streak that Djokovic still did not look entirely happy, berating himself after a couple of late miscues.

"I may be hard on myself but I think every player is looking for perfection all the time and I'm really satisfied with my performances in the first two rounds," the Serb told reporters.

"Mentally I do have a different approach to Wimbledon than I had years before.

"It's obvious because of the winning streak that my confidence is very high and it makes it easier to step on the court because you believe in yourself and you know that you can win against anybody."

Ivanovic eased into the third round 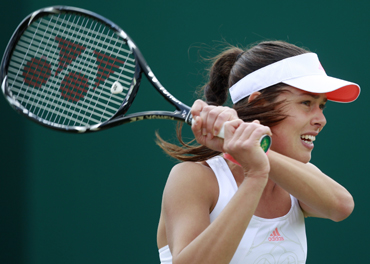 The former French Open champion had little trouble in booking a berth in the third round.

Sixth seed Francesca Schiavone, one of seven grand slam champions in the draw, beat Barbora Zahlavova 7-5 6-3 on her 31st birthday.

Russian 12th seed Svetlana Kuznetsova, who despite her powerful game and titles at the U.S. Open and French Open has never shone at Wimbledon, crushed Romania's Alexandra Dulgheru. 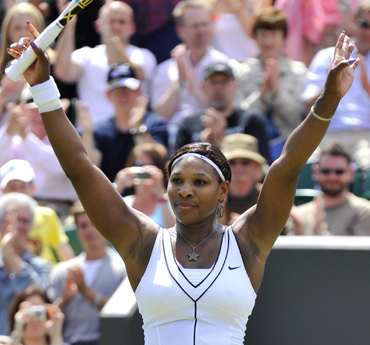 Champion Serena Williams safely negotiated another 107 minutes of her comeback as she settled back into the old routine with an ultimately comfortable 3-6, 6-2, 6-1 victory over Simona Halep in the second round of Wimbledon Thursday.

The American seventh seed, just four matches into the most challenging return of her career after injury and serious health issues sidelined her for 49 weeks, was initially troubled by the tenacious Romanian teenager before marching on.

Dispatched to Court Two, the atmospheric sunken bowl in the heart of the All England Club, the 29-year-old resembled a powerful sports car desperate for some open road in the early stages as Halep's accuracy had her stuck in first gear.

Despite being largely outplayed in the opener, there was never a sense of panic though and once she stemmed the flow of errors, began middling her forehand and booming down her mighty serve there was only ever going to be one outcome.

With both her opening rounds having gone the distance any questions marks over her fitness are vanishing fast and the odds on her claiming a fifth singles title at the All England Club will be shortening rapidly.

"I feel like I'm in shape," the American, who lacerated her foot on broken glass in Munich last year just weeks after beating Vera Zvonareva in the final here, told reporters. "I'm just playing my way into match condition.

"I'm just doing things that I did before. That's all. That's all I can do right now."