As Chelsea and Bayern Munich prepare to battle for honours in the final, here's a look at some memorable moments in this year's Champions League.

The only surprise was that nobody was sent off, not even Real substitute Marcelo who produced a scything tackle on Thomas Mueller in stoppage time.

There was also pulsating football amid the chaos as Franck Ribery fired Bayern ahead in the 17th minute and Mesut Ozil levelled with a soft equaliser early in the second half. Here's a look at some memorable moments in this year's Champions League.

Barcelona appeared in total control after taking a 2-0 lead, and with their opponents Chelsea reduced to 10 men after their captain John Terry was handed a red card in the 37th minute for kneeing Alexis Sanchez in the back, they appeared on the way to victory in the semi-final second leg at the Nou Camp.

Chelsea hit back unexpectedly when Frank Lampard sent Ramires clear in first-half added time and he lifted the ball brilliantly over the onrushing Barca goalkeeper Victor Valdes into the empty net.

Chelsea eliminated holders Barcelona 3-2 on aggregate and clinched a place in the Champions League final after an action-packed last-four clash in which Lionel Messi missed a penalty.

The semi-final second leg at the Nou Camp ended 2-2 and meant Chelsea, chasing a first European title, will take on Bayern Munich in the final. 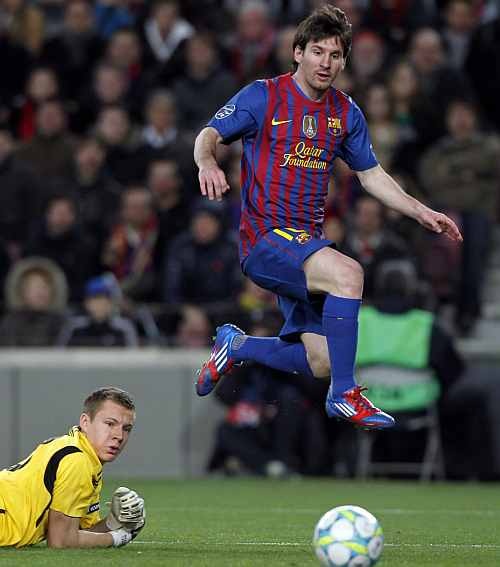 Lionel Messi at his breathtaking best tore Bayer Leverkusen apart with a record five-goal Champions League haul as Barcelona swept into the quarter-finals 7-1 on the night and 10-2 on aggregate.

The Argentine World Player of the Year became the first player to score five in a Champions League match. Substitute Cristian Tello scored twice as the holders equalled the biggest victory margin in the knockout stages of the competition.

Messi give Barcelona the lead when he sped on to Xavi's lofted pass and brilliantly scooped the ball over Bernd Leno in the 25th minute.

He added a second with a trademark run across the defence and low shot three minutes before halftime and completed his hat-trick with another stunning chip, this time with his right foot, four minutes after the break.

Tello netted twice either side of Messi's fourth, which came after Leno spilled the ball at his feet, and the Argentine wizard bagged his fifth with a powerful strike six minutes from time before Leverkusen substitute Karim Bellarabi scored in added time. 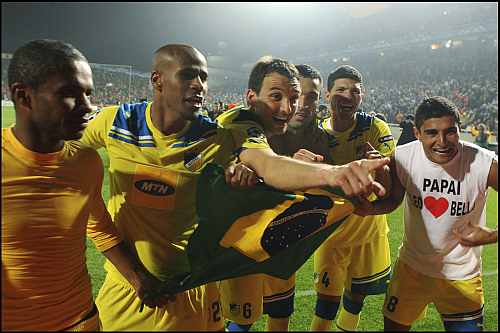 APOEL Nicosia again ripped the Champions League record books to shreds and kicked off an island party by becoming the first Cypriot team to make the last eight of any European competition.

A 4-3 win on penalties over Olympique Lyon after a deserved 1-0 home victory in their last-16 second leg followed the shock achievement of finishing top of their qualifying group in Europe's elite club competition.

Lyon's Alexandre Lacazette and Michel Bastos had their spot-kicks confidently saved by Dionisios Chiotis, who was also unlucky that Lisandro Lopez's penalty went in off his back.

APOEL scored all four of their spot-kicks with aplomb to send their team mates and fervent fans into delirium in the tight GSP Stadium, with Chiotis mobbed on the pitch.

Gustavo Manduca, sent off in extra time for a second booking, had earlier netted at the far post on nine minutes after Constantinos Charalambides had slid in a cross as APOEL levelled the aggregate scores after losing the first leg 1-0. 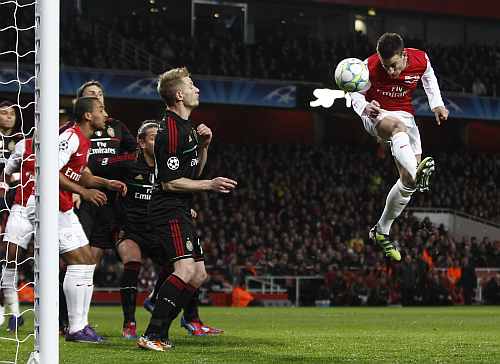 AC Milan survived an almighty scare against a rejuvenated Arsenal to scrape into the Champions League quarter-finals 4-3 on aggregate despite being thrashed 3-0 by the London side who almost pulled off mission impossible.

Milan's 4-0 win in the San Siro left Arsenal with a five percent chance of survival, according to manager Arsene Wenger, but his team struck three times in a barnstorming first half to threaten the greatest of European Cup escapes.

The Serie A champions were shocking in the first half as goals from Laurent Koscielny, Tomas Rosicky and a Robin van Persie penalty meant their lead all but evaporated.

Milan, who have won the trophy seven times, came to their senses after the break to win the last 16 tie but their fans, aware of a similar second-leg collapse against Deportivo Coruna in 2004, had their nerves shredded on a night of raw tension.

Van Persie, who scored a superb late winner against Liverpool last weekend, botched a glorious chance to level the tie early in the second half when he scooped an effort straight into the arms of Christian Abbiati and Arsenal ran out of steam. 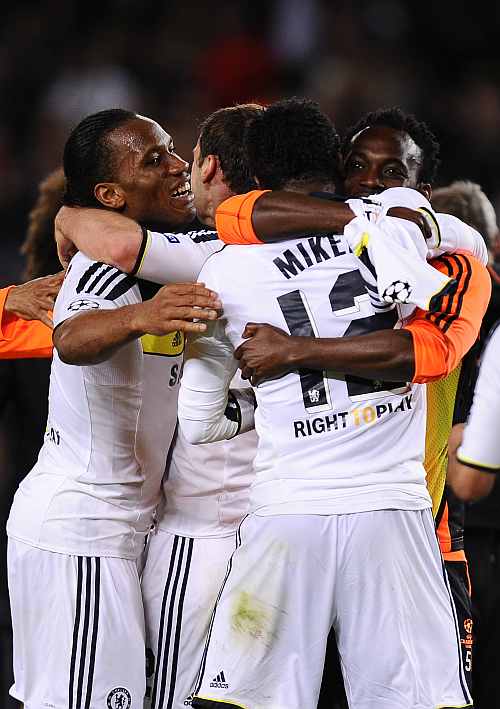 Chelsea's old guard masterminded one of the club's greatest European escapes to reach the Champions League quarter-finals, beating Napoli 4-1 after extra time at Stamford Bridge to edge an electrifying tie 5-4 on aggregate.

Serbian Branislav Ivanovic smashed home the winning goal in the 105th minute of an enthralling clash to keep the English flag flying in the competition after both Manchester clubs and Arsenal had fallen by the wayside.

Trailing 3-1 from the first leg, it was Chelsea's much-criticised 30 somethings who provided the inspiration having struggled domestically under recently sacked coach Andre Villas-Boas.

Didier Drogba opened the scoring and captain John Terry's header made it 2-0 just after the interval only for Napoli to regain the advantage through Gokhan Inler's low drive.

Frank Lampard's penalty 15 minutes from time made it 4-4 on aggregate to send the tie into extra time and it was the 34-year-old Drogba who again showed his class, providing the perfect cut back for Ivanovic to send Chelsea through.

"He finished it unbelievably, like a striker really," Lampard said. 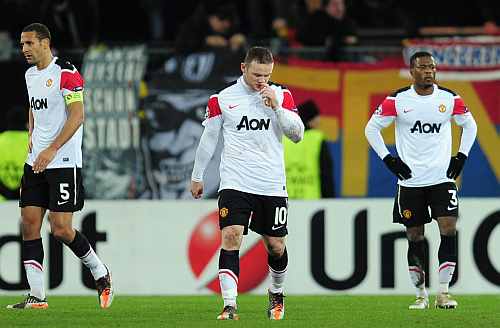 Image: Manchester United players walk off the pitch after their loss against FC Basel

Manchester United, Champions League finalists in three of the last four seasons, were knocked out of the group stage after a humbling 2-1 loss at FC Basel on Wednesday, one of their unhappiest nights in European competition.

Marco Streller and Alexander Frei, who both quit the Switzerland national team this year, scored early and late to take the Swiss champions beyond the group stage for the second time in four attempts.

Phil Jones scrambled a late goal for lacklustre United, for whom winger Nani carried the most attacking threat as striker Wayne Rooney had another frustrating evening.

It was only the third time in 17 Champions League participations, all under manager Alex Ferguson, that United had failed to progress beyond the group stage.

Needing only a draw to qualify, United were quickly in trouble when De Gea misjudged Xherdan Shaqiri's cross and prodded the ball with his foot straight to Streller who scored from close range despite mishitting his shot.

United still had plenty of time to put things right and dominated the game, although, with the impish Shaqiri in midfield, Basel were always dangerous in attack.

Rooney, who scored two goals in England's 3-1 win over Switzerland at the same stadium last year, nearly levelled with a shot on the turn from Ryan Giggs's pass which was well stopped by Yann Sommer.

He missed an outstanding chance just after the break when another Giggs pass sent him clear down the left but he shot wide of the far post. 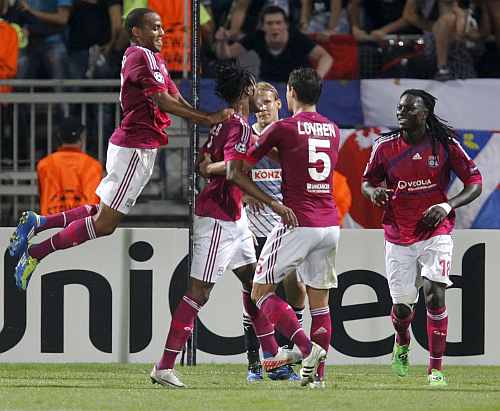 Olympique Lyon staged an astonishing fightback to earn a 7-1 win at 10-man Dinamo Zagreb in their Champions League Group D match and reach the knockout stage of the competition.

The French side went through after Ajax Amsterdam, who started the night three points ahead of them with a vastly superior goal difference, were beaten 3-0 at home by group winners Real Madrid.

Lyon's challenge looked all but over when they fell behind to a Mateo Kovavic goal in the 40th minute, after Dinamo had their midfielder Jerko Leko sent off for a second bookable foul midway through the first half.

But the French side's striker Bafetimbi Gomis led their revival with four goals, with Maxime Gonalons, Lisandro Lopez and Jimmy Briand netting the other three to send them into the last 16 of Europe's premier club competition.

Gomis's first three goals in the space of seven minutes either side of halftime are a Champions League hat-trick record.