Sign in  |  Create a Rediffmail account
Rediff.com  » Sports » 'It was not revenge for Daegu, I just came here to win'

'It was not revenge for Daegu, I just came here to win' 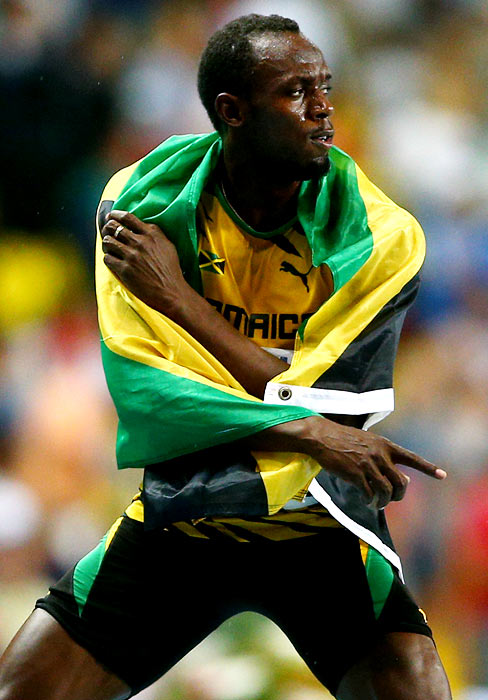 Usain Bolt was made to look human by a combination of a Russian rainstorm and a fired-up Justin Gatlin on Sunday but the Jamaican superstar was still good enough to regain his world 100m title in a surging 9.77 seconds.

With former world and Olympic champion and twice-banned doper Gatlin leading at halfway, Bolt was forced to race a rival, rather than the clock, although his time was still the second-fastest of the year behind the 9.75 of Tyson Gay, absent from Moscow after testing positive.

The victory made amends for the one blot on the Jamaican's extraordinary copybook, his disqualification from the 2011 final after a false start, and underlined his priceless value to his sport in the wake of a surge of doping cases.

"My legs were sore after the semis and the world record wasn't on so I came out just to win."

'My legs were sore after the semis' 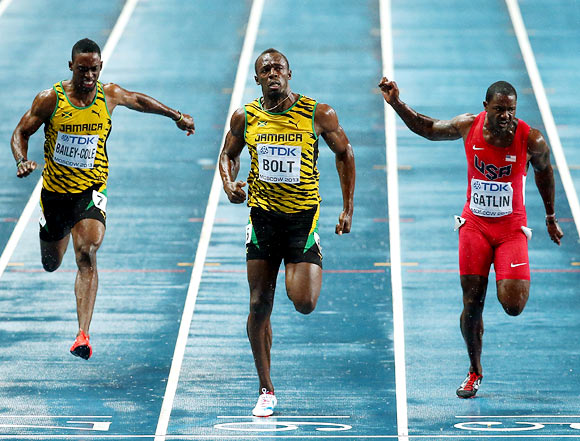 However, it seems that even the presence of Bolt and local heroine Yelena Isinbayeva was not enough to persuade Muscovites to give up their Sunday evening as his performance, devoured by millions around the world on TV, was witnessed by maybe around 30,000 fans in the 81,000-capacity Luzhniki Stadium, reduced to 50,000 for this event.

The swathes of empty seats will come as something of an embarrassment to the organisers, already fighting a rearguard action in the wake of a series of damaging high-profile doping cases.

Those who stayed away missed the host nation's first gold of the championships, for 20-year-old 20km walker Aleksandr Ivanov, the third successive win for Russia in the event.

There were also impressive victories for Americans Ashton Eaton in the decathlon and Brittney Reese in the long jump while Ethiopia's remarkable Tirunesh Dibaba claimed yet another 10,000 metres title and hot favourite Croatian Sandra Perkovic won the discus.

But the night was always about the 100 metres final and that means it was all about Bolt.

'The world record wasn't on' 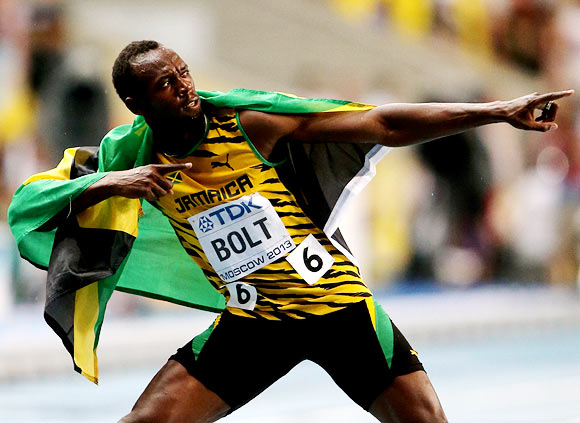 He had gone through the rounds comfortably enough, though he looked a little pensive and when a hot, humid day gave way to a thunderstorm minutes before the race, there was the merest hint that things might not go so smoothly.

Gatlin, who handed the Jamaican a rare 100 defeat early in the year when he was short of full fitness, started well and was leading at halfway but Bolt reeled him in at 60 metres and drove through the line.

Carter held off two more Jamaicans - Kemar Bailey-Cole and Nickel Ashmeade for bronze as a potential relay time finished in the top five.

While Bolt is undoubtedly the biggest name in the sport, he is the first to cede the title of the world's greatest athlete to Eaton and the American is unquestionably worthy of the tag after he winning the world title in style to complete a spectacular hat-trick having won Olympic gold and broken the world record last year.