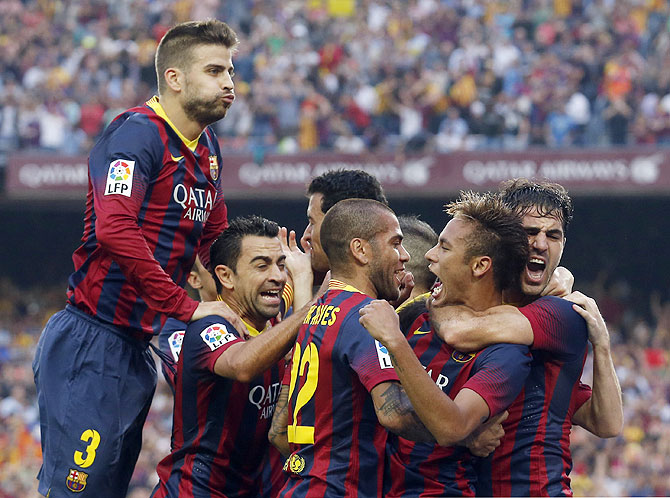 Barcelona drew first blood against arch-rivals Real Madrid by winning the opening 'Clasico' of the season 2-1 at the Nou Camp at the weekend.

AS Roma won their ninth straight game, maintaining a remarkable 100 percent record in Serie A, by securing a dramatic late 1-0 victory at Udinese.

Arsenal beat managerless CrystalPalace 2-0 to stay top in England while Bayern Munich stretched their unbeaten Bundesliga run to 35 games with a 3-2 triumph at home to promoted Hertha Berlin.

Leaders Barcelona opened a six-point gap on third-placed Real Madrid when Brazilian Neymar and substitute Alexis Sanchez struck in a 2-1 victory for the champions in Saturday's 'Clasico' at the Nou Camp.

Neymar opened the scoring in the 19th minute and Chile international Alexis made it 2-0 with a sublime 78th-minute chip before Jese pulled a goal back for Real in the first minute of added time.

Second-placed Atletico Madrid stayed hard on Barca's heels and opened a five-point lead over city neighbours Real thanks to a thumping 5-0 win at home to struggling Real Betis on Sunday.

On a near-perfect night at the Calderon, teenager Oliver Torres scored one of the fastest La Liga goals after just 14 seconds, David Villa struck twice and league top scorer Diego Costa netted his 11th of the season.

Unbeaten Barca have 28 points from 10 games with Atletico on 27 and Real on 22, two ahead of promoted Villarreal who won 4-1 at home to Valencia on Sunday. 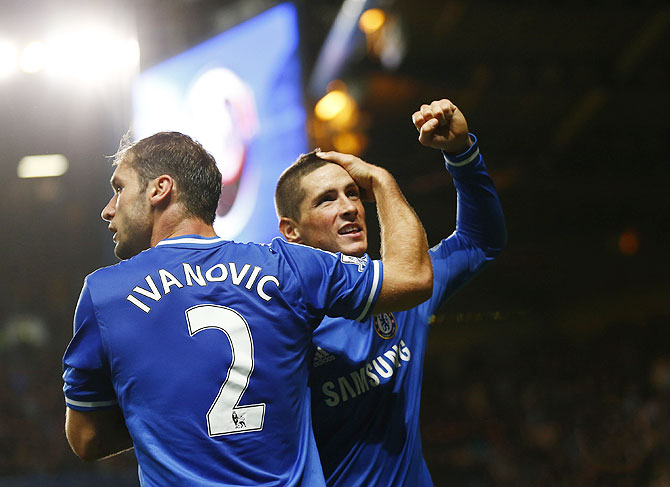 Arsenal maintained top spot in the Premier League after a 2-0 victory at managerless Crystal Palace, Mikel Arteta scoring a penalty before later being sent off as the Londoners moved on to 22 points from nine matches.

Fernando Torres netted a last-minute winner for Chelsea, a 2-1 victory over Manchester City keeping Jose Mourinho's side two points adrift of Arsenal and on the same points as third-placed Liverpool who thumped West Bromwich Albion 4-1 thanks to a Luis Suarez hat-trick.

Goals in the final 12 minutes from Wayne Rooney and Javier Hernandez spared Manchester United's blushes as the champions came from 2-1 down to beat Stoke City 3-2 at Old Trafford. 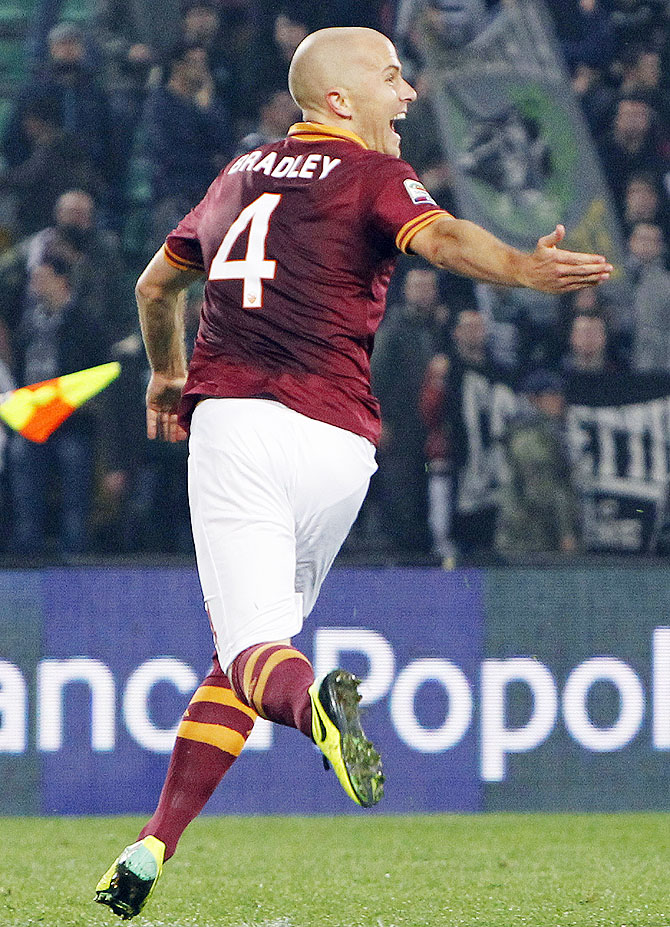 Image: AS Roma's Michael Bradley celebrates after scoring against Udinese during their Serie A match at the Friuli stadium in Udine on Sunday
Photographs: Alessandro Garofalo/Reuters

A long-range Michael Bradley strike eight minutes from time helped 10-man AS Roma beat Udinese 1-0 to win their ninth straight league match and stay five points clear at the top of Serie A.

Esteban Cambiasso notched his 50th goal for Inter Milan as they outclassed Hellas Verona 4-2 and moved up to fourth place. 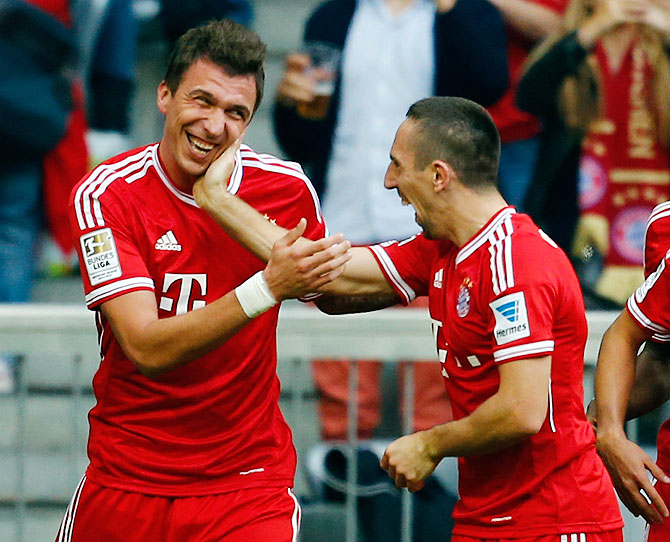 Bayern Munich had to work hard to defeat promoted Hertha Berlin 3-2 and extend their unbeaten run to 35 league games, one short of the record held by Hamburg SV.

Third-placed Bayer Leverkusen have the same 25-point total as Dortmund after beating Augsburg 2-1. 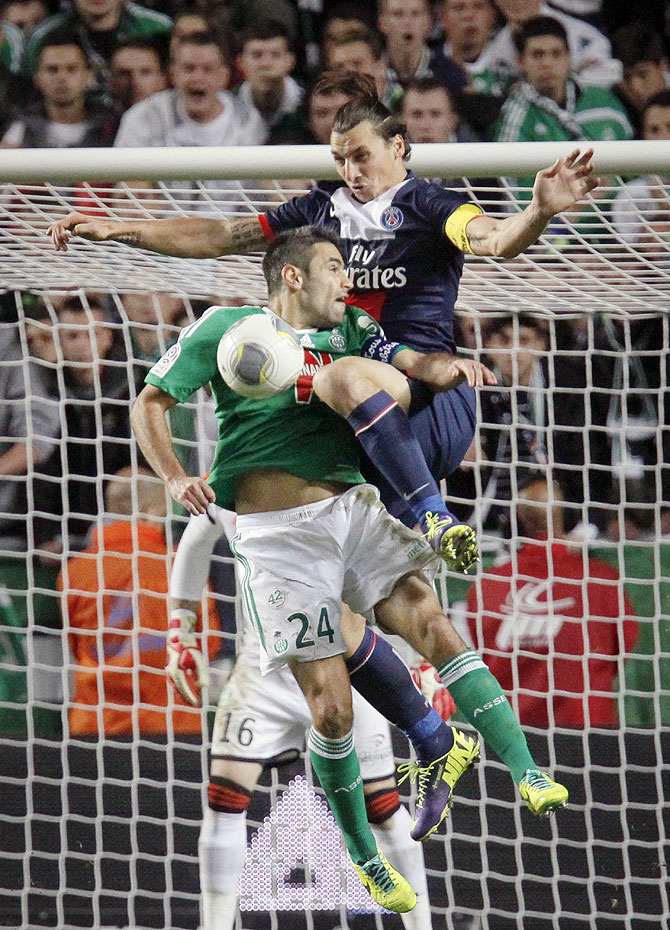 Paris St Germain kept their lead in Ligue 1 with a last-gasp equaliser in a 2-2 draw at 10-man St Etienne.

St Etienne went 2-0 ahead thanks to Benjamin Corgnet and Romain Hamouma but Edinson Cavani grabbed his seventh league goal of the season to reduce the deficit and Blaise Matuidi netted a stoppage-time leveller.

Les Verts were reduced to 10 men when Fabien Lemoine picked up a second yellow card shortly before the hour mark.

PSG, who have 25 points from 11 games, lead Monaco on goal difference after Radamel Falcao scored in a 2-1 win for the principality club at home to Olympique Lyon.